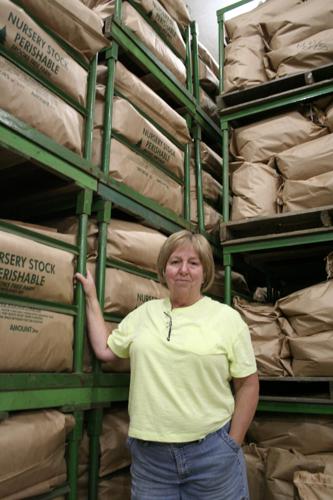 Kathy LeCompte, owner of Brooks Tree Farm in Salem, Ore., stands before bags packed with tree seedlings inside a cooler at her nursery. 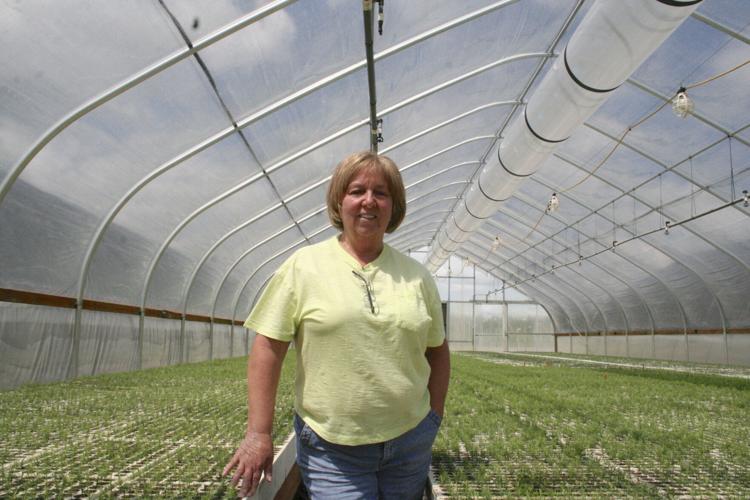 Kathy LeCompte, owner of Brooks Tree Farm in Salem, Ore., inspects conifer seedlings growing in a greenhouse at her nursery. 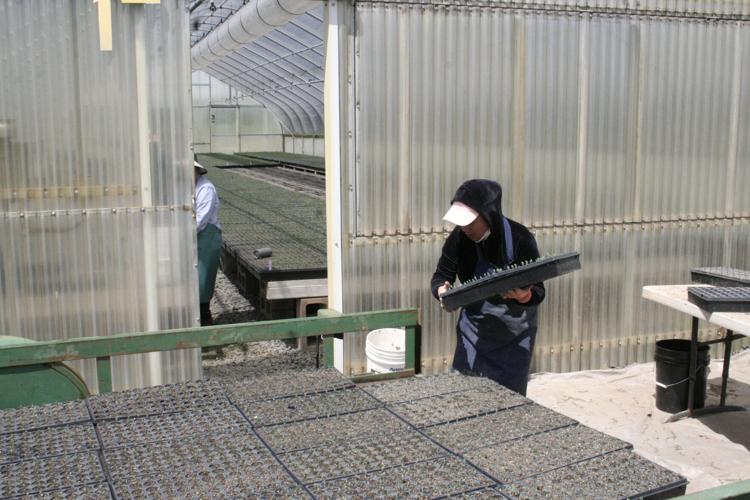 Workers at Brooks Tree Farm in Salem, Ore., load trays with seedlings onto a cart. 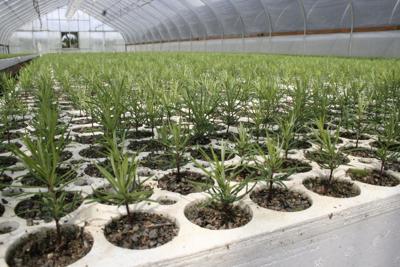 Thousands of tiny container-grown tree seedlings are braving the elements at Brooks Tree Farm this year, forced outside by insufficient greenhouse space.

Though it’s harder to regulate moisture and temperature outdoors, Kathy LeCompte wants to make every square inch count at her nursery near Salem.

Conifer seedlings are in high demand after record wildfires in 2020 burned more than 1 million acres of Oregon’s forests, compelling landowners to salvage timber and replant their properties at an accelerated rate.

The sudden need for more seedlings couldn’t have been anticipated by tree nursery managers, who generally plan their conifer tree crops years ahead of time.

The devastating late summer wildfires occurred only a few months before the winter reforestation season — nowhere near enough time to significantly increase production.

“There’s no opportunity to gear up and plug out more,” LeCompte said. “We have what we already have.”

A severe ice storm and then a lack of rainfall in early 2021 has aggravated the problem, since many recently-planted seedlings have failed to survive and must be replaced.

“Even people who were able to get trees are losing a high percentage of those plants,” she said.

Generally, the Douglas fir seedlings needed by forestland owners require two years to grow in the field from seed to harvest.

Container-grown seedlings can be produced in a single year, but greenhouse space also can’t be conjured up at the snap of the fingers.

“There is a shortage just due to the nature of production for a long-cycle product like a tree,” LeCompte said.

Even though nursery owners are responding to the market, they face several constraints on how quickly they can push out new seedlings.

Because conifer seedlings must be harvested in wintertime, when they’re dormant, they can’t be cultivated in just any field.

Tractors would get stuck in wet clay during the rainy season, so outdoor seedling producers are limited to well-drained river-bottom land that comes at a premium, said Bob McNitt, founder of the Forest Seedling Network, an online marketplace for independent buyers and sellers.

“It’s very difficult to get ground you can grow seedlings on,” he said, noting that other crops compete for the same properties.

Seeds are another limiting factor, since conifers don’t produce large numbers of cones every year.

The timber industry commonly weathers periods of low seedling production, but the 2020 crop was looking healthy. However, the heavy smoke from wildfires hampered cone collection.

A surge of investment in new greenhouses and other production facilities isn’t likely, since the equipment for harvesting and storing seedlings is too expensive for a potentially short-term boost in demand.

“It’s not the kind of business someone can jump into quickly,” LeCompte said. “You have to be committed for a long period of time to decide to do this.”

The impact on landowners will depend in part on how swiftly they reacted to the situation.

“We know they won’t be able to get seedlings in the amount of time they need,” said Amy Jahnke, executive director of the Oregon Small Woodlands Association.

Smaller forestland owners may be more reactive than proactive, waiting to order seedlings until after they log trees rather than long beforehand, said Steve Akehurst, regional marketing manager for IFA Nurseries, a seedling producer based in Wilsonville, Ore.

Some industrial timber companies, meanwhile, immediately understood the implications of last year’s record-setting blazes, he said. “We were getting increased seedling orders while the fires were still burning.”

“We usually have extra seedlings,” he said. “All those are being sucked up by industry.”

Under Oregon law, land must be replanted within two years of logging, but the state’s Department of Forestry can provide extensions if landowners provide documentation they tried to obtain seedlings but were unable to due to circumstances beyond their control.

In reality, though, such extensions don’t provide a total solution for the seedling shortage, since regulations aren’t the only reason that landowners are eager to replant.

Getting trees in the ground shades streams inhabited by sensitive fish while stabilizing soils that may otherwise be prone to erosion and landslides.

“We’d rather see the growth in production as soon as possible,” said Yarbrough, the forester.

Landowners are averse to reforestation delays because that equates to logging delays in the long run, said Roger Beyer, lobbyist for the Oregon Small Woodlands Association.

“That doesn’t make any financial sense,” he said. “If your land’s not producing, it’s not making you any money.”

While the seedling shortage is considered a hassle for the timber industry, it’s expected to abate with time.

Nurseries rotate through various parcels in their land inventory, so they can adapt to the added demand by putting more fields into production, said Jan Hupp, co-owner of Drake’s Crossing Nursery near Silverton, Ore.

One acre can produce 150,000 to 200,000 seedlings, so the timber industry’s needs can be accommodated, he said. “We’ve got that in our inventory, it just depends on how much we want to plant.”

Akehurst of IFA Nurseries said the demand spike is “not unmanageable” because relatively small adjustments in greenhouse space and field production can go a long way in generating additional seedlings, he said.

“In the short term, there’s going to be a pinch, but it will work itself out in the next few years,” he said. “There’s been projections of catastrophic seed shortages but we just don’t see that happening.”