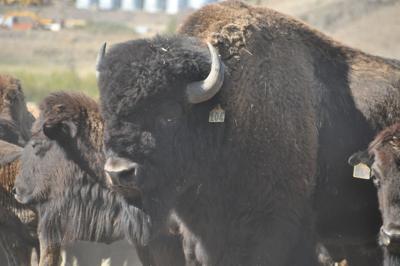 ENTERPRISE — The ebbs and flows in the cattle industry are what led Bob Stangel to begin the process of converting the family cattle operation to a bison haven now known at the Stangel Bison Ranch.

Now, close to 35 years after completing that transition, the ranch is one of the top bison producers in the region, finding ample success in what has been a growing niche market.

"Cattle used to run in cycles, they do still somewhat, but it was maybe more dramatic then," Bob Stangel, co-owner and operator, said standing in one of the family's pastures north of Enterprise. "It would cycle up and down in price. It would make it hard to make a living on them or make enough money with them from year to year. So we tried the buffalo, and it worked for us."

Bob's parents moved to Wallowa County in 1958, buying land that for at least two decades was home to a grain and cattle operation. He said the family saw stories of farmers raising buffalo, and in 1979 dove into the industry with the first purchase from Colorado: six bison heifers and two bull calves.

Today, that purchase — and subsequent trips back to the Midwest to help build the herd and introduce new bloodlines to prevent inbreeding — has turned into an operation that sees the Stangels take care of between 500-600 bison depending on the time of year, Theresa Stangel, ranch marketing and sales manager and Bob's daughter, said.

There are differences in how bison and cattle are raised, perhaps one of the bigger ones being that the bison grown for meat are kept longer than cattle. Theresa Stangel said it's usually after an animal reaches 2-1/2 years old — and up to a year past that age — that it's slaughtered.

"One of the things with having animals that you butcher later — so like when we butcher at 2-1/2 to 3-1/2 — they've had a little bit more time to develop that flavor in their meat … (it can) have a little more of a robust or umami savory flavor, but it's not gamey like deer and elk can be," she said.

The Stangels also made the switch close to 15 years ago to a full grass-fed operation.

"It's (naturally) a lot leaner than beef, and especially being grass fed it'll be leaner than something grain fed," she said.

Bob Stangel noted another benefit of being grass-fed.

"The grain-fed and grass-fed comparison is that ... they'll have a higher Omega 3 content in the meat and fats (being grass-fed) than what the grain-fed (provides)," he said.

Roughly 120 of the Stangels' animals are butchered each year. The Stangels work with a USDA processing plant in Nampa, Idaho, for most of their retail sales. They also sell wholesale and direct, including to local restaurants.

"We have a pretty diversified clientele," Theresa Stangel said.

It was direct sales, in fact, that took off while other portions of the industry dropped during the COVID-19 pandemic.

"It definitely shifted our sales," she said. "Restaurant sales were down substantially, our quarters, halves and wholes were quite a bit higher. Last summer, I didn't go to several farmers markets or have a lot on hand as far as inventory.

"One of our distributors, he's primarily restaurant sales, 80% of his (sales) went away overnight. (In) the grand scheme of things we were affected, but we were fortunate."

Since Theresa, who had a teaching degree, returned to Enterprise to join the business, the Stangels have expanded to more than just meat, also selling byproducts such as bison hides and skulls, and tallow to produce soap. The Stangels work with another Wallowa County business, Sally B. Farms, on the soap.

"(We're) always looking to utilize as much of the animal as possible," Theresa Stangel said.

Long term, the plan is for the business to one day be handed down to the next generation, though it at times is a challenge to convince Bob to take a breather, Theresa quipped.

"It's OK to take a day off and go do something," she said of what they often have to tell her dad.

For more information on the Stangel Bison Ranch, visit: stangelbisonranch.com or call (541) 426-4919.