You have permission to edit this article.
Edit
Home
Subscriber Services
Cover Story
The Land
Making a Living
The Culture
Features
Views
e-Edition
Share This
1 of 9 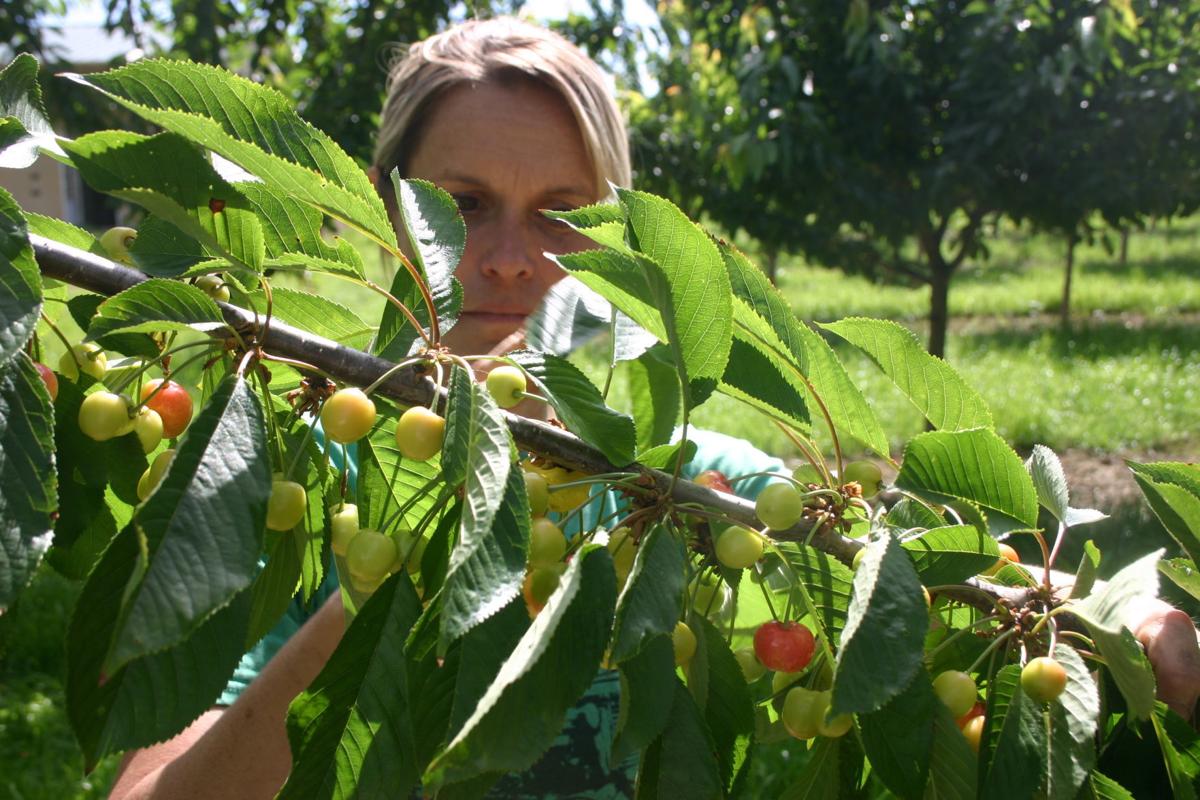 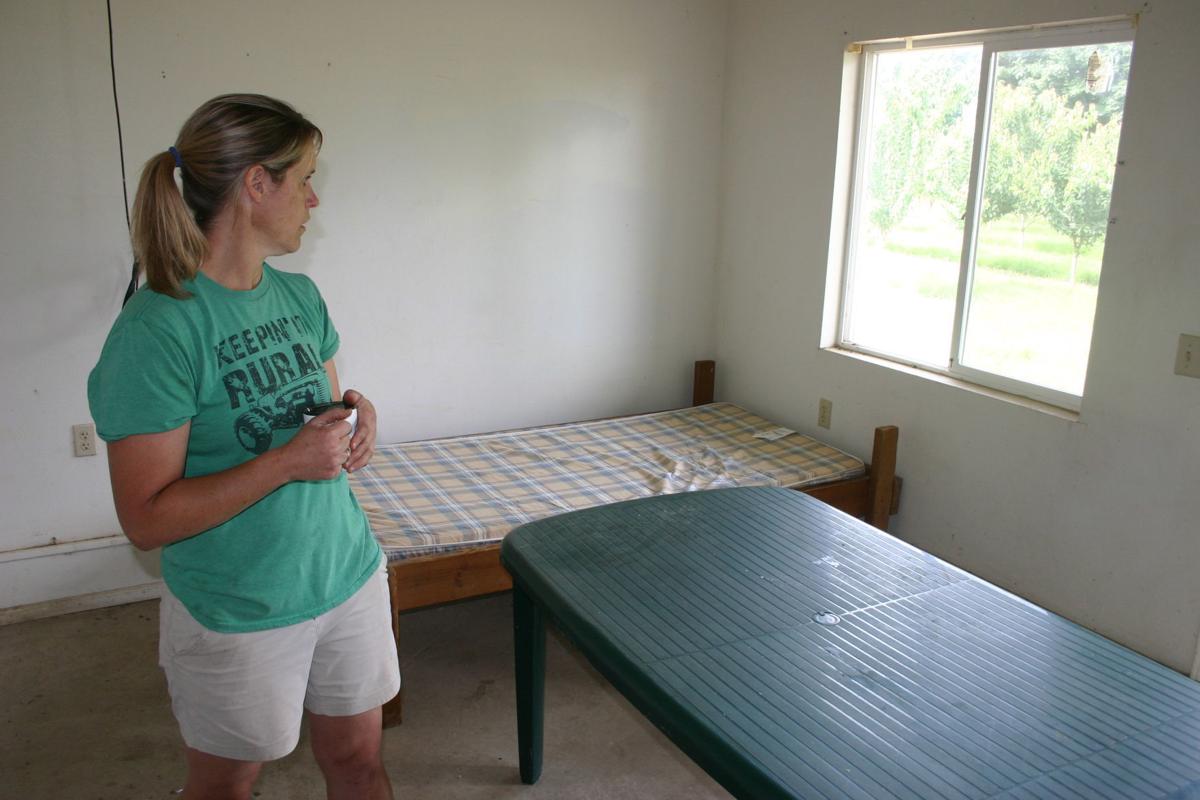 Molly McCargar, a fourth-generation farmer at Pearmine Farms in Gervais, stands inside one of the cabins at the farm's labor camp, which are in the process of being reconfigured to comply with COVID-19 worker protections. 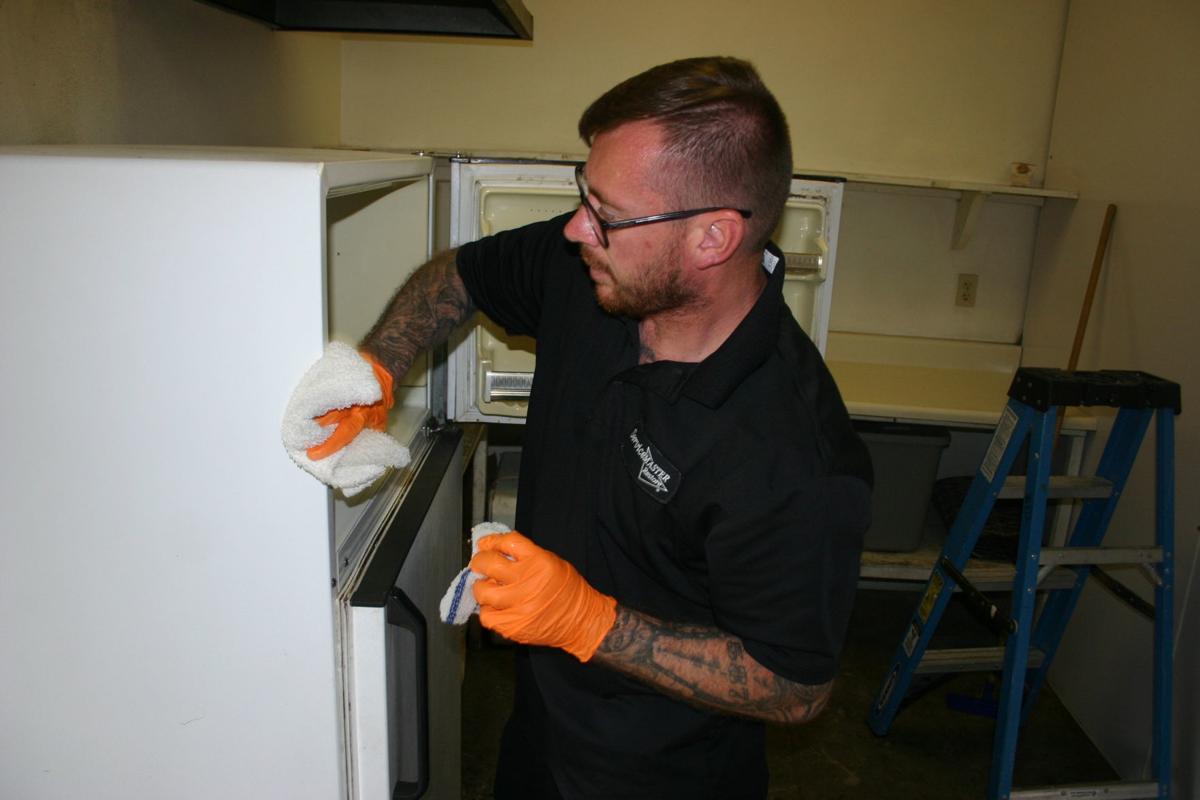 Kyle Birr, with ServiceMaster of Salem, scrubs a refrigerator while deep-cleaning the labor camp at Pearmine Farms ahead of cherry harvest. 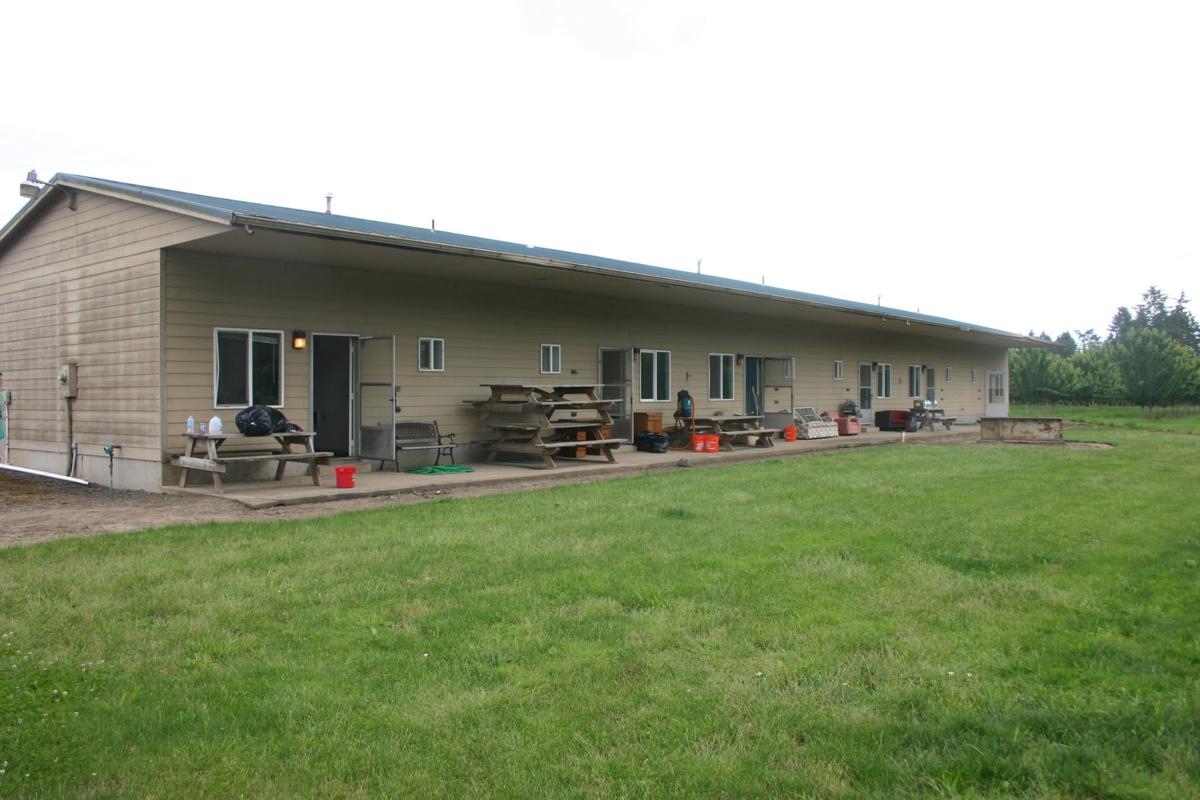 The labor camp at Pearmine Farms in Gervais consists of 12 cabins where workers stay during cherry harvest, which usually begins in early June. 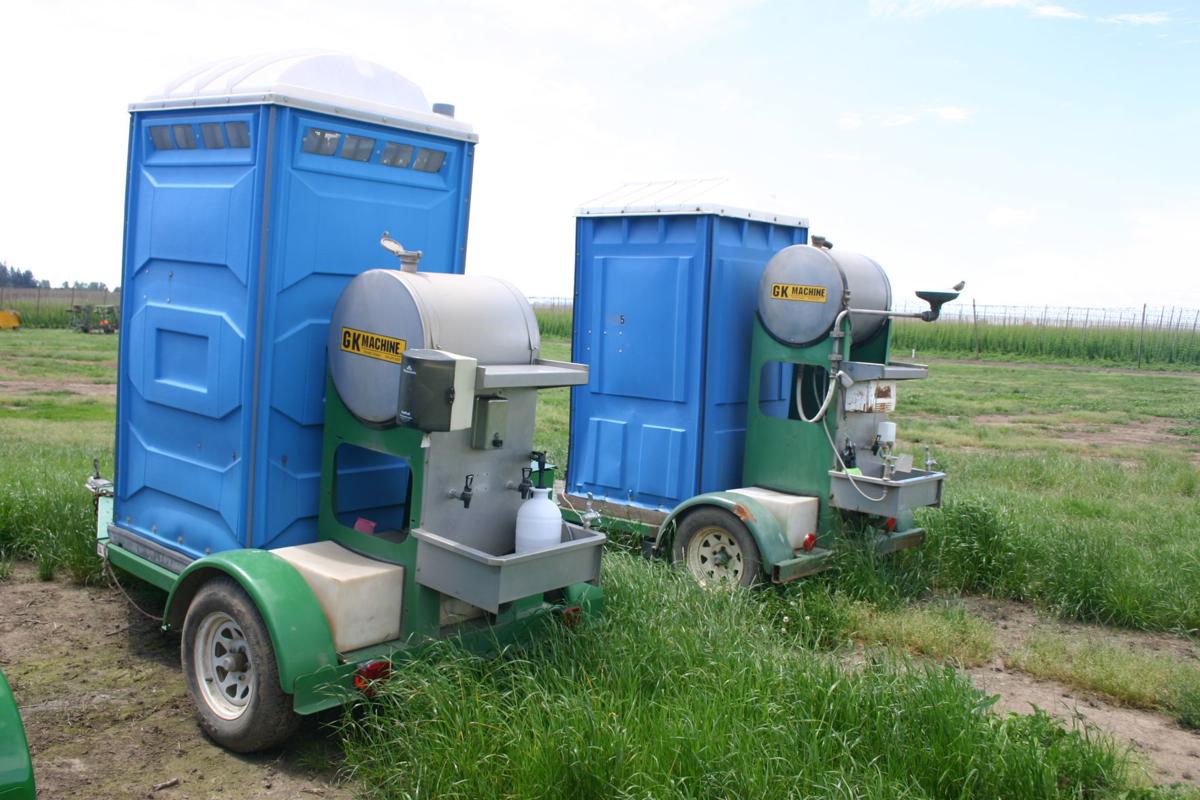 Part of the COVID-19 temporary rule issued by Oregon OSHA requires farms to provide one portable toilet and hand-washing station for every 10 workers in the field. The normal standard is one station for every 20 workers. 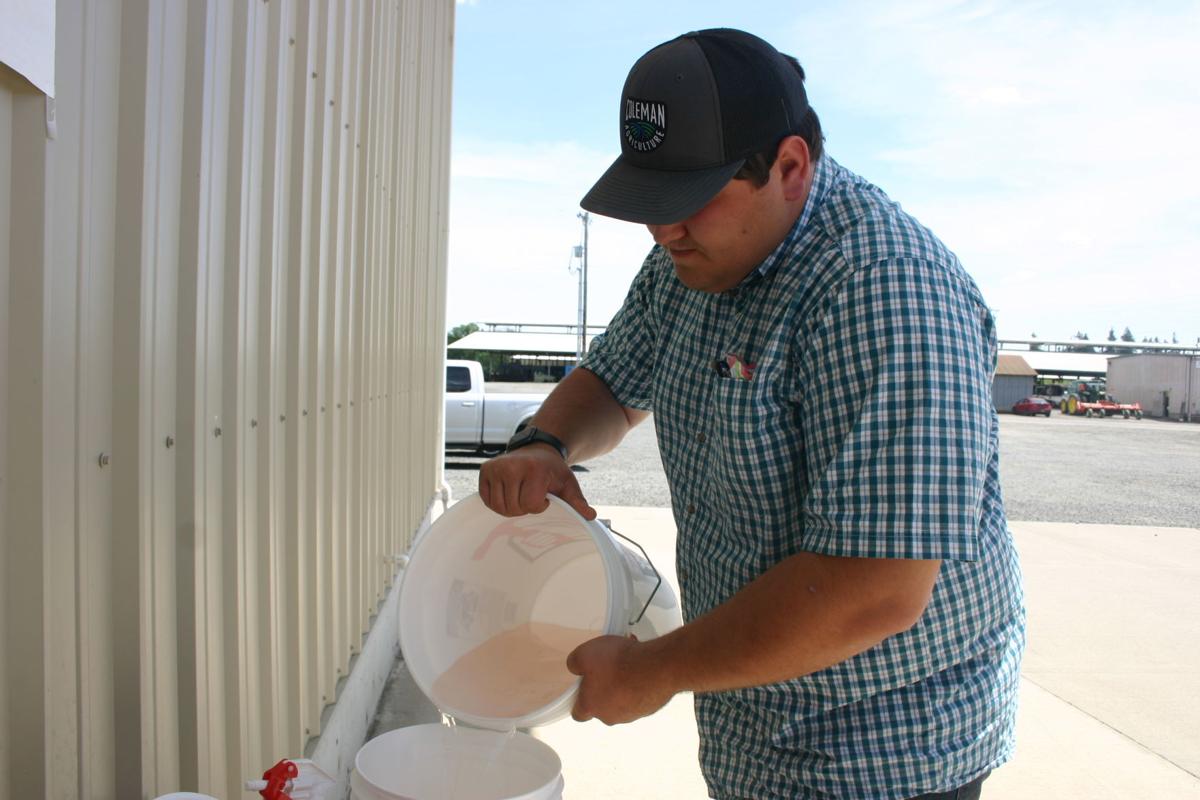 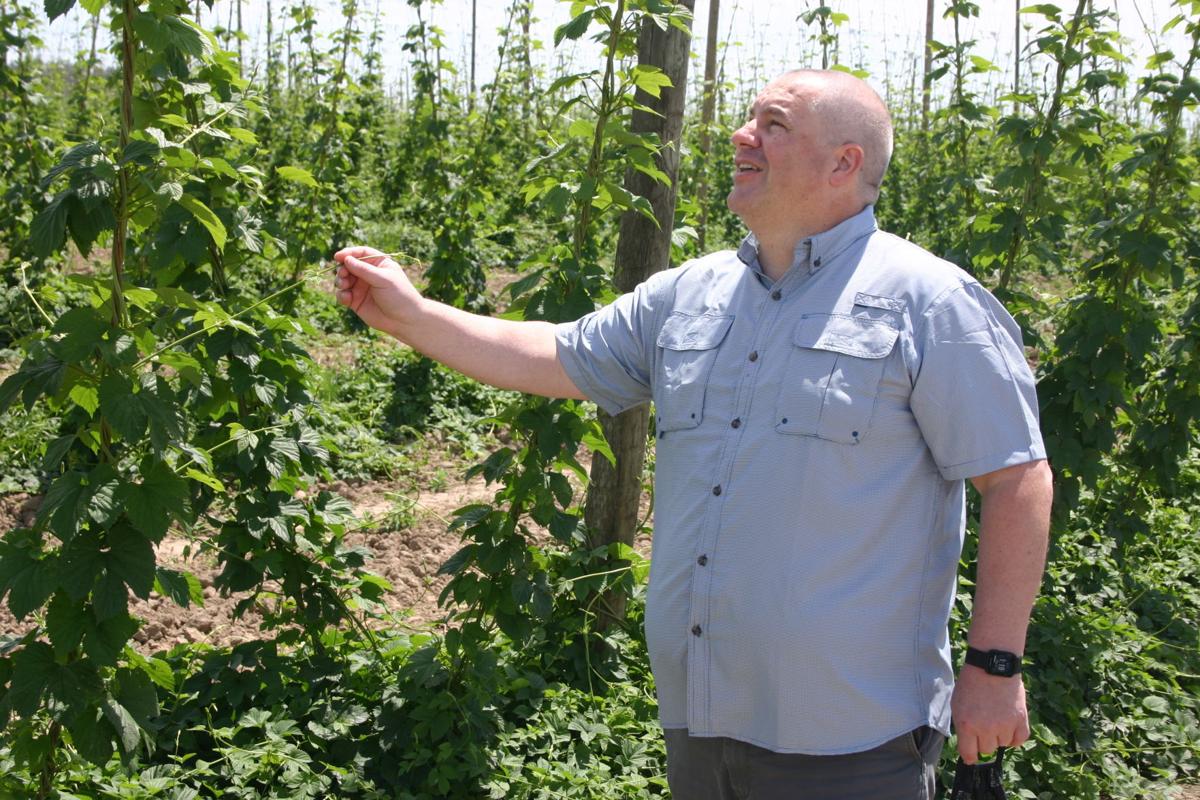 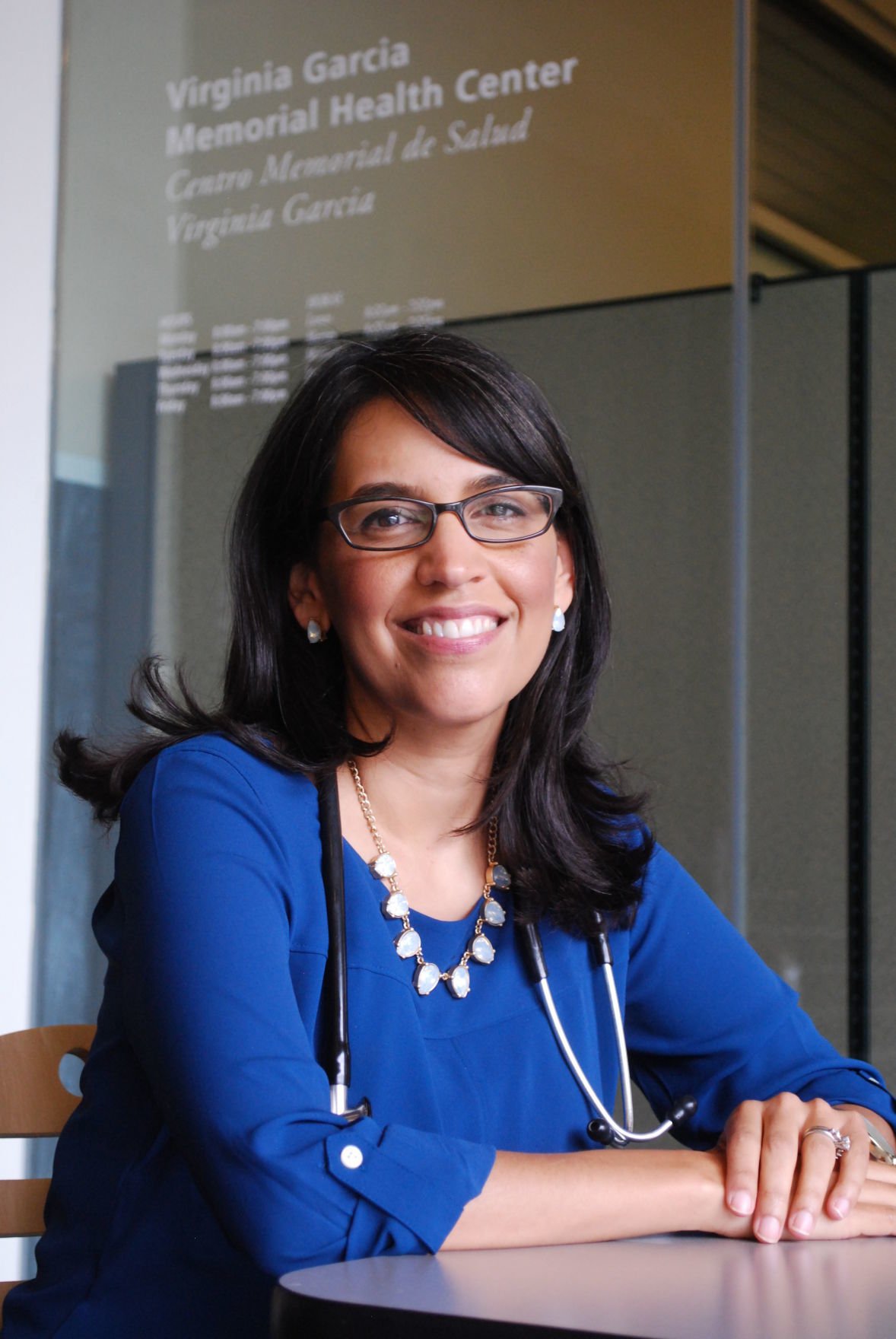 Dr. Eva Galvez, a physician with the Virginia Garcia Memorial Health Center, signed on in support of a petition requesting COVID-19 protections for migrant and seasonal farmworkers. 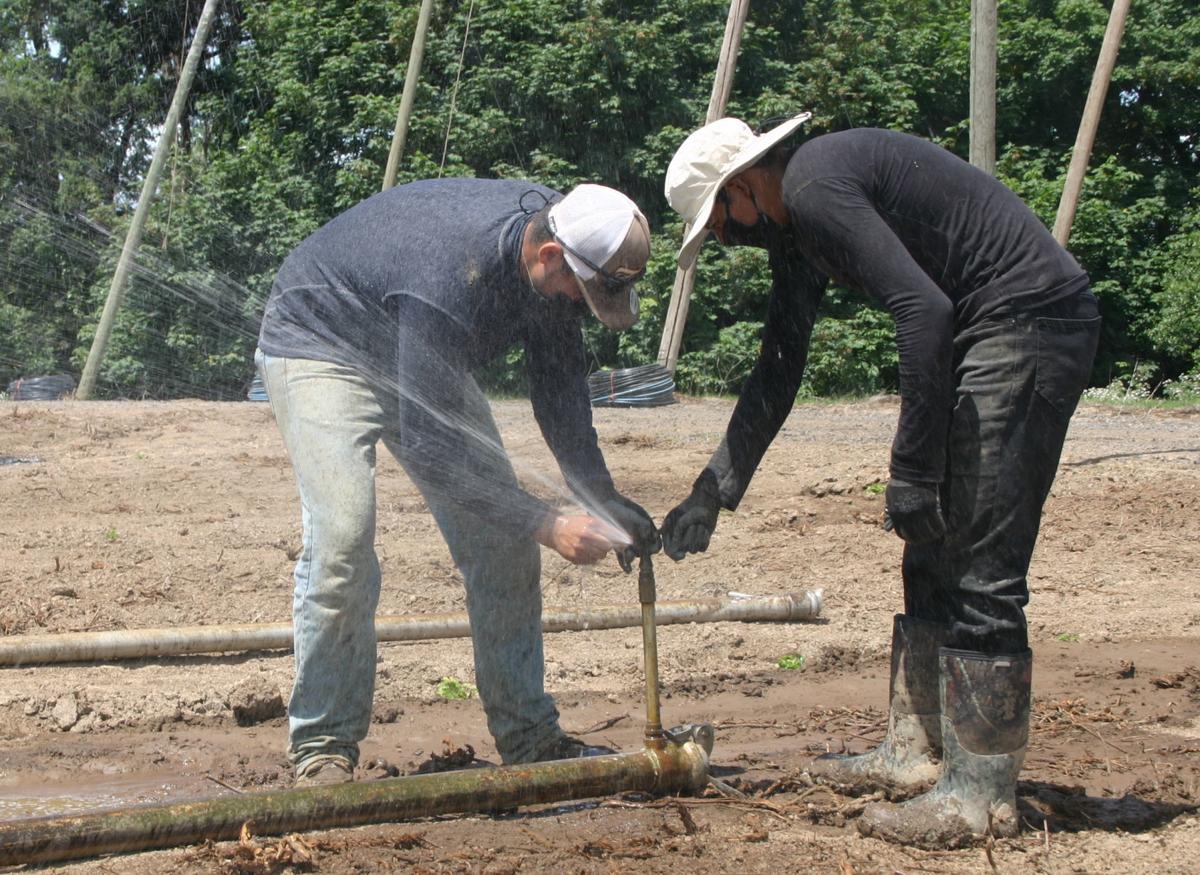 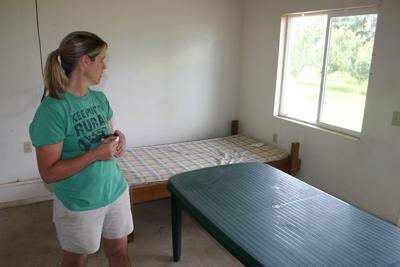 Molly McCargar, a fourth-generation farmer at Pearmine Farms in Gervais, stands inside one of the cabins at the farm's labor camp, which are in the process of being reconfigured to comply with COVID-19 worker protections.

Kyle Birr, with ServiceMaster of Salem, scrubs a refrigerator while deep-cleaning the labor camp at Pearmine Farms ahead of cherry harvest.

The labor camp at Pearmine Farms in Gervais consists of 12 cabins where workers stay during cherry harvest, which usually begins in early June.

Part of the COVID-19 temporary rule issued by Oregon OSHA requires farms to provide one portable toilet and hand-washing station for every 10 workers in the field. The normal standard is one station for every 20 workers.

Dr. Eva Galvez, a physician with the Virginia Garcia Memorial Health Center, signed on in support of a petition requesting COVID-19 protections for migrant and seasonal farmworkers.

GERVAIS — On a sunny morning in early June, Molly McCargar walked between rows of cherry trees at Pearmine Farms, pausing briefly to inspect the fruit for size, color and ripeness.

With harvest beginning in just a few short weeks, McCargar, a fourth-generation family farmer in the Mid-Willamette Valley, would soon welcome 40-70 migrant and seasonal workers to pick this year's crop, all of which will be sold to a local processing company to make sweetened maraschino cherries.

Farming faces a unique challenge in the midst of the COVID-19 pandemic. Agriculture may be an essential industry, yet the crews responsible for making harvest happen are especially vulnerable to spreading the virus, living and working in close contact.

The rule took effect May 11, though enforcement was delayed through June 1 as farms scrambled to comply with the new provisions.

Most of the laborers arrive from California and are paid for each 18-pound bucket of cherries they pick, averaging $20 to $30 per hour.

"It's a skilled crew," McCargar said. "There is an art to doing it, and doing it fast."

However, the adapted COVID-19 rule has effectively reduced on-farm housing, requiring that beds be spaced at least 6 feet apart or separated by impermeable barrier such as heavy plastic or Plexiglass. Unrelated workers also cannot share bunk beds, as they have in the past.

Some crews, McCargar said, will inevitably be displaced, forcing her to make a difficult choice — does she pay for additional housing or hire fewer workers and leave some crops unharvested?

"We're making decisions with the best hope that it will all work out," McCargar said. "It's like anything in farming. We do it, and hope it pays off."

At the same time, McCargar said farmers understand the importance of keeping workers and their families healthy.

"They don't have to come pick cherries for us," she said. "We want to make sure we're being extra cautious with everyone."

Oregon OSHA wrote the temporary rule based on a petition filed in March by the Oregon Law Center and Virginia Garcia Memorial Health Center, two organizations that provide legal services and health care for migrant and seasonal farmworkers.

In addition to rearranging labor camps, farms must provide double the number of portable toilets and hand-washing stations in the field, at least one for every 10 workers. Facilities must also be cleaned three times a day.

If a farm provides transportation to and from work, then both the driver and all passengers must wear cloth face masks and stay 3 feet apart inside vehicles. Frequently touched surfaces like door handles, armrests and steering wheels, need to be wiped down before each trip or twice daily.

Finally, farms are responsible for appointing one or more "social distancing officers" whose job is to guarantee that workers maintain 6 feet of physical distance both at work and back at camp.

Oregon has approximately 160,000 farmworkers and their families across the state, and 339 registered labor camps.

While there is clearly a greater cost for farms to comply with these policies, Wood said they are urgently needed as the pandemic continues to unfold. For example, even as regulators wrote the rule in April, 36 workers at the Stemilt Growers housing facility in East Wenatchee, Wash., tested positive for COVID-19. All were asymptomatic.

"That certainly was a frightening reality to me," Wood said. "There is a basis for some extraordinary action. That said, we tried to be careful that whatever actions we took were reasonable ones that could be implemented."

The rule is expected to remain in place through the summer, though it will expire no later than Oct. 25.

Dr. Eva Galvez, a physician at the Virginia Garcia Memorial Health Center, grew up the daughter of a farmworker in Hood River. She has seen firsthand how migrant workers are at greater risk for contracting COVID-19, which can spread rapidly in close quarters.

Federal guidelines allow labor camps to house up to one bed for every 50 square feet of space where workers sleep, with a 7-foot ceiling.

Not only that, but Galvez said workers often don't have the same safety net as other employees, like vacation or sick leave. If they are undocumented, they might not complain about hazardous working conditions over fear of retaliation.

"This is a very vulnerable population," Galvez said. "If somebody does fall sick or doesn't feel well, staying home is not an option."

Founded in 1975, the Virginia Garcia Memorial Health Center serves 52,000 patients a year at five primary care clinics in Washington and Yamhill counties, emphasizing health care for migrant and seasonal farmworkers and their families.

Galvez, who signed the original petition for strengthening farmworker protections, said the temporary rule is a step in the right direction though it still contains flaws. The petition sought to impose a hard limit of two unrelated workers per cabin, which was not adopted.

Instead, the rule allows farms to put up barriers between beds, which Galvez worries may not help matters in cramped and poorly ventilated cabins.

"For my patients, I know their working and living requirements are critical," she said. "We just have to put ourselves in their shoes."

Times were already tough for farmers in Oregon before the pandemic, and COVID-19 has only exacerbated declining markets and lower commodity prices.

To help growers comply with the rule, Gov. Kate Brown announced the state will provide $30 million in compensation from the Coronavirus Aid, Relief and Economic Security, or CARES, Act. Agriculture supports 720,000 jobs and more than $34 billion in wages statewide, according to the Oregon Department of Agriculture.

McCargar said that funding will be extremely helpful. She has already spent $12,000 to comply with the rule, including a new $5,000 portable toilet trailer; twin mattresses and bed frames to replace full-size bunk beds in cabins, maximizing space; and hoarding any and all cleaning supplies she can find.

She also hired a professional cleaning company from Salem to sanitize the labor camp, scrubbing walls, floors and kitchen appliances.

"We're starting with a clean slate," McCargar said. "Everything is going to be spotless."

That does not include what it will cost to house displaced workers. McCargar has already ruled out motels, since it would cost $30,000 just to put up 20 workers at the Super 8 in Woodburn during harvest. She is considering renting a pair of office trailers, which could possibly house up to 12 workers, costing $1,300 a piece for the month.

"Farmers generally always have a plan A, B and C," McCargar said. "This (rule) has added a level of just a lot more thoughtful planning and coordination."

Coleman Agriculture, which farms more than 7,500 acres of mostly hops in the Willamette Valley, is also having to alter its operations to comply with the rule.

Max Coleman, 24, returned to the farm after graduating from the University of Puget Sound in 2018 with a degree in economics. Since mid-May, he pored over the sanitation and housing rules while figuring out how to translate regulations into compliance at each of Coleman Ag's five properties.

"It's in our best interest to take care of the people who help us to do our job," Coleman said.

So far, the company has spent $20,000 buying three new portable bathroom trailers and additional cleaning supplies. That comes at a time when contracts with brewers for hops is also being reduced amid the pandemic, with a 5-10% reduction in acres.

Coleman Agriculture typically relies more heavily on H-2A guestworkers to pick hops when harvest begins in August. But this year, the company will only be able to house a little more than half its normal number of workers at labor camps in St. Paul and Independence.

David Henze, president of Coleman Agriculture, said it still plans to harvest the full crop, but will lean more on domestic labor. Even that might be hard to find.

"There aren't a lot of people who want to pick hops. It's hard work," Henze said.

Henze said the farm fully supports the OSHA rule, and wants to keep everyone safe. The pandemic, he said, has put everyone in a hard situation.

"We're just hoping that, when things open up, people will be drinking a lot of beer," Henze said with a smile.