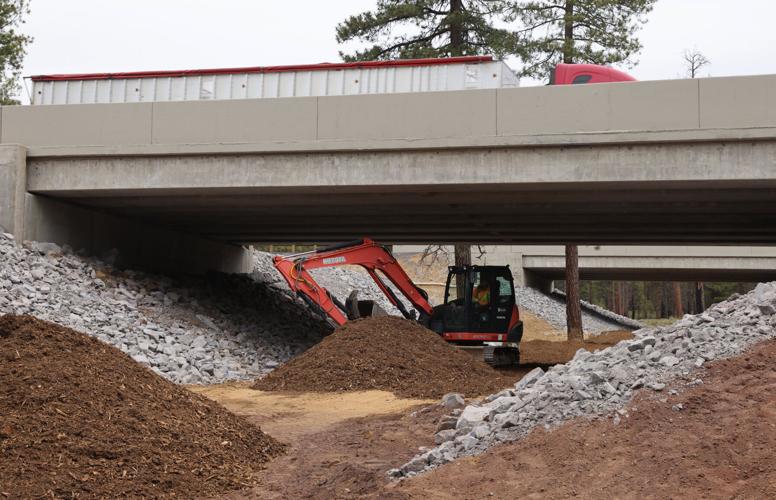 A truck passes overhead as an equipment operator spreads mulch on the ODOT wildlife underpasses below Hwy 97 near Sunriver. 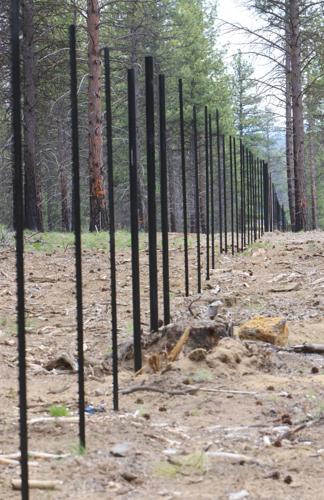 A fence is under construction, designed to guide animals toward the ODOT wildlife underpasses on Hwy 97 near Sunriver. 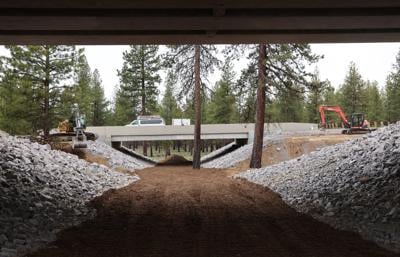 A growing number of spots along Oregon highways now have built-in wildlife crossing structures — paths under or over highways that allow animals to cross without risking a deadly vehicle collision.

Oregon already has five of the structures on public land with another nearing completion, but their prevalence in the state is likely to increase with funding from the state and federal legislators. Advocates say the state is making strides to catch up with other western states where the structures are more prevalent.

The installation of crossings aims to reduce the number of collisions between vehicles and animals — there were more than 6,500 in Oregon in 2020 according to Oregon Department of Transportation data.

But crossings can also help a species’ population by improving the connectivity of their habitats, according to Tyler Dungannon, conservation coordinator with the Oregon Hunters Association.

“They need to move seasonally, and highways are barriers that restrict these essential movements. The issue goes far beyond wildlife mortality on our roadways,” Dungannon said. “Highways are likely limiting wildlife population growth by inhibiting wildlife migration.”

Dungannon pointed to the mule deer as an example of a species that benefits from designated crossings. Mule deer seasonally migrate between low- and high-elevation areas, and are the species most often hit by cars on Oregon highways.

“Inhibiting the essential movements for animals to carry out their life history, to breed, to summer and to winter,” Dungannon said. “Resources are used differently at different times of year and are spread out across the state.”

The $7 million allocated by the legislature earlier this year will be used for a handful of projects across the state, including one along Interstate 5 in Southern Oregon and another on Highway 20 supported by the Burns Paiute Tribe, according to Cidney Bowman, ODOT’s wildlife passage program leader. Funds from last year’s federal infrastructure package could also be available next year.

Other projects funded in part by the legislature’s allocation will include fencing to guide animals toward pre-existing crossings near Dayville and Klamath Falls and a planning study between Bend and Sisters. Studies of which animals travel across which highways are key to being ready for future opportunities for passage projects, Bowman said.

“That's part of the problem with these projects: Wildlife passage is expensive, so we need time to get money and to know what (projects) to do,” Bowman said. “So we can identify those early on so that when ODOT does a turning lane project or highway widening, they know ahead of time.”

Despite the expense, Bowman says research shows they pay for themselves after 12 to 15 years by reducing the societal expenses of wildlife-vehicle crashes, such as insurance increases, car repair and hospital bills.

The increasing prevalence of crossing structures in the state is due in part to increased awareness about the need for them, according to Bowman and Dungannon. Many of the projects planned or underway in the state are only possible with funding and advocacy from a broad variety of individuals and interest groups.

“I work on this every day so I know it's important, but getting these other groups aware and interested — because they're really a large part of what’s gotten us the money and the projects built to date,” Bowman said. “So, I feel like we’re kind of at that tipping point, hopefully.”

Zack Demars is a reporter for The Bulletin.