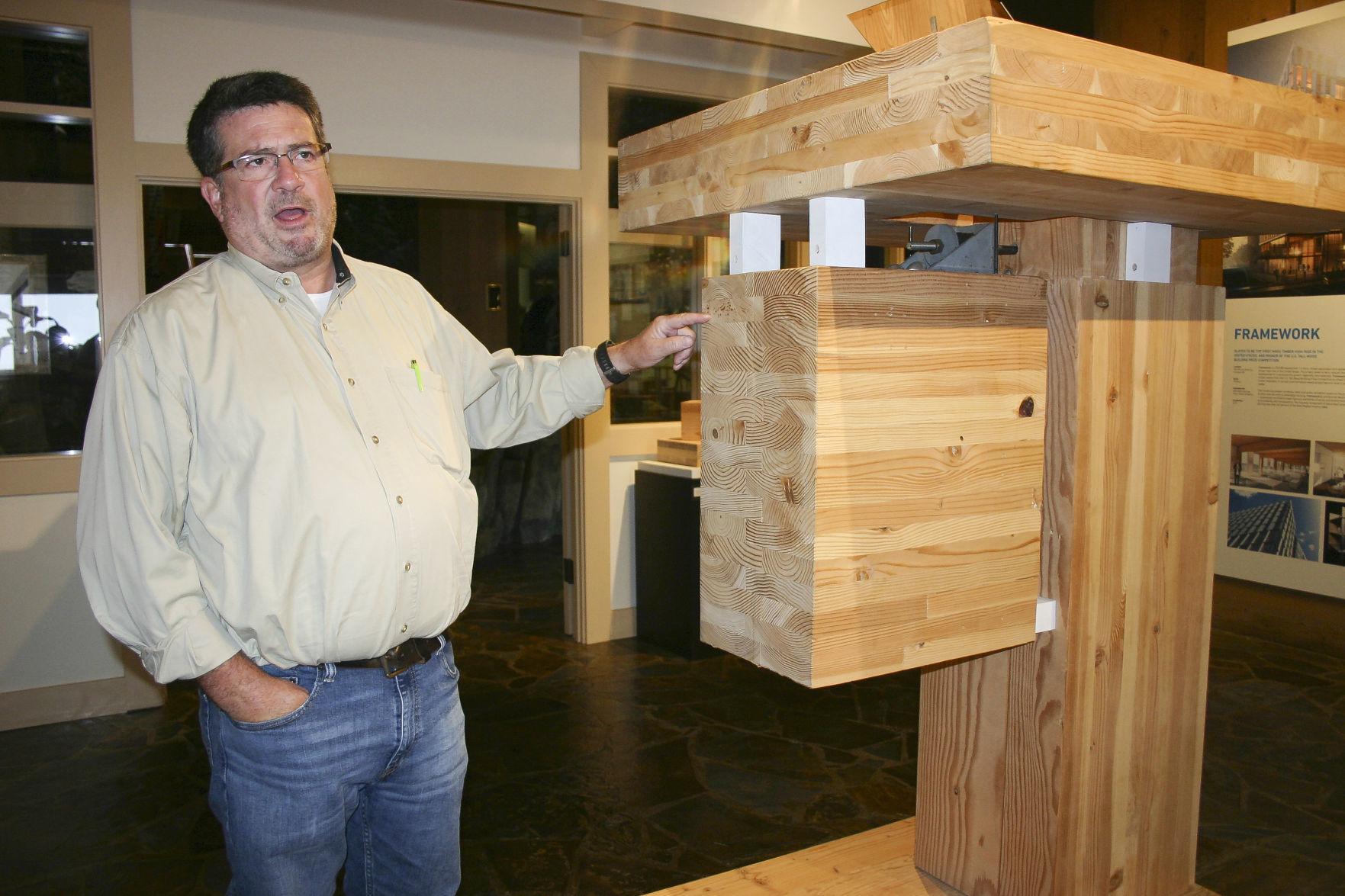 Timm Locke, director of forest products for the Oregon Forest Resources Institute, explains the benefits of mass timber while touring a display at the World Forestry Center in Portland. 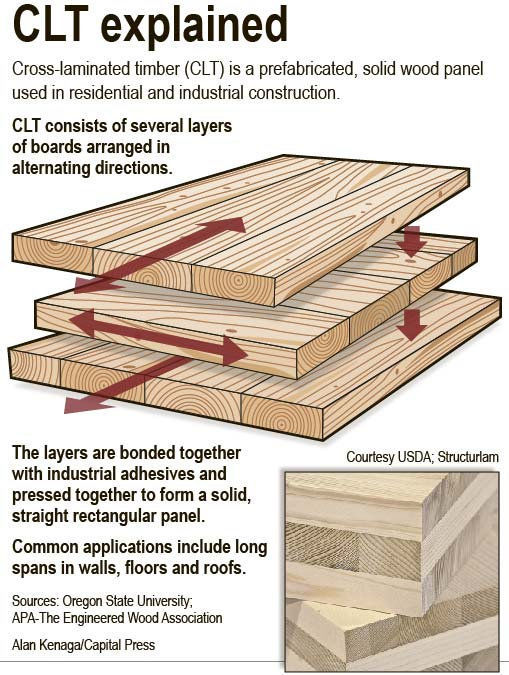 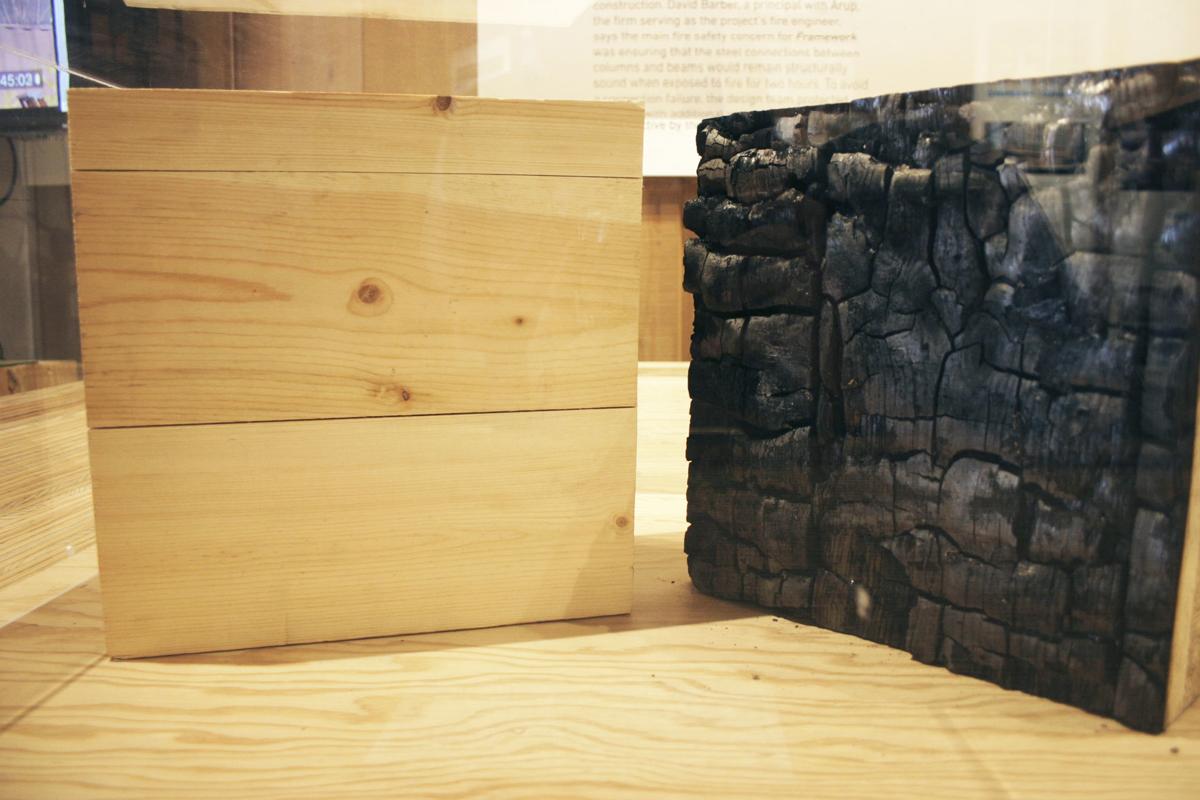 Blocks of mass timber on display at the World Forestry Center in Portland show the before and after of a char test. The thickness of mass timber is designed to insulate panels, giving occupants time to escape in case of fire. 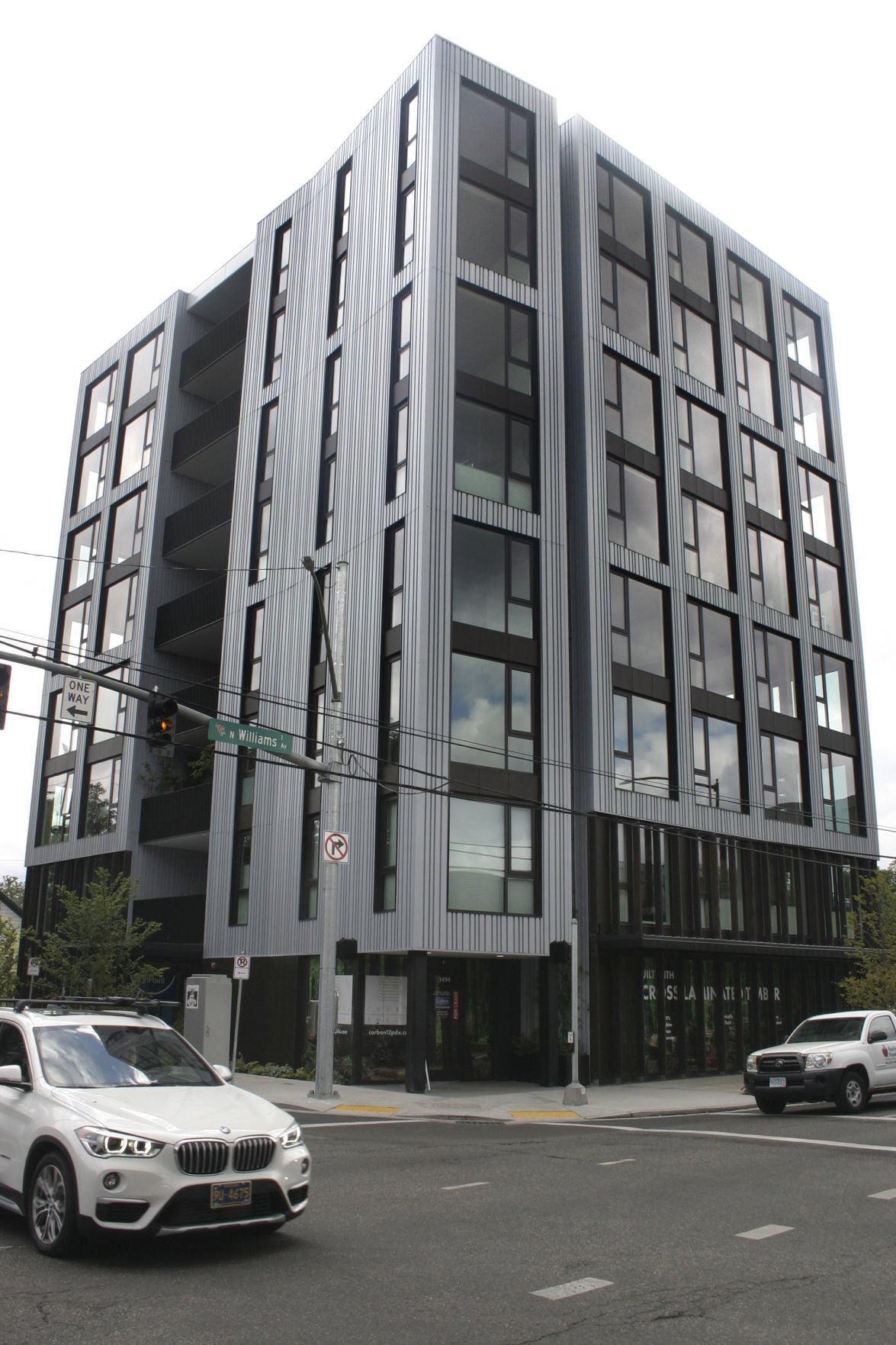 Carbon 12, an eight-story condominium in Portland, is made with mass timber that accounts for 223 metric tons of avoided carbon dioxide emissions, while also storing 577 metric tons of CO2 in the wood itself. That’s equivalent to taking 169 cars off the road for one year. 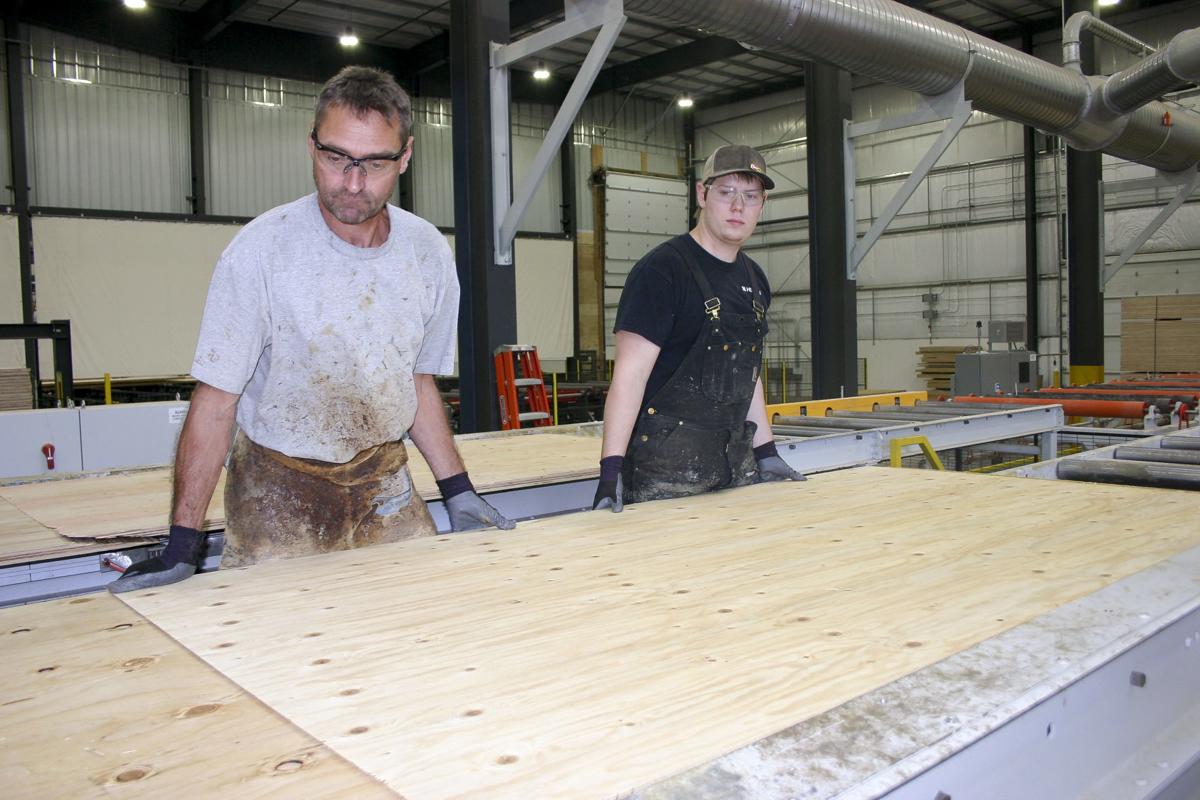 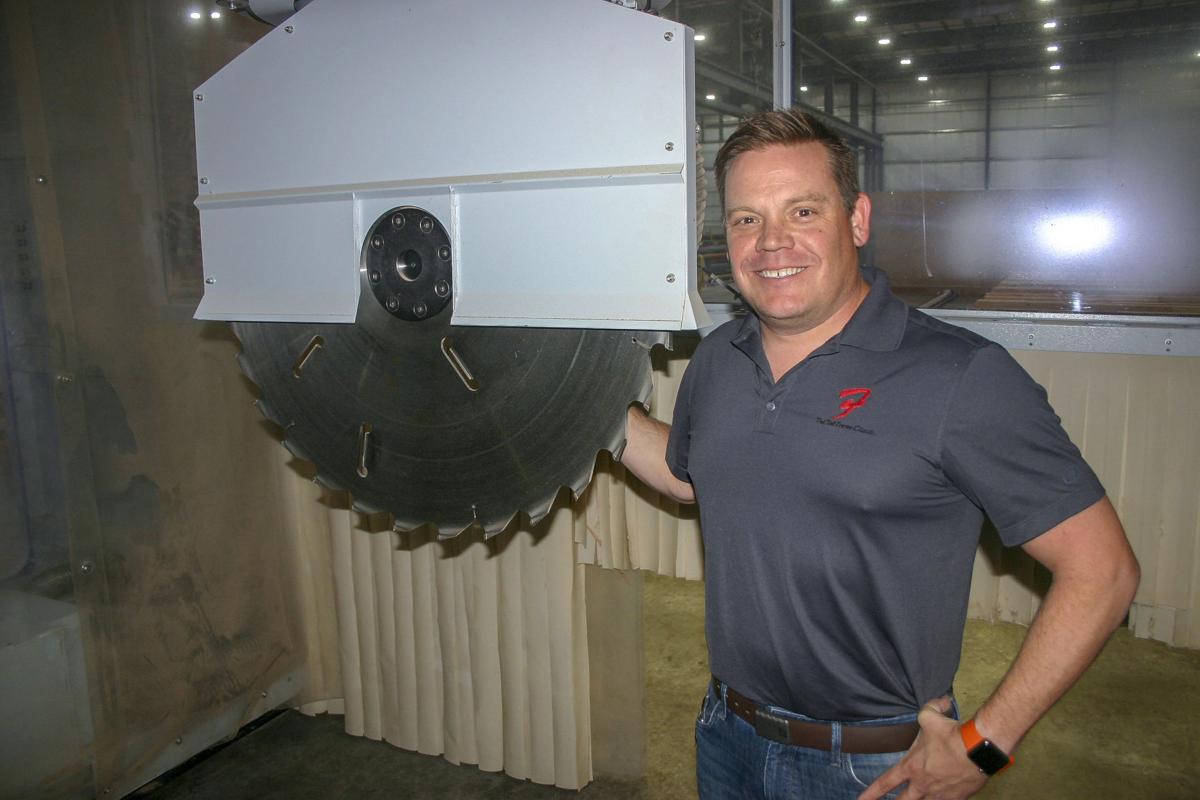 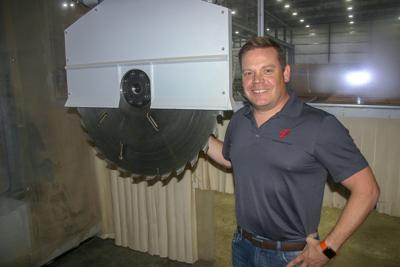 Timm Locke, director of forest products for the Oregon Forest Resources Institute, explains the benefits of mass timber while touring a display at the World Forestry Center in Portland.

Blocks of mass timber on display at the World Forestry Center in Portland show the before and after of a char test. The thickness of mass timber is designed to insulate panels, giving occupants time to escape in case of fire.

Carbon 12, an eight-story condominium in Portland, is made with mass timber that accounts for 223 metric tons of avoided carbon dioxide emissions, while also storing 577 metric tons of CO2 in the wood itself. That’s equivalent to taking 169 cars off the road for one year.

After nearly 100 years in business in the Mid-Willamette Valley, Freres Lumber Co. was at a crossroads.

Forced to compete against a glut of cheap imported plywood from places such as China and South America, the family-owned business, which specializes in manufacturing a variety of wood products, needed something innovative to keep up in the marketplace.

"Our plywood markets have continually been eroded by so many imports," said Tyler Freres, vice president of sales for the company. "Raw materials in Oregon are not cheap."

Development began in 2015 on "mass plywood," a value-added product made from sheets of veneer lumber laminated into sturdy panels up to 12 feet wide, 48 feet long and 12 inches thick. Mass plywood is just one example of mass timber, a type of building material pioneered in Europe and used in the construction of tall commercial buildings.

Other forms of mass timber include cross-laminated timber panels, which consist of several layers of lumber boards stacked in alternating directions; dowel laminated timber, fit together with hardwood dowels instead of glue or nails; or glue laminated beams, bounded with moisture-resistant adhesives.

Freres said they were initially dubious of mass timber, primarily because it uses so much wood. The beauty of mass plywood, he said, is more veneer actually makes it into the finished product, minimizing waste while maximizing profit.

"You need to have as much (wood) go into the finished product as possible," Freres said. "We just really felt like we could do it better."

Freres Lumber recently received a patent for mass plywood in Canada, to go with patents in the U.S., Australia and New Zealand. The company opened a four-acre, $36 million production facility near Lyons in December 2017, adding about 10 employees with the potential for even more jobs as production ramps up to full scale.

Mass timber has the potential to revitalize the economy in rural Oregon, Tyler Freres said, but only if state and federal lawmakers are willing to make changes in how forests are managed, and provide adequate harvest for the products to become cost-effective.

"If we can harvest a higher portion of what we grow every year, our state will become more prosperous, and so will our rural communities," he said.

The first buildings made with cross-laminated timber, or CLT, were constructed in 1993-95 in Germany and Switzerland, and most production today remains in Europe.

D.R. Johnson, a lumber manufacturer located south of Roseburg, became the first U.S. company certified by APA — The Engineered Wood Association to make structural CLT panels in 2015. A total of six companies are now certified by the association in the U.S. and Canada, including Freres Lumber.

One major selling point of building with wood, apart from appearance and aesthetics, is environmental sustainability over steel and concrete.

"From the start, we need to realize that using wood for construction or building is good," Freres said. "It's just a fantastic material."

All told, wood production emits 26 percent less greenhouse gases than steel, and 50 percent less than concrete. Wood also sequesters carbon through the lifetime of the building, with every cubic meter storing up to 1 ton of carbon dioxide.

A study by Grand View Research in San Francisco predicts the global CLT market will be worth more than $2 billion by 2025, tied to increasing demand for environmentally friendly housing.

To capitalize on the potential, Congress included the Timber Innovation Act in the 2018 Farm Bill, creating a research fund for mass timber under the USDA. Oregon Sens. Ron Wyden and Jeff Merkley were  vocal supporters of the proposal, which received $3.5 million in the federal spending package approved Feb. 14.

"We have been working to establish Oregon as a hub for mass timber products, using local timber and bolstering our forest products economy," Merkley said in a statement released last December.

More wood buildings are starting to emerge in Portland, including Carbon12, an eight-story condominium tower built in 2017 on the corner of North Williams Avenue and Northeast Fremont Street.

In a previous interview with the Capital Press, William Silva, pre-construction manager for Swinerton Builders in Portland, said mass timber is becoming more than just a progressive concept.

"I see a lot of developers looking at this as a value proposition," Silva said, referring to the way mass timber elements are prefabricated to specification, allowing for faster, cheaper construction on site.

The boom time for tall wood buildings could just be getting started in Oregon, after the state Building Codes Division approved what is known as a Statewide Alternate Method that allows for wood structures up to 18 stories tall.

The rules are based on the findings of the International Code Council, which formed a committee in 2015 to explore the scientific and technical merits of tall wood buildings. The committee proposed 14 changes to the International Building Code, which were approved in December 2018 and will be adopted in 2021.

"They went through many iterations of fire testing," Rocco said of the ICC committee's research. "There is quite a bit of scientific experimentation run on the actual timber proposals."

The Statewide Alternative Method "intentionally reinforces the notion that state building code is not a barrier to any method, technique or material of construction that is supported by scientific findings."

With changes coming to the International Building Code, Tyler Freres said the company has 60 active quotes for new buildings ranging from two to 20 stories tall.

"Now wood can go into nearly 90 percent of all developments out there, except the tallest skyscrapers," he said.

The challenge moving forward, Freres said, is increasing production to lower costs. That ties back to timber harvest in Oregon's forests, which has declined by more than half since 1980.

Meanwhile, Oregon forests are growing 2.8 billion cubic feet of new wood every year, of which 39 percent is logged and 25 percent dies from fire, insects and disease, according to OFRI. The remaining volume also adds to the fuel density driving larger and more severe wildfires, Freres said.

"Oregon and the federal government do not do enough to make our forests safe and healthy," he said.

Mass timber could have a profound impact on communities spanning the urban-rural divide, Freres added, but only if government changes its tune on forest management.

"If we don't take the fiber out of the forest, Mother Nature definitely will," he said.

Brad Kahn, a spokesman for the Forest Stewardship Council, agreed there is opportunity for mass timber, but said it should not be purely about increasing logging.

"It is about incentivizing a type of forestry that makes sense in an era of climate change," Kahn said. "If the market just delivers wood as a commodity in big volumes, then yeah, there is a concern that mass timber could become just another driver for large clear-cuts, lots of chemicals and impacts on the landscape."

The Forest Stewardship Council is an international nonprofit organization that certifies timber producers if they follow a set of standards intended to protect the environment. The idea, Kahn said, is to use market forces to reward management practices that go above and beyond state law.

Based in Seattle, Kahn said the practices differ between regions to mirror natural processes. Along the Pacific Coast, that means limiting average harvest size to no more than 40 acres, and leaving riparian buffers of 50 to 150 feet, depending on the presence of fish.

Kahn acknowledges it does cost companies more to manage forests to FSC standards, but he said the goal should be to improve sustainability while avoiding forest degradation.

"When wood comes from a responsibly managed forest, it is arguably the the most sustainable building product we have," Kahn said. "If we have high standards in place, and significantly above what is allowed under the law, then yes, mass timber can be a good solution."