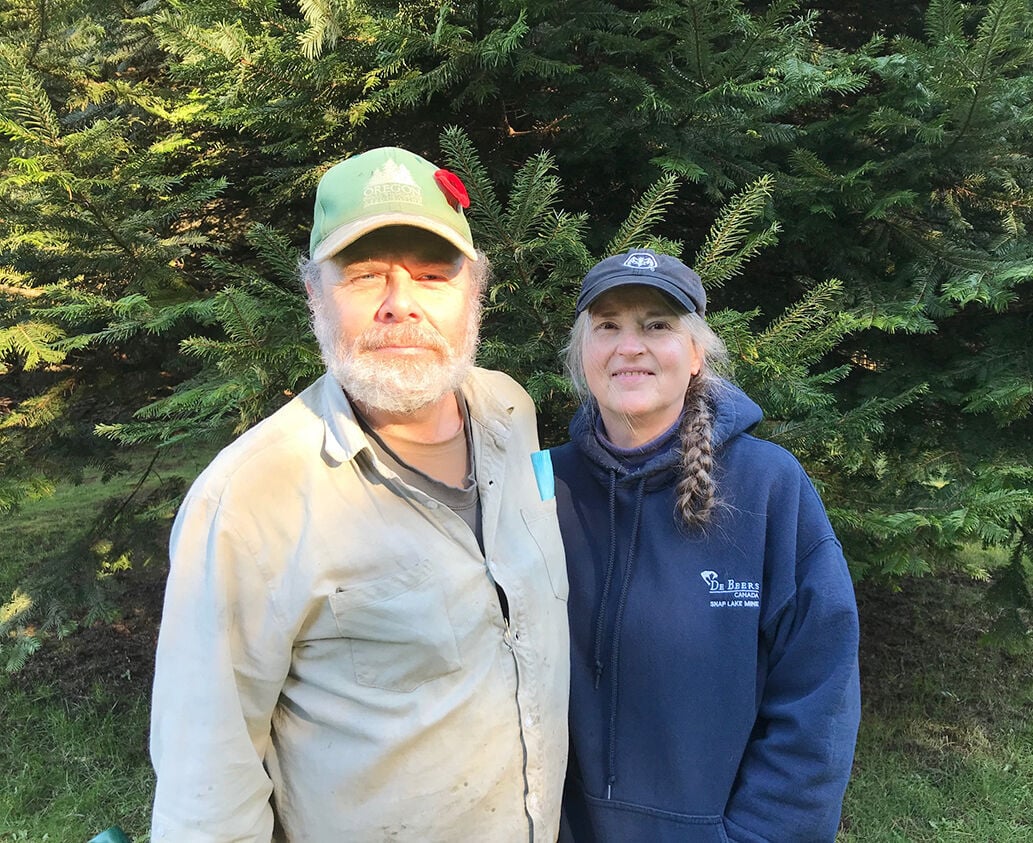 Lee Peterman, left, and Shirley Jolliff purchased Bogwood in 2013. It is near Scio, Ore. 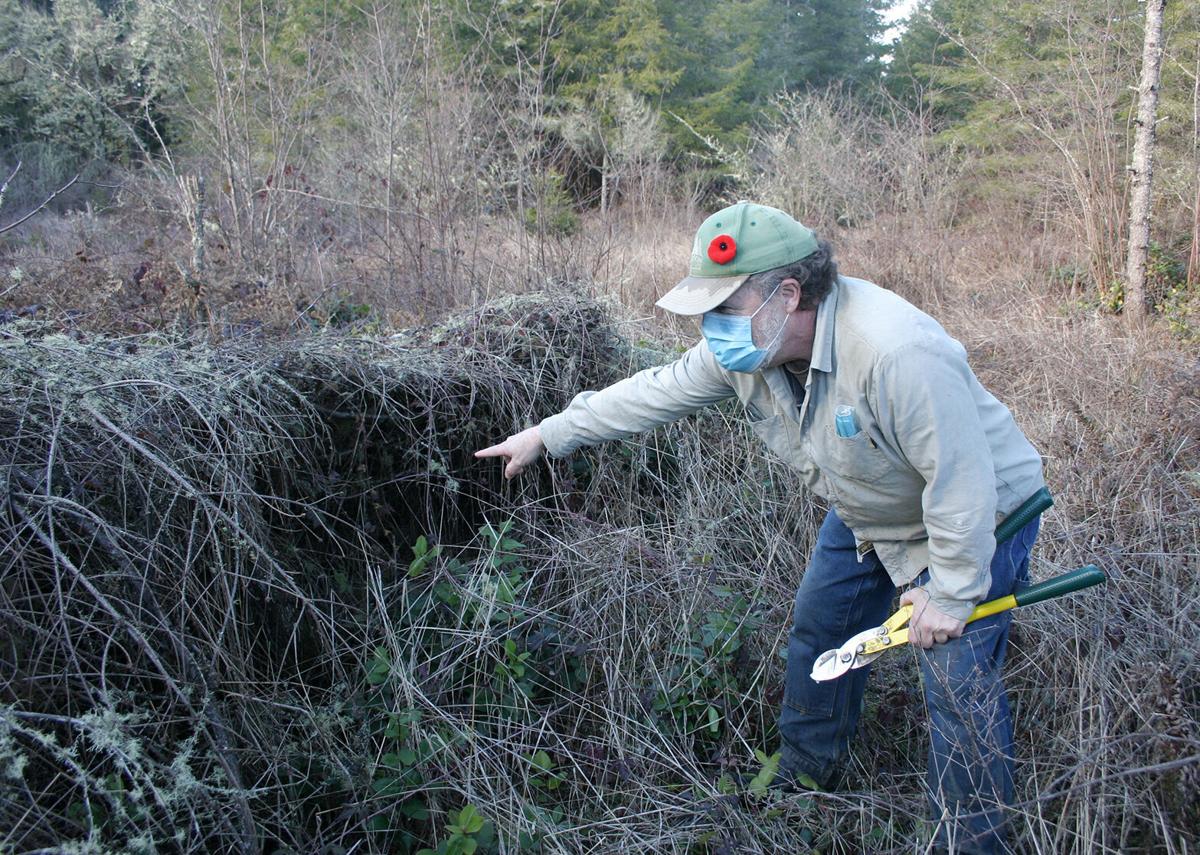 Lee Peterman inspects a “bio-den,” made from tree branches and limbs to provide additional habitat for birds and deer. 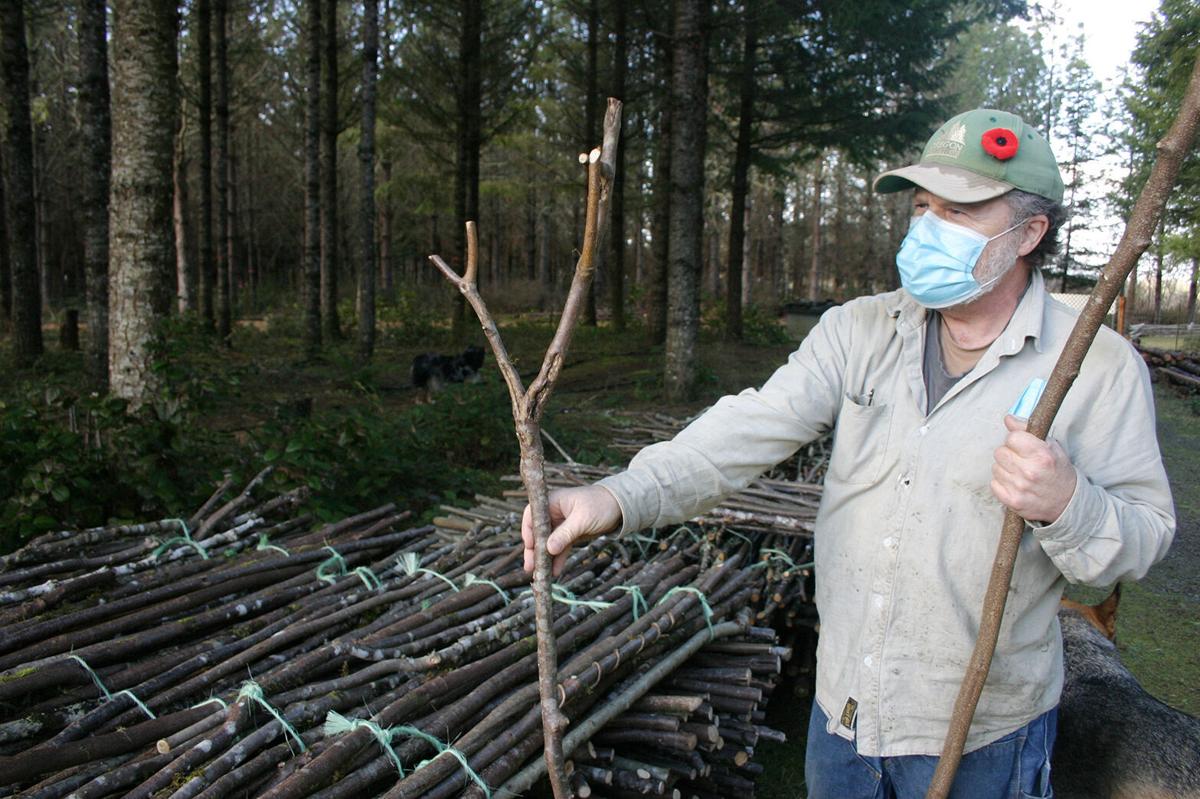 Lee Peterman shows bundles of hardwood sticks that will be sold to an artisan in Eugene, Ore., who makes 19th-century style brooms. 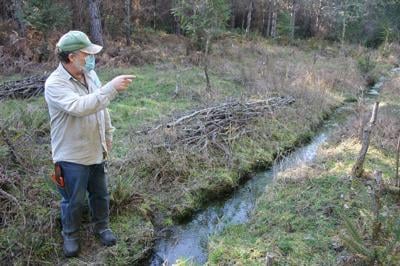 SCIO — The idea seemed at first ludicrous to Shirley Jolliff and Lee Peterman.

As a couple of self-described "tree hugging dirt worshippers," Jolliff and Peterman were loathe to cut down any trees on their small woodland property near Scio, Ore., which they have affectionately named "Bogwood."

But, in order to enhance and restore Bogwood's namesake wet prairie, Peterman said they had no choice except to remove all invasive species like English hawthorn, Himalayan blackberry and Scotch broom.

Then they would need to thin the overstocked groves of hardwoods and conifers, allowing native plants to thrive while opening habitat for a rich diversity of wildlife including owls, hawks, bald eagles, coyotes, deer and possibly even a prowling bobcat.

"Our goal, we call it the five B's: birds, bats, bees, butterflies and Bambi," Peterman said. "There is so little native habitat for critters ... We can't save the world, but we can do a little bit in this little part, and do what we can."

Jolliff and Peterman got help from the USDA Natural Resources Conservation Service, which paid for them to do the restoration work — largely by hand — through the agency's Environmental Quality Incentives Program, or EQIP.

The project began in June 2017, and finished last fall. The couple was recently named 2020 Linn County Tree Farmers of the Year by the Oregon Tree Farm System, which is administered by the Oregon Small Woodlands Association.

Coming to Oregon from the San Francisco Bay Area and Monterey, Calif., Jolliff and Peterman were eager to embrace a more rural lifestyle.

In 2013, they purchased 80 acres in the Mid-Willamette Valley, about 25 miles south of Salem, and immediately fell in love with the lush green landscape.

It was Jolliff who came up with the name Bogwood. The property is a perfect rectangle, roughly a quarter-mile wide and half-mile deep, that gradually climbs 100 feet to a tree-lined ridge surrounding the mostly flat center.

That ridge essentially funnels moisture from heavy rains into the "bog," where it sits until slowly drains into the local watershed.

"It's basically like a bowl," Peterman said. "It's not a bog in the traditional sense. It's just an area that's damp most of the year."

Before they arrived, however, the property had been extensively logged, altering its natural character. Peterman said they knew they wanted to restore the ecosystem, but admitted they had no idea where to start.

They joined the Oregon Small Woodlands Association in 2014, which Peterman said unlocked a wealth of information. "It was like opening a book for the first time," he said.

The association encouraged Jolliff and Peterman to contact NRCS, which proposed the 22-acre wet prairie restoration. Initially, Peterman said they looked at creating a white oak savannah, but that didn't seem to make as much sense.

With funding from EQIP, Peterman took on the task of thinning trees and removing invasive species, while Jolliff followed behind replanting native trees and shrubs like red elderberry, red osier dogwood, Douglas spirea and mock orange.

The couple also built a series of beaver dam analogs along a seasonal creek to hold back water, allowing it to remain on the property a little longer for the benefit of plants and animals.

"There is so little (wet prairie habitat) left," Peterman said. "Up and down the valley, it's just been wiped out."

Traipsing through a grove of Douglas fir and Willamette Valley ponderosa pine near the property's farmhouse, Peterman identified the smaller and scrawnier trees that have suffered due to overcrowding, which he plans to remove as part of a second round of EQIP funding — this time for promoting wildfire resiliency.

"They're really just taking up resources that the other trees need," Peterman said. "Even though logging is not our goal, neither is letting the resources be sucked up by trees that are never going to be fat and happy."

Jolliff and Peterman landed the second EQIP award in the summer of 2018. Part of the work involves cutting smaller trees and branches 10-11 feet off the ground, preventing wildfires from climbing into the tree canopy where they can swell into massive, fast-moving infernos.

While Peterman initially grimaced at cutting down trees, he said they try to replace and replenish as much wood as they can back into the forest.

The couple have reused branches and limbs to build the beaver dam analogs, as well as bio-dens scattered around the property, offering refuge to birds and deer. EQIP grants also paid for essential equipment, like a 5-horsepower electric sawmill and electric chainsaw, which Peterman has used to fashion wooden fencing and bird boxes.

For several years, Jolliff and Peterman have also provided sturdy hardwood branches to an artisan in Eugene who makes 19th-century style brooms. The broomsticks are especially popular with people who play Quidditch, a fictional-turned-real sport from the Harry Potter universe.

"We have our sticks from Bogwood all over the world," Peterman said.

While the EQIP project for fire resiliency will expire this year, Peterman said their work as tree farmers is never truly finished. There will always be more trees that need to be thinned, and more areas that need to be replanted.

"I have worked almost all my life in various physical jobs," Peterman said. "I have never in my life worked harder physically, but I can literally and honestly tell you I've never been happier at anything I've ever started and done."

George Plaven is a reporter for the Capital Press.