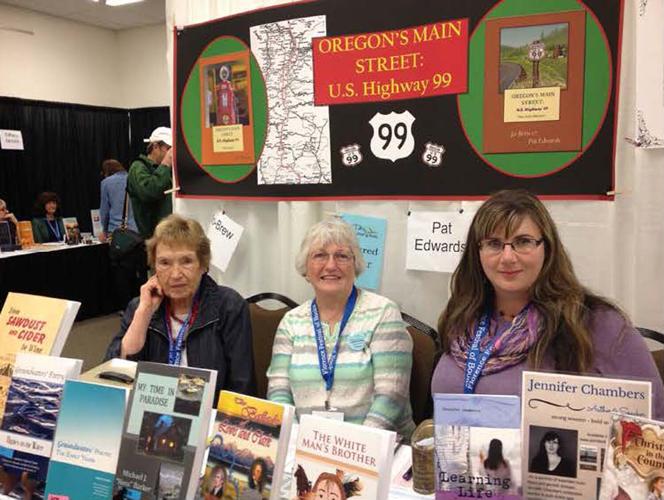 Pat Edwards (center) sits with authors Jo-Brew (left) and Jennifer Chambers (right) at the Florence Festival of Books in 2017. Edwards has contributed to the books, ”Oregon's Main Street: U.S. Highway 99," "The Stories" and "The Folk History." 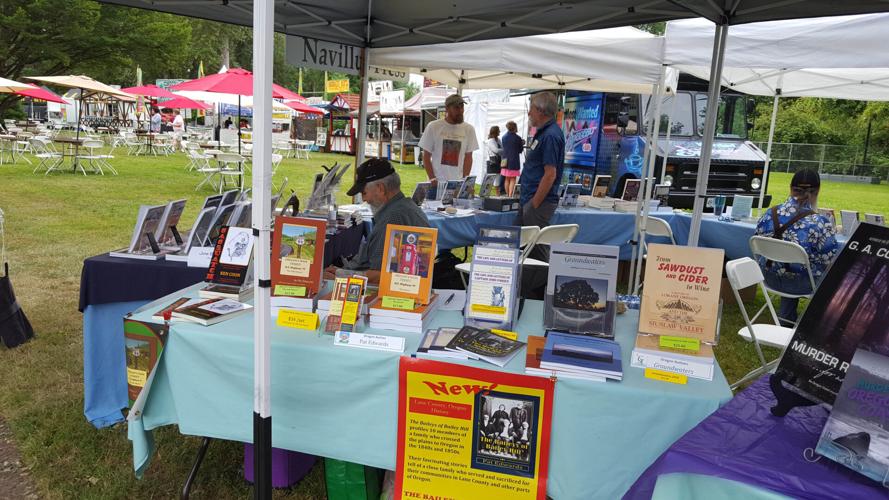 Pat Edward’s books “Sawdust and Cider: A History of Lorane, Oregon and the Siuslaw Valley” and “From Sawdust and Cider to Wine”at Art in the Vineyard in 2019. Her most recent book is, “Picking the Orchard Clean.”

Nestled between Eugene and Cottage Grove lies the unincorporated rural community of Lorane, home to author and historian Pat Edwards.

Although Edwards isn’t from Lorane originally, she spent her childhood visiting her grandparents’ ranch, and eventually bought a historic farmhouse there with her husband, Jim in 1966. They became staples of the community and even purchased the renamed Lorane Family Store.

Edward’s interest in the region’s history started in 1987 with the Lorane Centennial Celebration. For three years she researched the economic history with the help of two friends, Nancy O’Hearn and Marna Hing, which she then compiled into her first book.

“It was a wonderful, heady experience for three middle-aged ladies who had never had any idea that we would be able to accomplish what we did,” Edwards said.

The concept for “Picking the Orchard Clean” originally started as a brief history about the “Bohrnstedt Boom,” when A.C. Bohrnstedt bought land in Creswell and Lorane for orchards, broke them into parcels, and sold them to investors in the Midwest and the Eastern U.S.

Many in the area viewed Bohrnstedt as a con-man, but Edwards wanted to uncover the truth in her research.

“Once I began researching it, I began finding a lot of material, not only on A.C., but on the Orchard movement in Oregon at the time,” Edwards said. “It really piqued my interest, so I began delving deeper.”

Edwards used the resource newspapers.com for information about Bohrnstedt and the start of the Oregon orchard industry. She also used ancestry websites to connect with family members, as well as obtain photos and documentation on residences, businesses and census information.

For her other books, she also spent time at the Lane County Historical Museum, the Applegate Pioneer Museum and the Cottage Grove Genealogical Society.

“I love the research process,” she said, adding that she enjoys putting together a timeline as she obtains information. “For me, the research I have done and the work I have put into the history of our community has become my legacy — something that I can leave behind me for future generations.”

The most rewarding aspect for Edwards has been earning the title with her co-researchers as “Unofficial Lorane Historians” by community members.

Although she doesn’t have a specific project she wants to work on next, Edwards said that she hopes by recording and sharing these stories, she can help keep the past alive.

“Part of it can be appreciated and longed for once again and other parts can serve as a way of seeing how mistakes were made in the past,” she said. “So they can be avoided in the future.”

Aliya Hall is a freelance writer from Portland.