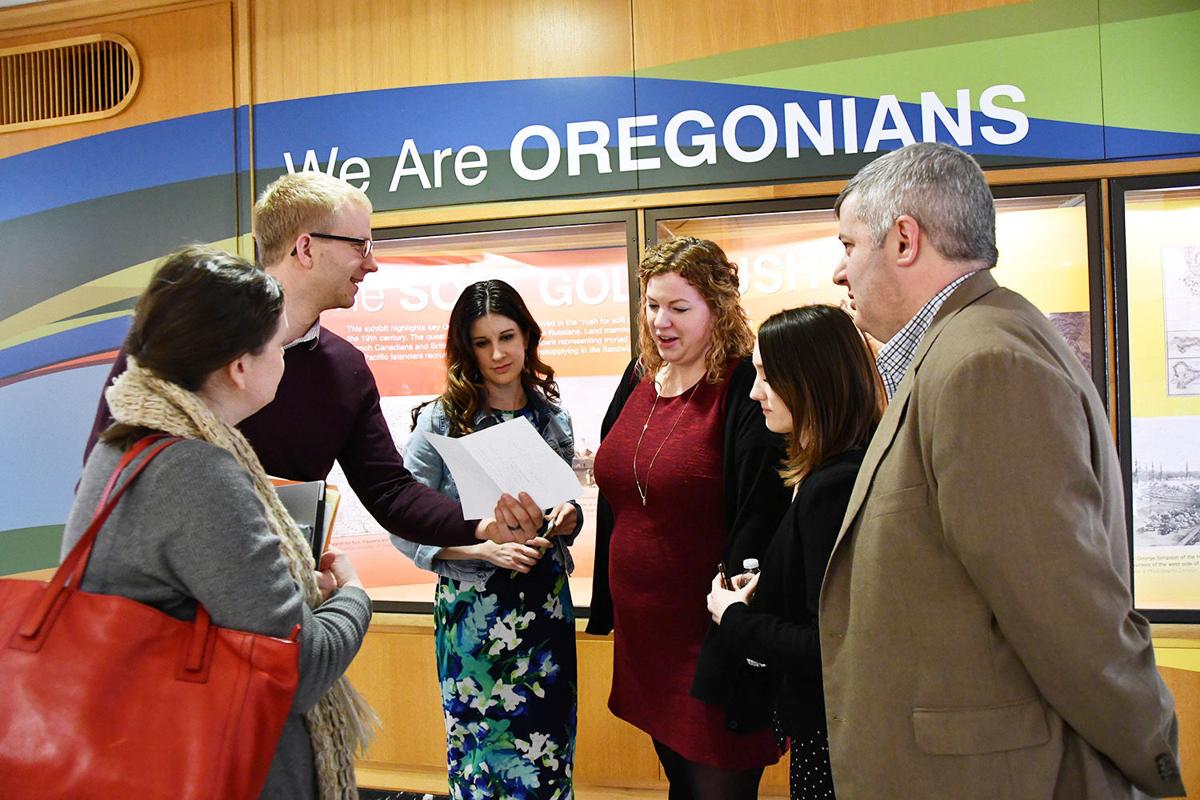 Mary Anne Cooper, in red, talking with other lobbyists, some representing urban interests. 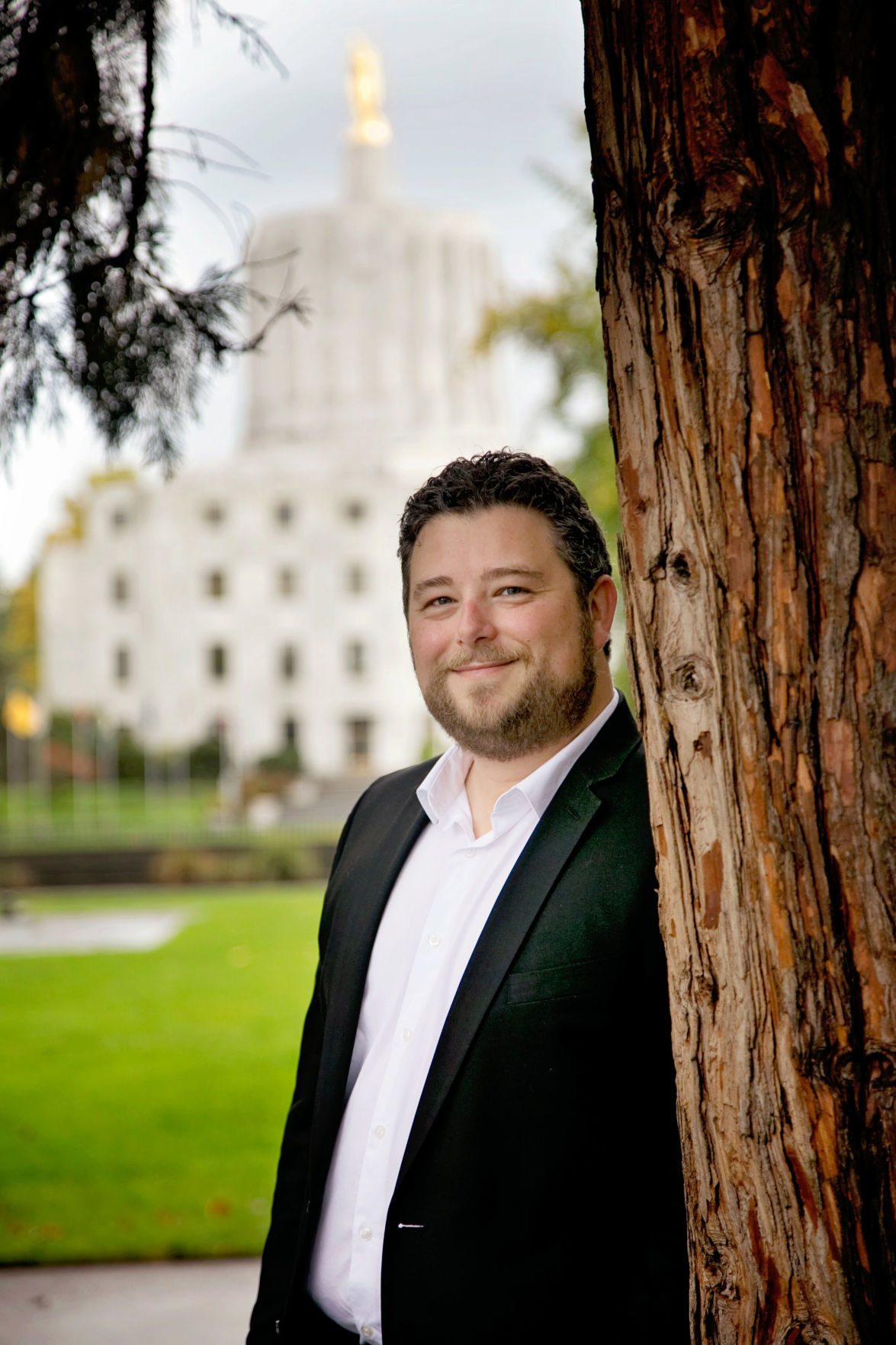 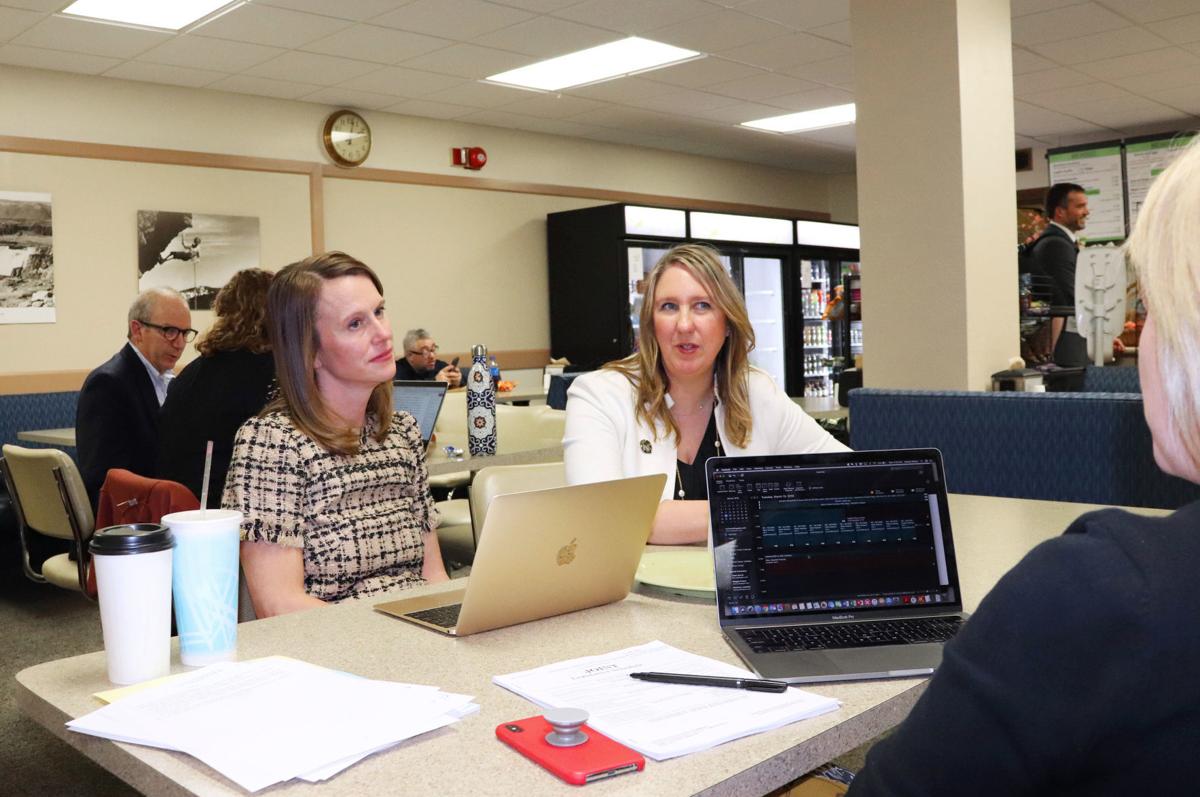 Executive director of Oregonians for Food and Shelter Katie Fast, center, Katie Fast, consults with colleagues at the statehouse. 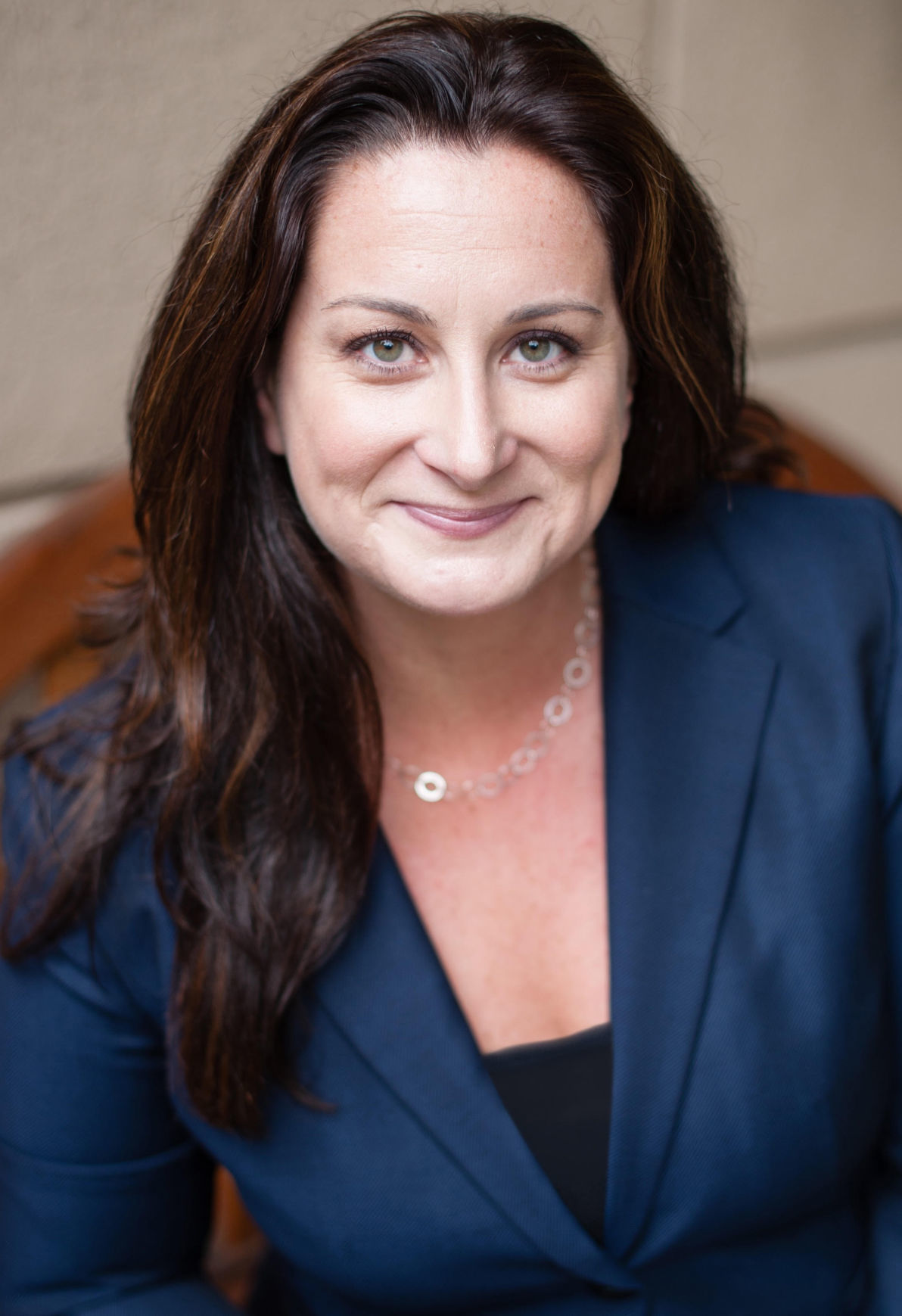 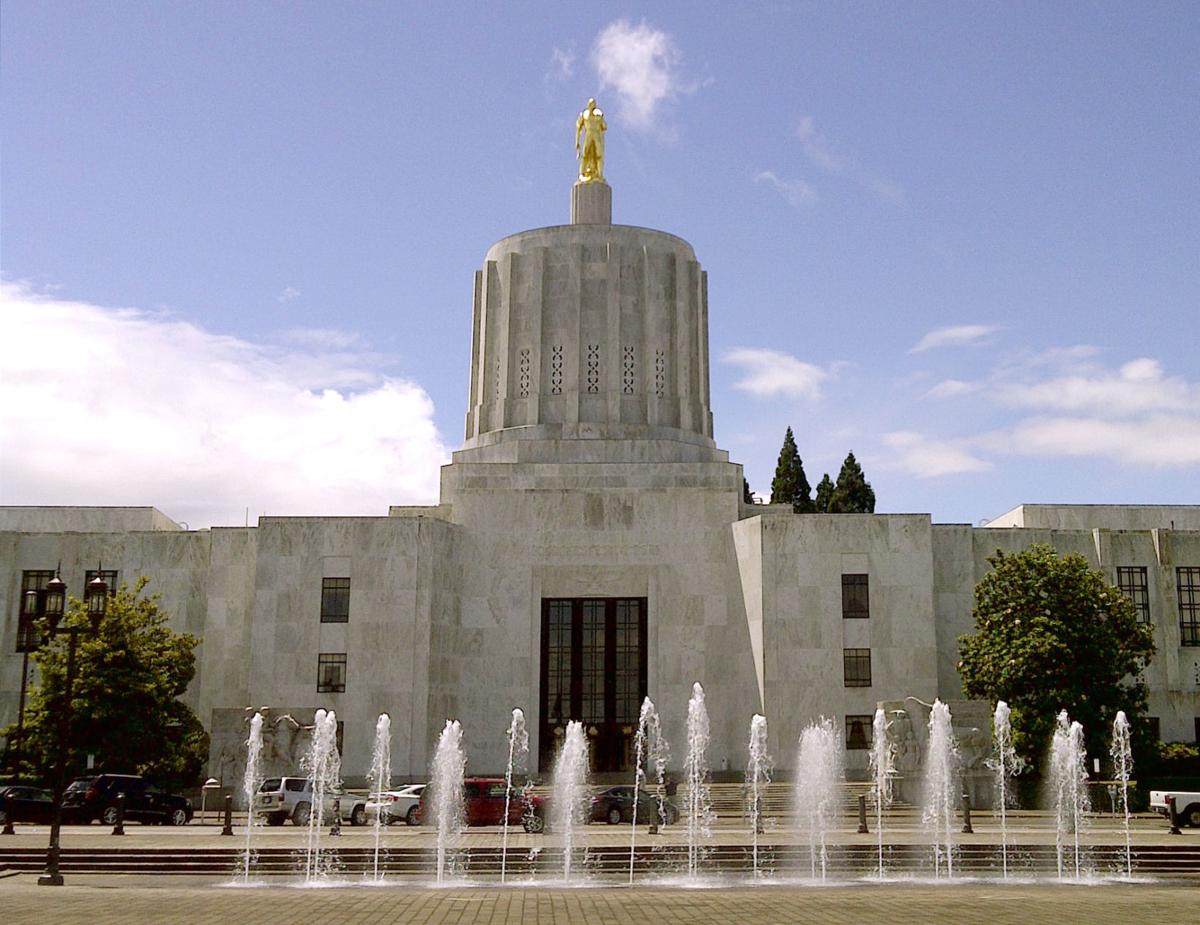 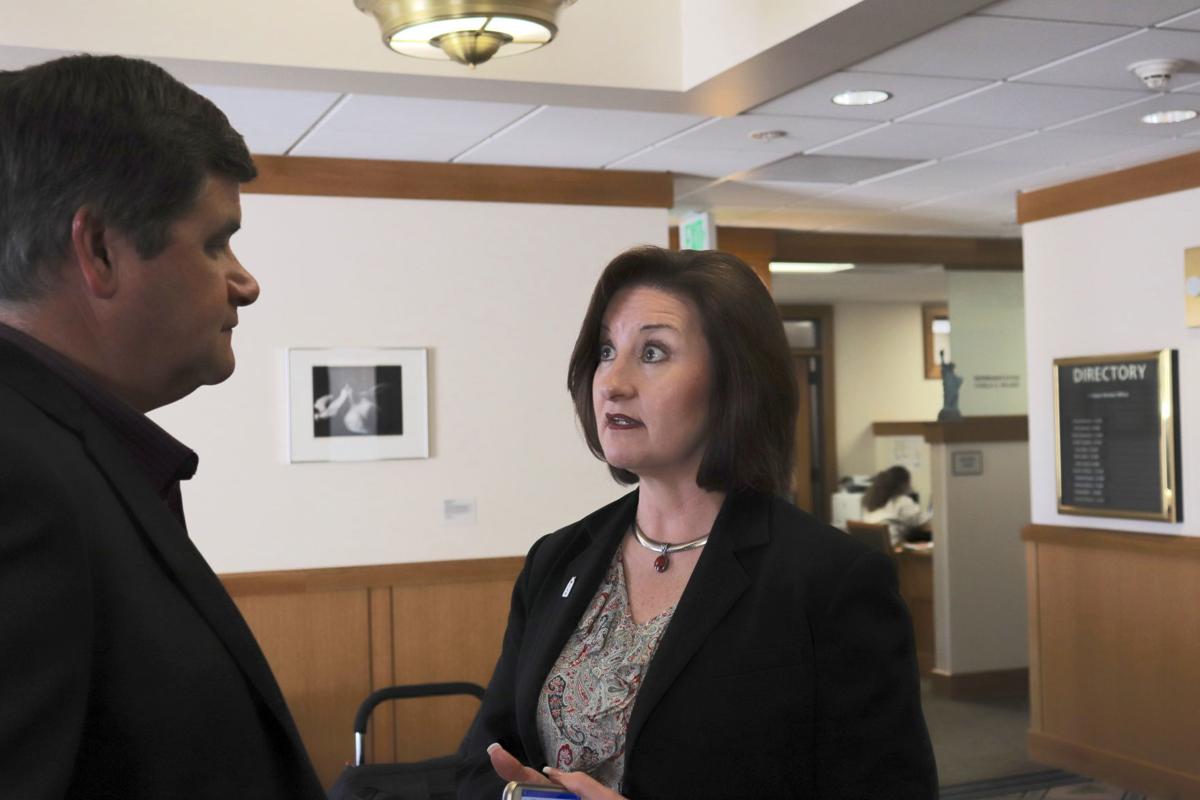 Mary Anne Cooper, in red, talking with other lobbyists, some representing urban interests.

Executive director of Oregonians for Food and Shelter Katie Fast, center, Katie Fast, consults with colleagues at the statehouse.

Few Oregonians would ever accept a job without knowing the salary. Agricultural producers do that every season.

They invest in crops, animals and equipment, and sometimes take out mortgages, without knowing what they’ll get paid when their products go to market – or even whether they’ll make money or lose money.

“It is a different way than most of society operates,” said Katie Fast, executive of director of Oregonians for Food and Shelter.

That underscores the challenges faced by Fast and other rural lobbyists during the 2010 Oregon Legislature. Republicans represent most of rural Oregon yet they are vastly outnumbered by Democrats. Most legislation affecting rural Oregon goes through committees led by urban Democrats.

City legislators may have little grasp of rural lifestyles, the business side of farming and how agriculture has changed over the decades to become much more environmentally friendly. The role of rural lobbyists is to help lawmakers understand not only the bills in this year’s legislative session but also the cumulative impact over time.

“When they’re in a hearing or they’re voting on the floor, they’re looking at that one bill and what the pros and cons of that bill are,” Fast said.

“But I don't think they have the real, full perception and reality of what else is happening to the rural community – to the agricultural sector – within one session, let alone what’s happened during the past few sessions and what the weight of that regulatory burden is.”

Fast strives to get past the alphabet soup of agriculture and make complicated issues digestible. She finds that legislators do listen. Even when they don’t agree, they will try to mitigate any potentially negative impacts.

“Legislators are just regular people,” she said. “Without hearing the other side, they’re making decisions in a vacuum.”

Capitol dynamics are further complicated by the turnover as lawmakers retire or are defeated for election. Like most areas of public policy, rural issues are more complex than people realize at first. Knowledge must be built up over time. Lobbyists spend years educating lawmakers about rural perspectives – from commodity pricing to employment, from water shortages to carbon cap-and-trade – and then start over with the new legislators.

“It’s just that their constituents are so much different,” he said.

“There are two Oregons — that’s for sure — and trying to bridge that in a very constructive way is sometimes difficult. To their credit, they’re very good listeners. These legislators from Portland, they’re open to hearing our story, but you certainly have to make the case why you need whatever you’re seeking.”

Interviews with Case, Fast and five other lobbyists from both sides of the Cascades showed common themes to their work:

Lobbyists embrace their cause

Growing up on a cattle ranch in Eastern Oregon, Mary Anne Cooper experienced what it was like to have regulations imposed from hundreds of miles away. She became a lawyer in private practice in Portland, representing individual farmers and ranchers. But she felt bad charging them for things they shouldn’t have had to deal with in the first place.

Now she works to affect those policies at their source by lobbying for the Oregon Farm Bureau as its vice president of public policy. “I really enjoy trying to bridge that gap between urban and rural,” she said.

Trust is most important

“Being effective in advocacy in any arena is 100 percent relationship-based,” Cooper said, and that means building trust with legislators and fellow lobbyists.

To some Americans, “lobbyist” is a four-letter word. But policymakers depend on lobbyists for in-depth information on issues, including the potential effects on people they represent. To be effective, lobbyists in Salem — regardless of their issue or which side they are on — must be known for providing credible, honest and accurate information.

“It’s our responsibility to show up and to communicate,” Dennee said.

For example, she said, many legislators do not appreciate the economic impact of adding new regulations on a heavily regulated industry. Current milk prices are so depressed that producers already lose money with every shipment that leaves their farm.

J.R. Cook, the founder and director of the Northeast Oregon Water Association, said it’s important to have a years-long strategy when lobbying, not simply go to policymakers with a gripe.

His mentors taught him to “make dang good and sure that you’re going to put the time and effort behind making your commitment stick. It’s really easy to have an excuse in Salem that ‘We tried to work with that region or that individual area. And we lived up to our side but they couldn’t live up to theirs, or they made promises they couldn’t keep.’”

Hearsay and dubious information flow freely through the halls of the Oregon State Capitol. Lobbyists must refute that misinformation before it creates doubt or confusion. That is a constant challenge, especially for offsite lobbyists such as Cook, who is based in Pendleton.

“If you’re not there every day to address that confusion or to answer a question in the hallway as a legislator walks by, that doubt can turn into a 10,000-pound boulder,” Cook said. “Legislators’ minds are made up before you’re able to even understand that an issue or a concern was raised.

“And you would think in an era of instant gratification and social media and email that you could address that via technology. But honestly speaking, the only way you can address that in something that moves as fast — and is as complex — as this Legislature and this state is by being there in person.”

Dennee agreed. “There is no end to misinformation that will come to legislators,” she said. “If you tell the mistruth or the half-truth with enough frequency, then it becomes the truth.”

“You can sit down in the hallway outside one of the hearing rooms, and you can get a week’s worth of meetings done just by running into people and having 5- to 10-minute conversations,” said Dale Penn of CFM Strategic Communications, whose clients include the Willamette Valley Wineries Association.

“That’s my day, moving from one sitting place to another, going to legislator meetings and monitoring hearings. Hopefully, you’ve done most of the prep work during the interim on some of the big issues for clients so you don’t have to do as much education” during the actual legislative session,” he said. “But there are always issues that crop up that require you to spend 80 percent of your time on a certain day on an issue.”

Daytimes at the Capitol generally are so hectic that early mornings and evenings are when lobbyists make phone calls and handle emails.

As Penn and the other lobbyists noted, much of their overarching educational role with lawmakers takes place in the months between legislative sessions. Many lawmakers making rural policy have never been to dairy farms, to hydroelectric projects such as Bonneville Dam or to other rural operations.

Nothing can replace the value of those first-hand conversations, whether on the farm or at the Capitol. “People do care about agriculture,” said Cooper of the Farm Bureau.

Cooper said if every farmer in Oregon went to the Capitol and testified on the one issue that mattered most to him or her, agriculture would have the most effective voice in the Capitol.

Lobbyists can explain issues but individuals’ real-life testimony has the most impact. That puts rural residents at a disadvantage when they live farther from the Capitol than their urban counterparts. Another disincentive is that public testimony at legislative hearings often is limited to one-and-a-half to two minutes per person.

“I can pull a grocer or a store owner or a doctor down to the Legislature to testify for one of my other clients, but I can’t pull a grower from Eastern Oregon,” said independent lobbyist Amanda Dalton, whose diverse portfolio of clients includes the Oregon Wheat Growers League.

“For them, it’s a two-day trip. It’s hard for them to justify that — when they’re going to come down and testify before a committee for two minutes.”

That reality reinforces underscores the importance of working with legislators between legislative sessions, including getting them into the wheat fields of Eastern Oregon, and dispelling their misconceptions.

“These growers and farmers are some of the truest conservationists I’ve met,” Dalton said. “They’re also scientists. And they’re international market traders. For my wheat growers, for example, 90 percent of their product is exported out of the country.