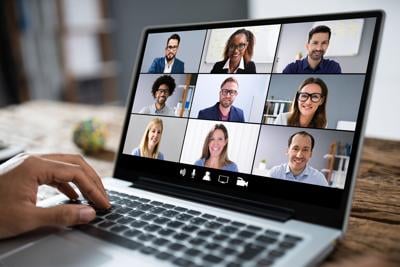 One of the biggest cultural shifts associated with the COVID-19 pandemic was the increase of virtual communication. Virtual meeting spaces such as Zoom, GoToMeeting or Microsoft Teams became a staple for conducting business and keeping in touch with loved ones.

Now that many Oregonians are vaccinated and returning to a sense of normalcy, local leaders in rural communities reflect on how virtual meetings changed their personal and work life.

At Harry & David in Medford, owned by 1-800-Flowers.com, Zoom and Microsoft Teams kept team members connected “more than ever,” according to Steve Lightman, group president of gourmet foods and gift baskets at 1-800-flowers.com, Inc.

“When we transitioned to remote work at the start of the pandemic, we knew it was critically important that we provide ongoing communication and updates to our team members as we navigated such an uncertain environment together,” he said, adding that one way they kept employees engaged was through bi-weekly company-wide town hall meetings.

Although the technology has kept the business collaborative, Lightman said that “nothing beats the in-person interactions,” a sentiment echoed across various industries and professions.

Many who have made extensive use of virtual platforms agree.

“I would say that Zoom has definitely made it easier to stay in touch for meetings and other such purposes,” Prineville Mayor Jason Beebe said. “But I really miss the in-person meetings and interactions.”

Prineville City Council recently held an in-person workshop, and it made the experience more personal.

“We were able to interact with each other, see each others reactions, and understand how people really felt about the conversations,” he said.

For Sen. Bill Hansell, there’s more to communicating than just verbal speech. Eye contact and body language, which is absent in virtual forums, are also important.

“I realize that with the pandemic restrictions that the governor has placed on Oregon this is the best option we have, but so much of my activity and how I operate is relationships and being able to sit down and work things out,” he explained. “You just don’t have that ability to communicate over Zoom. It’s had a major impact and it just isn’t the way to do the peoples’ business.”

Virtual meetings have, however, saved Hansell time because he doesn’t have to make as many trips to Salem. He said it’s 272 miles one way from his driveway to Salem, and one trip usually corresponds to three days due to the drive time.

Outside of time, virtual meetings have also allowed organizations to form networks in conjunction with other groups.

Susan Christensen, executive director of the Greater Eastern Oregon Development Corporation, said virtual meetings allowed for a group of various city, county, state and nonprofit entities in the fields of economic development, workforce, business development and health care to share resources during the height of the pandemic and “provide community and small business support.”

Despite the challenges of not being able to meet face to face, Blue Mountain Community College Interim President Connie Green said that virtual meetings allowed her to stay productive.

“The gift of technology is you can still feel like you accomplished something,” she said. “That’s the good part part.”

The hard part, she continued, is the lack of informal conversation and building of relationships that happens during in-person meeting breaks.

For some rural Oregonians, even getting internet access to attend virtual meetings was a hurdle, and Green said she noticed this problem with board members she worked with.

Virtual meetings have also increased an ease in multitasking, Green said. She shared that one day she was in two Zoom calls at once because of overlapping schedules.

“Was it good or bad?” She questioned. “Is it a good that I was multitasking? It’s a very different thinking standard. What’s attentive? What’s participatory? There’s a lot of questions brought to the forefront.”