You have permission to edit this article.
Edit
Home
Subscriber Services
Cover Story
The Land
Making a Living
The Culture
Features
Views
e-Edition
Share This
1 of 5 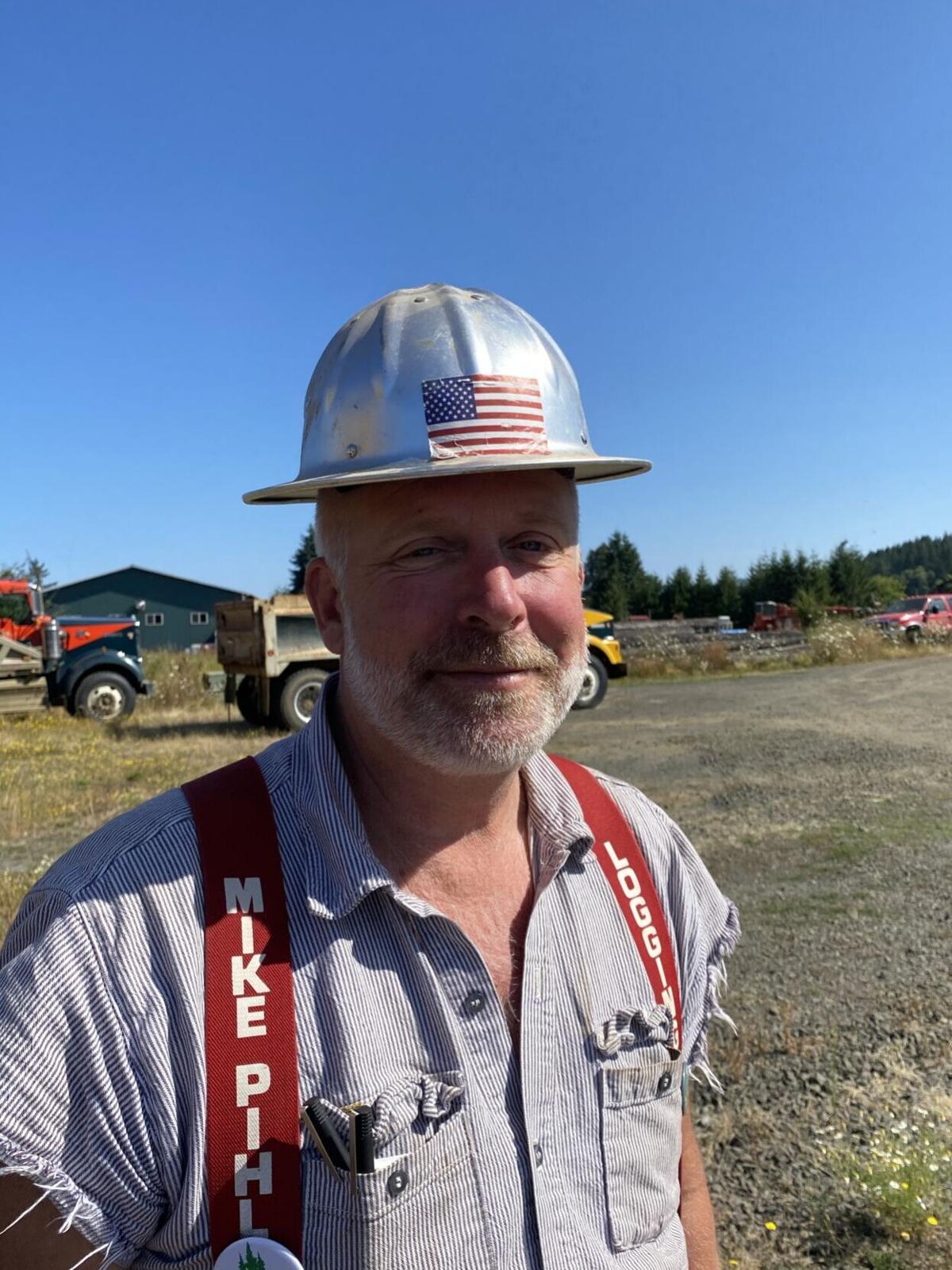 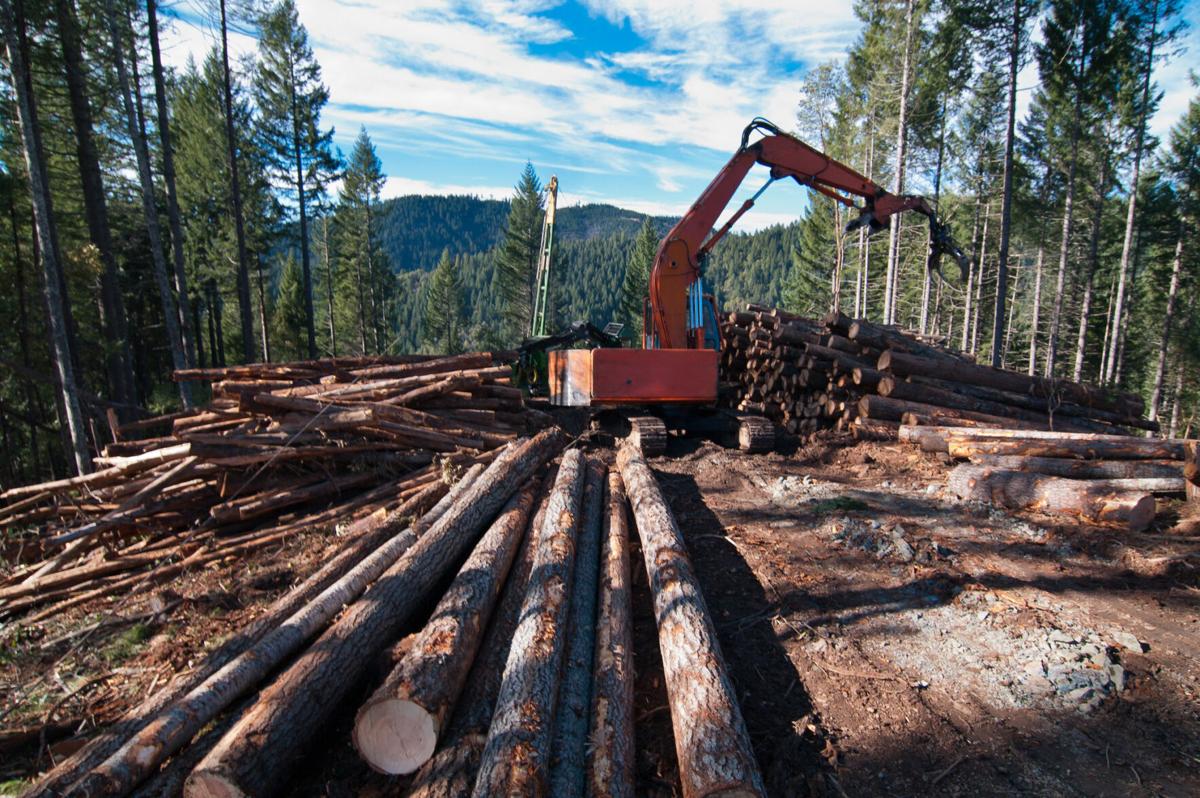 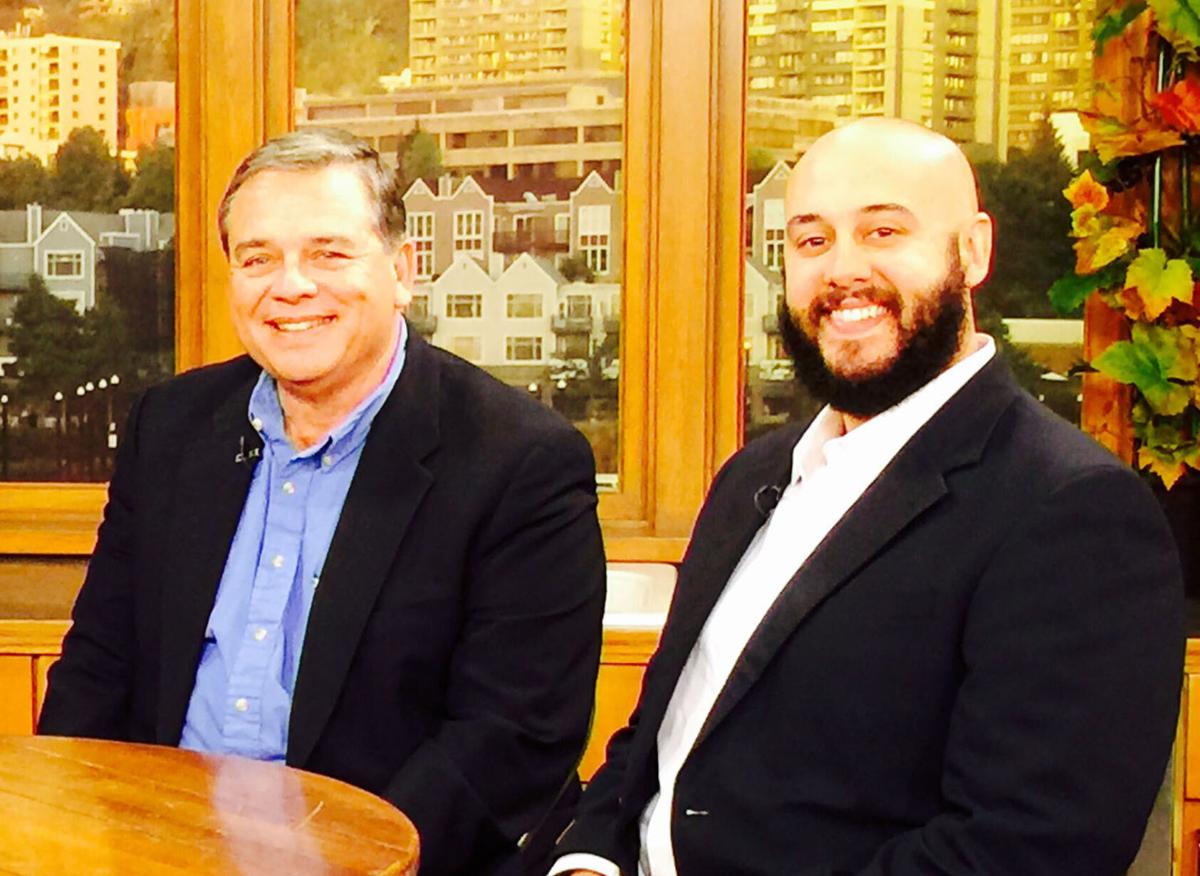 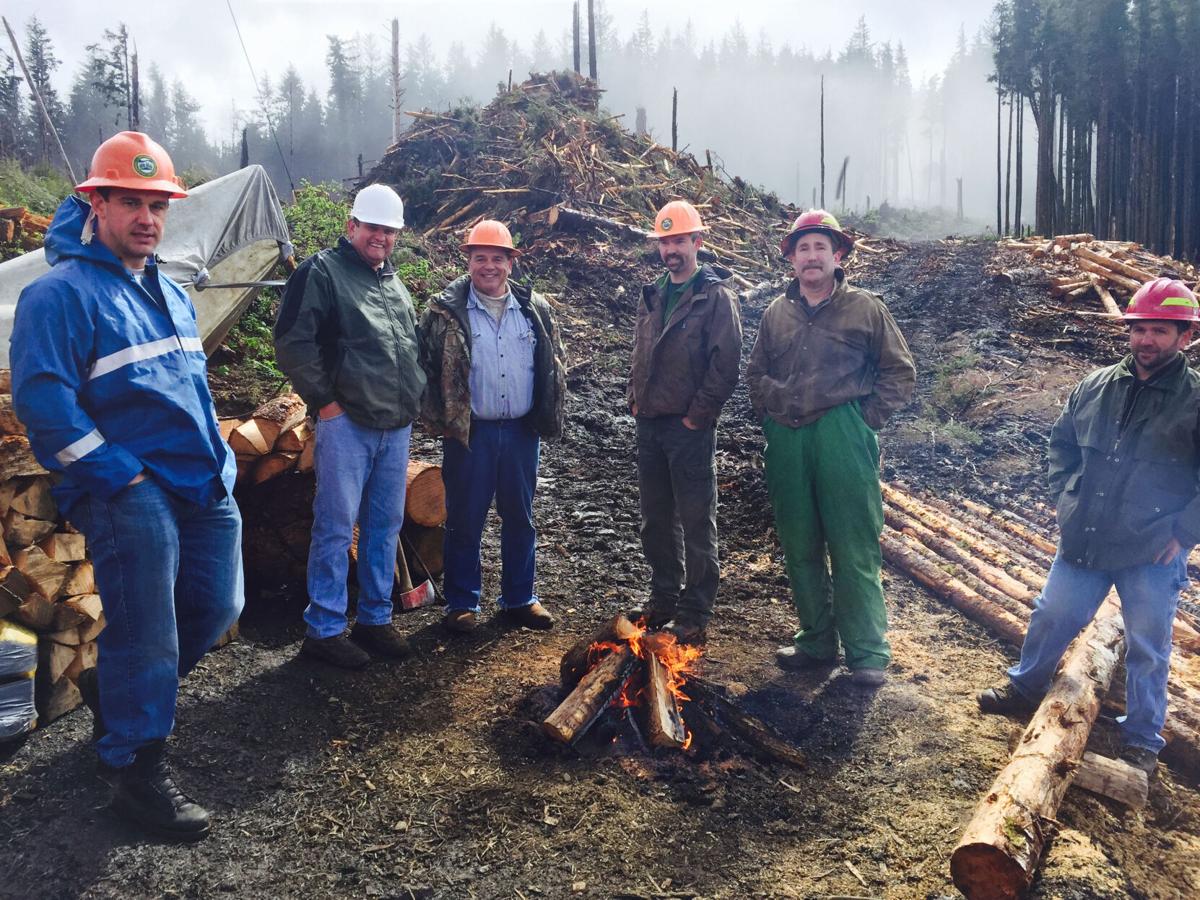 Bob Luoto, third from left, with state foresters as they assess a completed job. 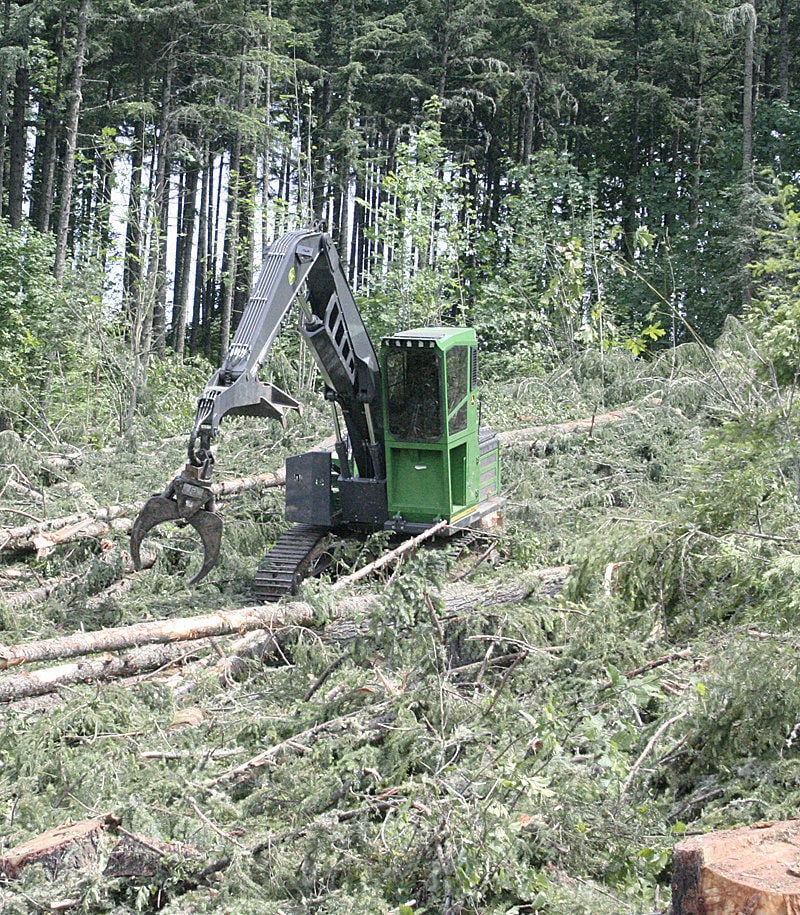 Felled trees are moved in preparation for being cut into log lengths and loaded onto a truck in the Oregon Cascade Range. 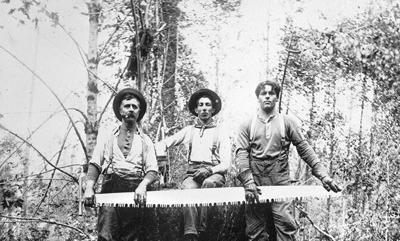 Bob Luoto paid his way through college by working in the woods with his dad during summers and raising a few livestock. He graduated in 1974 with a political science degree and instead of heading to law school, he returned to the woods.

“I had no problem with hard work because I kind of grew up that way,” said Luoto, who’s been logging ever since and operates Cross and Crown Inc. in Carlton.

In the 1970s and early ’80s, the woods supported many an Oregon community and many young people devoted their summers to working in the forests or the mills. Now, after roughly five decades in the business, the 68-year-old Luoto is partially backing out, selling some of Cross and Crown Inc.’s equipment.

Mechanization and computerization have altered every aspect of the wood products industry, including logging. Today’s loggers more often can be found in the cab of a machine than on the ground. Being a forest contractor necessitates a sizable investment in that equipment, with a single logging site requiring perhaps $1 million to $2 million in machinery.

“Things we didn’t believe could be harvested with machines 20 years ago now are,” said  Mindy Crandall, an assistant professor in forest policy at Oregon State University.

For an industry in constant change, the long-term outlook is good, according to Crandall. Oregon is renowned for highly skilled workers, efficient processing and desirable, fast-growing tree species.

“We produce a lot of high-value lumber in this state and that’s a market that’s pretty stable, because lumber is really tied to population and income,” she said. Such Oregon innovations as cross-laminated timber also bode well for the wood products industry.

Logging existed before statehood, and Oregonians still feel that visceral connection with the woods.

“Even though forests are a really dominant part of our society and our culture in Oregon, as the rest of our economy expands, we’re less reliant on that as an industry,“ Crandall said. “It has a larger importance because of social and cultural factors in some ways, although it’s hugely economically important, especially in our rural communities.”

In rural areas, jobs in the forest sector pay up to 92% more than the average jobs there, according to 2017 data from the Oregon Employment Department. But the employment has never recovered to pre-recession levels. Last year, the Employment Department predicted that the logging industry workforce would decline 2 percent between 2017 and 2027.

For generations, logging has involved everything from felling trees to fighting forest fires. But finding that next generation of loggers and other forest contractors is challenging. Competition comes from construction and other industries that pay well, require fewer long days and involve less travel.

Luoto recalled that government contracts in the late 1970s required him to remove any fallen material from creeks. “I was down there with rakes taking the needles out,” he said.

Scientific experts later realized that deadwood in streams could improve habitat for fish and other species. “That’s a prime example of bad science that gets into policy and they find out five to 10 years later it’s wrong,” Luoto said.

Luoto, who is a past president of both the Associated Oregon Loggers and the American Loggers Council, said he finds a lot of public misperceptions about the industry. People don’t realize that companies such as his replant five or six trees for each one they harvest. A clearcut that initially looks ugly will recover within a few years.

“We’re more regulated than any industry in the state. You can’t just go out and start cutting your own tree and just start hauling away. You can’t do that,” he said. “We’re professionals out there trying to help wherever we can in our community. We do the job right, and I’m not saying it’s done perfect by any means, but we try to do best science — as science tells us what to do and the state tells us what’s best.”

When Luoto started out with his dad, they primarily logged on public lands. The expectation was that federal forests would supply most timber for several decades while private timber regrew in preparation for being harvested in the 21st century. The spotted owl controversy and 1994 Northwest Forest Plan upended that equation, shifting logging from public to private lands, eliminating thousands of jobs and causing a number of Oregon mills to close.

In recent years, most of Cross and Crown’s work has been on private timberland. Mike Pihl Logging similarly operates on private lands, from Mount Hood to Astoria.

Pihl has been a logger for 43 years. “Luckily I still love my job. I dream about logs, and I do it seven days a week. I don’t know what else I’d do,” he said. “Working in the woods has to be in your blood. It becomes a lifestyle.”

On what was a typical day this summer, at 6 a.m. Pihl was at a job site in the Sandy area near Mount Hood. He walked the site, talked with neighbors about the job and then drove back to Vernonia to do office work and check in with mechanics at the company shop. He was back at the Sandy job site at 6 p.m., picking up machinery and transporting it to a new job near Banks. He got home to Vernonia about 9 p.m.

In the past year and a half, Pihl has developed an additional interest. He has become political, serving as president of Timber Unity, fighting carbon cap and trade legislation, and tracking other issues at the Oregon Capitol.

“Everybody’s hitting us at every angle to try to shut us down because of their perception of what we do,” he said. “The general perception of us is like a 1940s logger, where you just go in there and wipe everything out and run as fast as you can away from it. Nowadays, we’re extremely concerned about the environment.”

On the other side of the Cascades, Prineville-based Kriege Logging primarily does thinning in national forests. A federal ban on removing trees larger than 21 inches in diameter applies to all or parts of the Umatilla, Wallowa-Whitman, Malheur, Ochoco, Deschutes and Fremont-Winema national forests.

“We’ve grown up doing this all our lives. We not only work out there but we play out there. We hunt and fish. We want to keep it as pristine as we can, whether it’s working the land, making it more fireproof, or just being able to go out there and play on it,” he said.

The decline in mills has hurt local economies and increased transportation costs for companies such as his. In the 1980s, Kriege said, the  region had five sawmills. Now there is one, in John Day. Most of Kriege’s logs are trucked there, although it’s a distance away from where he usually operates. He also sometimes sends logs over the mountains to Mill City or Sweet Home.

“If we lose many more mills, it’s not going to work,” he said.

Government estimates put the number of Oregonians at work in the forest sector at more than 60,000, which would be about 3% of the state’s overall workforce. Rex Storm, executive vice president of Associated Oregon Loggers, suggests the number is far higher when all the forestry roles and types of businesses are included.

Those jobs range from ones that need no experience to ones that require college degrees, a background in the trades and/or extensive experience. Forestry careers are rewarding, Storm said, in part because the outcome is dependent on the fruits of one’s labor.

And there is another commonality.

“We’re working families,“ he said. “Farming and ranching and forestry all are very similar in that they are wonderful working families and they’re dominated by small businesses. That’s something Oregon should be very proud of.”