Skip to main content
You have permission to edit this article.
Edit
Home
Subscriber Services
Cover Story
The Land
Making a Living
The Culture
Features
Views
e-Edition
Share This
1 of 11 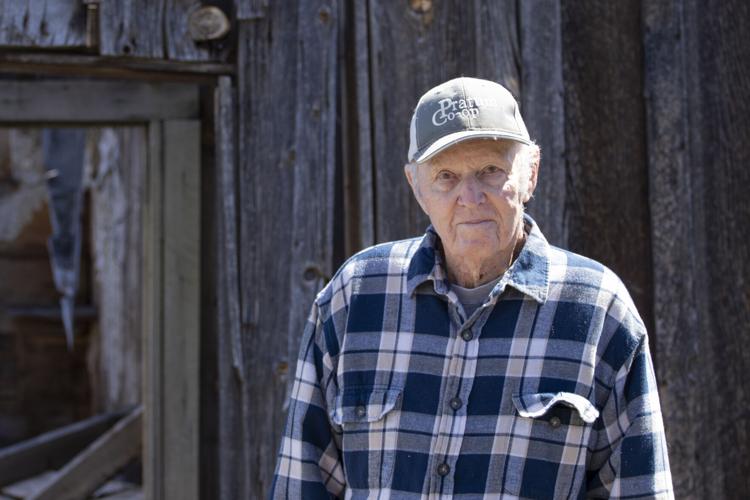 Gordon Clark in front of a crumbling wooden home on his property that once belonged to one of the early settlers. 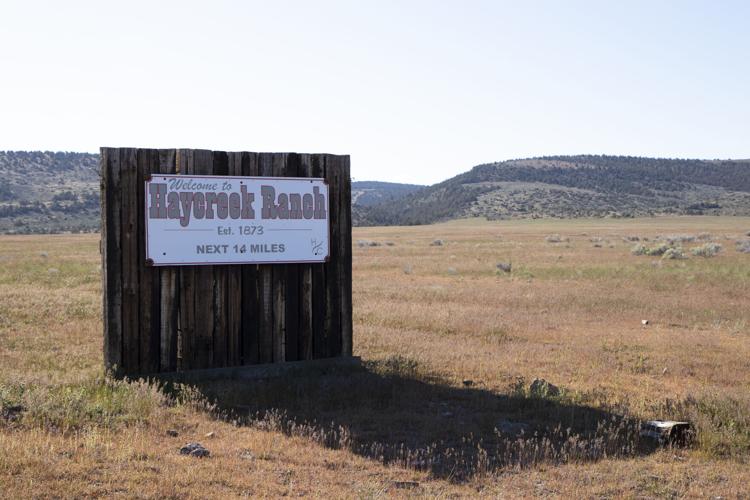 Hay Creek Ranch, one of Oregon’s oldest and largest ranch holdings, was established in 1873. 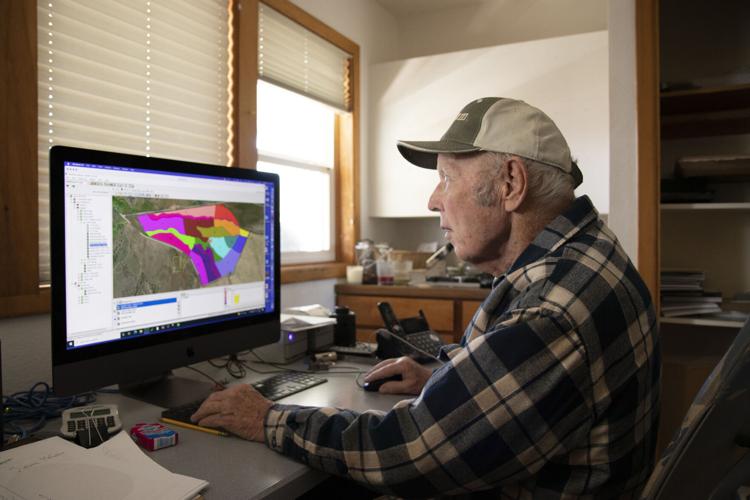 In his farm office, Gordon Clark looks at a map representing different soil types and qualities. Clark will use this map to do variable-rate fertilizing on his field, meaning applying different amounts of ferilizer to different parts of the field growing the same crop based on the soil profile in each section. 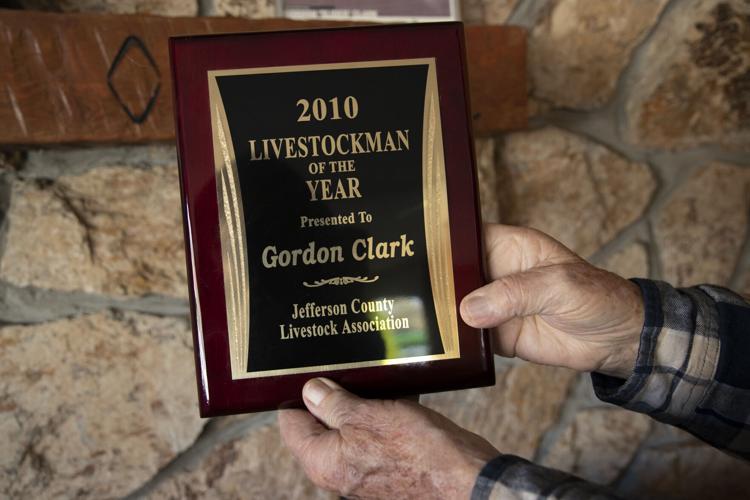 Gordon Clark's mantlepiece is lined with surfing trophies and other awards, but Clark says this one means the most to him. 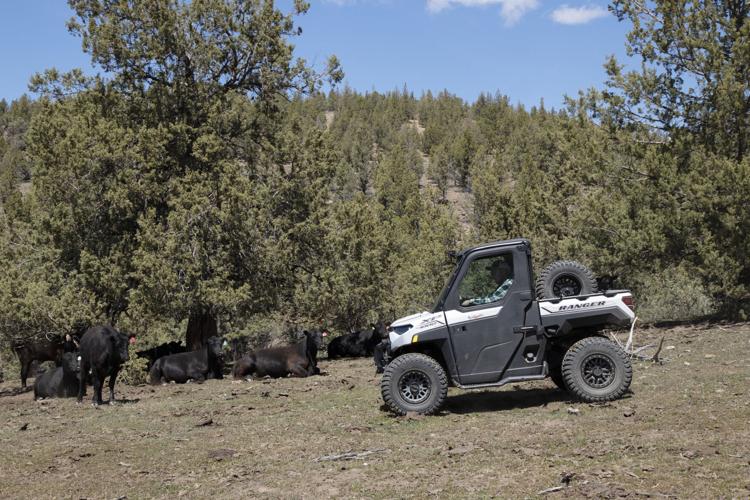 Gordon Clark drives his UTV through the cattle range. 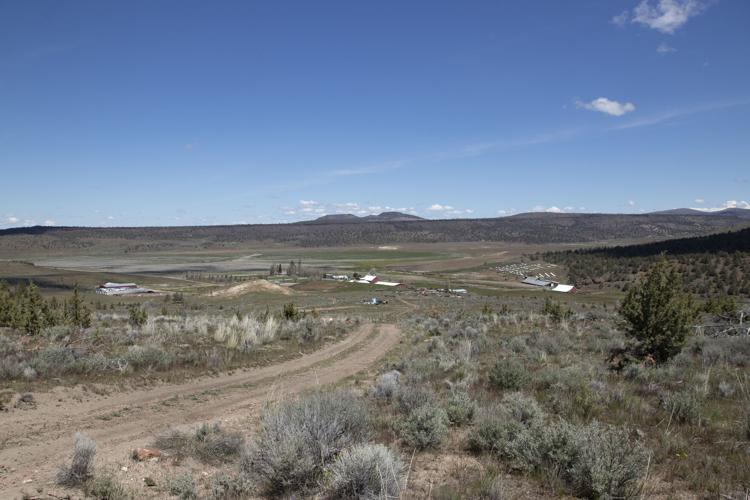 A view of the Hay Creek Ranch homestead and main barns from a hillside. 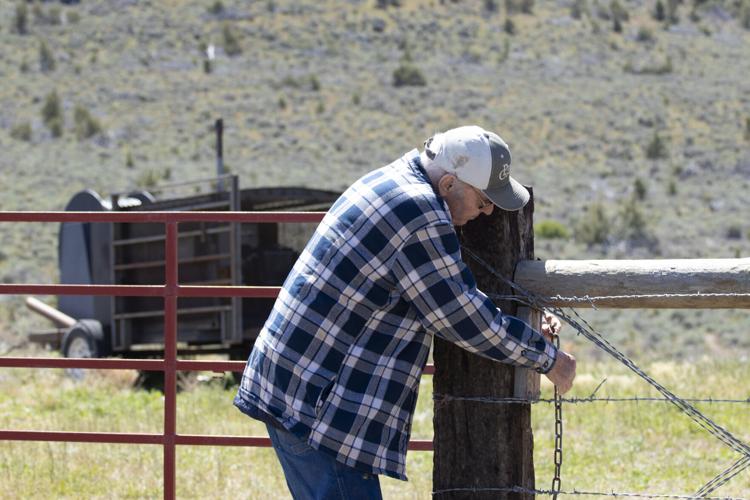 Gordon Clark closes a gate. In the background stands a well that he drilled many years ago. 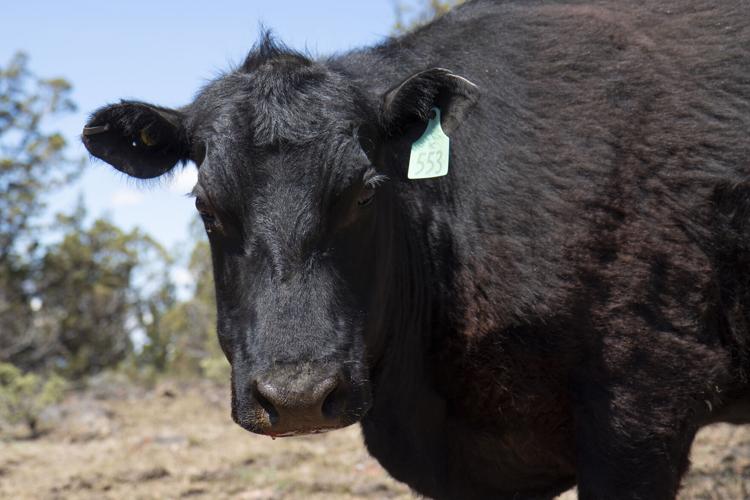 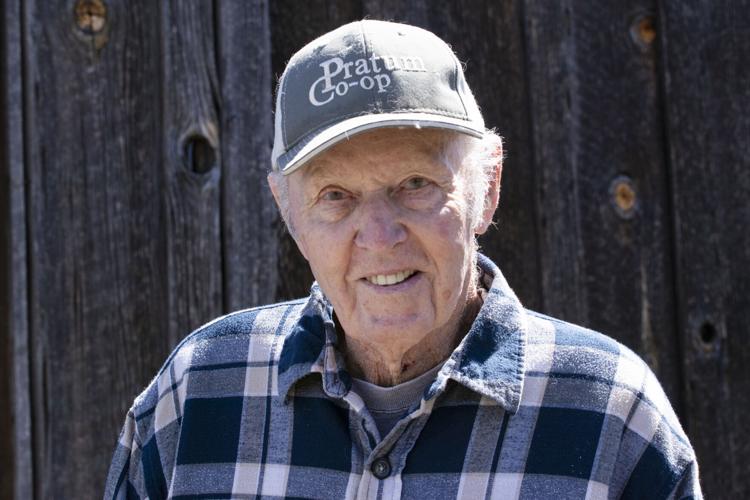 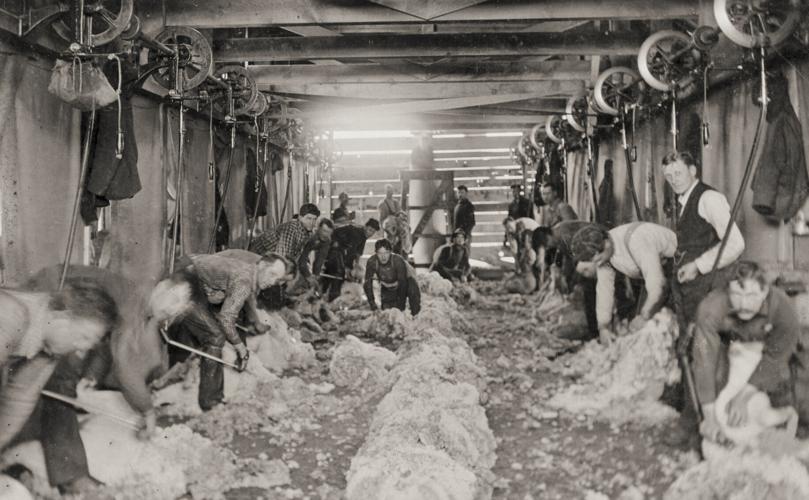 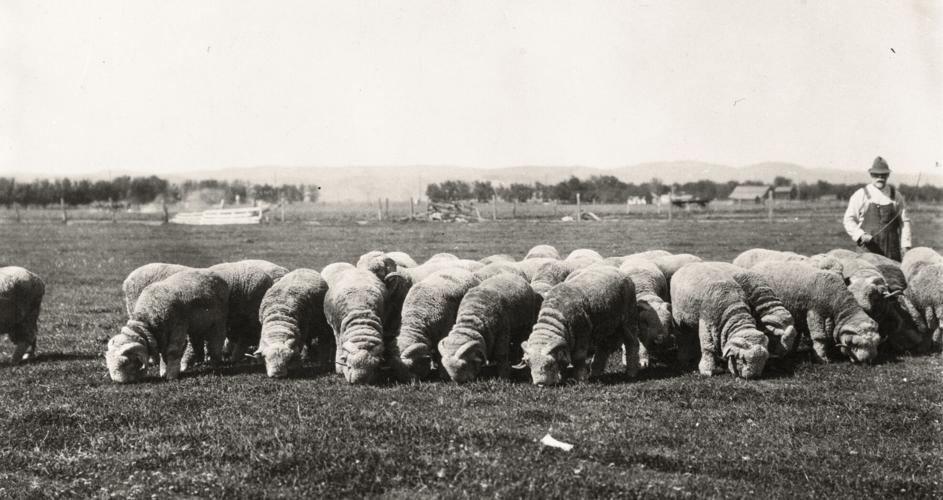 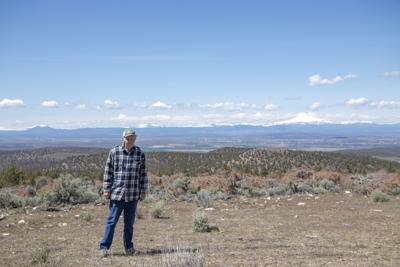 In the first life, Clark was a California surfing icon and owner of the world’s leading surfboard blank manufacturing company. Surfer magazine once placed him at No. 2 on its list of “25 Most Powerful People in Surfing.”

In his second life, Clark, 89, is a farmer who has raised thousands of cattle and sheep at Hay Creek Ranch in Central Oregon, one of the state’s oldest and largest ranch holdings, spanning 52,500 contiguous acres.

Clark says the common thread between his two lives is that both surfboard manufacturing and farming require strategy, curiosity and hard work.

“I’m a nuts-and-bolts guy,” said Clark. “I love solving problems and working with my hands.”

Because Clark wasn’t raised on a ranch, locals say he learned how to farm “by asking a lot of questions and reading a lot.” Often, Clark has copied ranchers around him, trying to emulate their success. At times, however, he has pushed the boundaries: using drones to manage his cattle, applying variable-rate fertilizer to his crops, installing inventive systems to stretch water during drought and using DNA profiles to improve his herd’s genetics.

“There’s a lot of people that have success in other businesses and they have a kind of romanticism about owning a ranch — you know, ‘Gunsmoke,’ ‘Bonanza,’ ‘The High Chaparral,’ those old Western shows,” said Anderson. “They end up with extra cash to invest and think, ‘Farming, that’d be fun.’ But 99% of them, when they figure out how much work there is, it isn’t long before they’re out of there. Gordon’s not that way. He took the challenge head-on.”

The man of Hay Creek Ranch

It would be hard to overstate how rugged Hay Creek Ranch is.

About 12 miles east of Madras, a gravel road cut into the sides of hills climbs up, then dips into a valley where the ranch headquarters lie.

Below, in the valleys, cattle graze and sunbathe in meadows scumbled with purple lupine.

Though Clark ambles slowly at 89, he drives fast. His employees often see him zipping up and down hills in his ATV across terrain so inhospitable it deters poachers and trespassers.

This land has played a prominent role in Central Oregon’s history.

In 1873, according to the Oregon Encyclopedia, David Baldwin established the ranch as Baldwin Sheep and Land Co.

Oregon Historical Society lists the ranch as one of the earliest locations where alfalfa was grown in the state.

After Baldwin, the property passed through many hands.

In the early 1900s, scores of homesteaders lived on the property on 320-acre parcels, and until 1912, the Dalles-Prineville freight and stagecoach lines ran through the ranch. The property had a post office, general store and school. Today, skeletal wooden frames of homesteaders’ cabins are scattered on the landscape.

Sheepherders once raised 50,000 sheep here each year in an era with unrestricted use of nearby forest lands in the Blue Mountains and Ochocos for summer grazing.

For two years, Clark said he went to public meetings, asking the Forest Service to control the wild horse population. Finally, he gave up, selling his flock to focus on cattle.

“I’m sad the sheep didn’t work out,” said Clark. “It was a fascinating experience.”

Bits of the sheep operation remain: Clark keeps several white Great Pyrenees and border collies, which once followed the flock. And by his fireplace stand two stuffed cougars that once threatened Clark’s sheep.

On the fireplace’s mantlepiece stand several trophies. The one Clark says he’s most proud of is a plaque from Jefferson County Livestock Association naming him 2010 Livestockman of the Year. Beside that are surfing awards, glimpses of a former life.

Born near Los Angeles in 1933, Gordon “Grubby” Clark grew up by the ocean, where he fell in love with surfing.

“When I was young, all I wanted to do was surf,” he said.

As a young man, Clark worked for legendary surfboard designer Tom Blake, who invented the surfboard fin, and Hobie Alter, often called “the Henry Ford of the surfboard industry.”

After studying engineering at Pomona College, Clark returned to work with Alter, this time on a special project: experimenting with foam blanks, blocks of foam from which surfboards could be made. The first lightweight foam-core surfboard hit the market in 1958.

Clark opened his own surfboard blank factory, Clark Foam, in 1961. According to Surfer magazine archives, the company at one time supplied 90% of the blanks that went into American-made surfboards and 60% of blanks worldwide.

At the crest of his success, Clark looked for investment opportunities. He recalls thinking that farmland, decreasing in supply, would one day prove valuable.

His chance came in 1993, when Hay Creek Ranch went up for sale. A victim of the savings and loan crisis, the property came at a bargain.

Clark hadn’t intended to be a farmer, but he recalls that when he started building fences, drilling wells and fixing things, he quickly realized he enjoyed the work and treasured the land.

So, in 1994, he tried his hand at ranching with Rambouillet sheep he bought from Cunningham Sheep Co. Around 1998, he added cattle.

Then Clark’s life took a U-turn.

In 2005, the surf industry was shocked when Clark announced the immediate closure of Clark Foam, which surf experts estimate had been worth $40 million.

Clark’s main reason for ending the business was that California’s environmental and workplace regulations had changed through the decades, in step with changing scientific knowledge.

A major chemical in Clark Foam’s blanks was toluene diisocyanate, or TDI. When modern research brought to light that TDI was toxic, public records show that Clark began to face litigation, regulations and citations from OSHA, the state EPA and individuals.

In response, Clark closed his factory. He started farming full-time in 2008.

Clark had a lot to learn about farming.

“I was considered innovative in the surfing industry, but in farming, I just copied people,” said Clark. “I ask a lot of questions, and every year, my questions get better.”

Clark’s program involves collecting tissue samples from tiny punch-holes in cows’ ears. He sends the samples to a lab called Neogen, where the DNA is analyzed. Clark then logs into his online Neogen portal to view data, including EPDs — Expected Progeny Differences — which evaluate an animal’s genetic worth as a parent and predict how future progeny will perform.

Clark uses the data to decide which heifers to breed and which to cull.

He also uses data on expected progeny differences to decide which bulls to buy. Every two years, Clark buys a young, top-quality Black Angus bull and uses its semen to artificially inseminate 600 cows per year, or 1,200 cows over the two-year period.

“I’m very careful about the bull I pick,” said Clark.

All of Clark’s artificial inseminations are Black Angus bull to Black Angus heifers. When a heifer fails to conceive following AI, however, Clark breeds a Charolais “cleanup bull” to that heifer.

Clark created a database to track genetic improvements over time.

“On the commercial side, I’d say he’s probably on the forefront,” said Sexson.

Clark breeds for three main traits: easy birthing, small body size and grading (mostly marbling). It might seem counterintuitive to breed for small animals; but Clark said he aims for able-bodied cows that can handle steep terrain and give birth easily on the range.

Karen Launchbaugh, professor of rangeland ecology and director of the University of Idaho Rangeland Center, said this kind of landscape-oriented thinking is innovative.

“I think it’s becoming more common for people to get access to genetics,” said Launchbaugh. “But what’s not as common is thinking about genetics in this landscape sense. (Clark) is ahead of his time on that one — thinking about how the cattle fit the landscape.”

Clark often uses drones to find cows on his vast property and uses walkie-talkies to alert his seven employees of the cows’ whereabouts.

He irrigates about 700 acres to produce silage.

Recently, Clark has been using a method called variable-rate fertilizing on his crop fields.

First, he analyzes the soil mosaic in a field, both overhead using a drone and on the ground by taking soil samples. Based on this, he creates a virtual, multi-colored map of his field. Each colored puzzle piece represents a different soil profile within the field.

He inserts this data, and a GPS device, into his tractor. Then, when the tractor moves across the field, it releases different volumes of fertilizer over different parts of the field. Using this “precision fertilizing” method, Clark aims to be sustainable, save money and improve soil health.

Clark has also looked for ways to boost the ranch’s water supplies.

“With the drought, we’re really scuffling for forage,” said Clark.

In Clark’s early years on the ranch, he drilled wells, but as restrictions on drilling have intensified, he has focused on re-developing historic springs and finding ways to move water.

“He really has improved the property a lot with the wells and pumps,” said Homer, of Painted Hills Natural Beef.

Both Homer and Anderson, the sheep farmer, said Clark is fortunate that his former occupation left him enough capital to invest in high-quality equipment like computer-controlled pumps.

Though water resources in the region continue to dwindle, Clark’s innovations have helped stretch the ranch’s water supplies.

According to historical records, Clark has now owned Hay Creek Ranch longer than any previous owner. But what’s in store for the farm’s future?

Clark has four children by two marriages, but none of his children are interested in farming.

“I think that’s the saddest part of the whole deal. It’s sad that there doesn’t seem to be anyone in line to carry it on,” said Anderson, the sheep rancher.

Clark plans to leave his property to one of his children, a daughter. Locals have speculated on who might eventually buy the farm from her: A millionaire? A movie agency looking to make Westerns? An investment firm? Only time will tell.

Whatever the future holds, Clark says he’s grateful to live on Hay Creek Ranch and plans to keep farming for as long as he can.

“The more I’m on the ranch, the more interested I get in it,” said Clark. “I’ve had two lives, but I wish I’d been a rancher all my life.”

Sierra Dawn McClain is a reporter for the Capital Press.