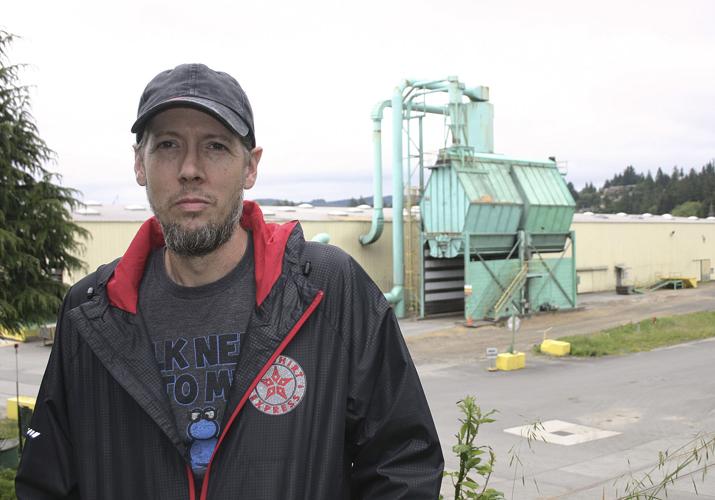 Jeff Geier, 41, was a 17-year employee of Georgia-Pacific Wood Products, working at the company's lumber mill in Coos Bay. "I thought I would retire from them," Geier said of his time prior to the mill closing. 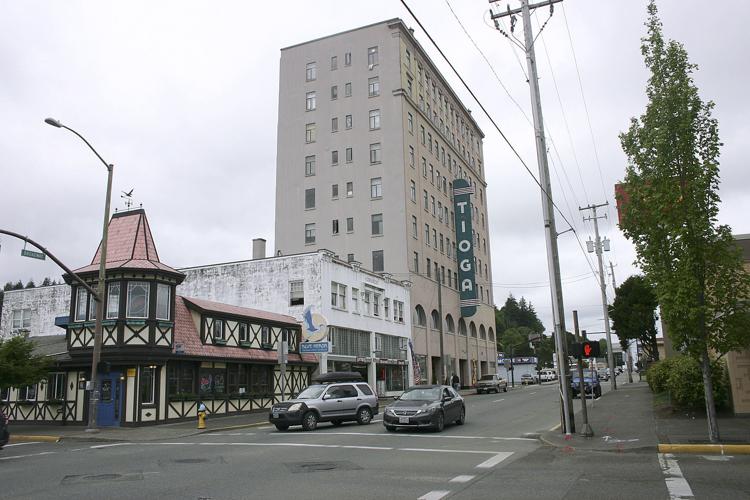 The loss of 111 jobs at the Georgia-Pacific lumber mill has an economic ripple effect in Coos Bay and neighboring communities. Wood products manufacturing pays higher-than-average annual wages in the county, totaling $53,035 a year. 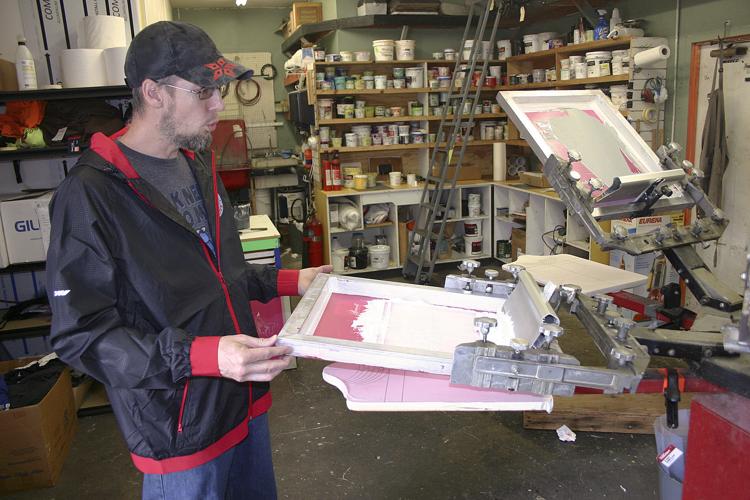 After losing his job at the Georgia-Pacific Wood Products lumber mill in Coos Bay, Jeff Geier and his wife run a T-shirt design and printing store in nearby North Bend, though he said it is not enough by itself to support the family. 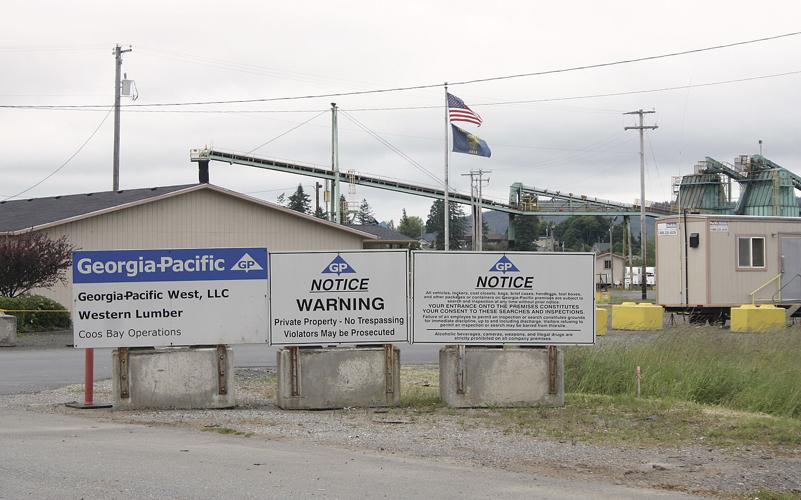 Georgia-Pacific Wood Products announced on April 11 that it was closing its lumber mill in Coos Bay, laying off all 111 employees. 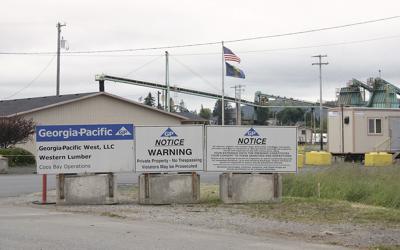 Jeff Geier, 41, was a 17-year employee of Georgia-Pacific Wood Products, working at the company's lumber mill in Coos Bay. "I thought I would retire from them," Geier said of his time prior to the mill closing.

The loss of 111 jobs at the Georgia-Pacific lumber mill has an economic ripple effect in Coos Bay and neighboring communities. Wood products manufacturing pays higher-than-average annual wages in the county, totaling $53,035 a year.

After losing his job at the Georgia-Pacific Wood Products lumber mill in Coos Bay, Jeff Geier and his wife run a T-shirt design and printing store in nearby North Bend, though he said it is not enough by itself to support the family.

Georgia-Pacific Wood Products announced on April 11 that it was closing its lumber mill in Coos Bay, laying off all 111 employees.

COOS BAY — Jeff Geier heard the rumors spreading for weeks all over town that Georgia-Pacific Wood Products planned to close its lumber mill in Coos Bay, where he spent the last 17 years working his way up the professional ladder.

When the official announcement finally came on April 11, Geier was no less shocked and dismayed.

"That job is what supported my family," Geier said.

Geier, 41, lives in nearby North Bend with his wife and four kids — ages 18, 13, 6 and 3. They bought a custom T-shirt design and printing shop in November 2018, though Geier said the business was never meant to pay the bills.

It was his position at the mill, which produced dimensional lumber from 2-by-4 up to 2-by-12 boards, that made ends meet. He started out on the graveyard cleanup shift before learning how to operate nearly every piece of machinery as a handyman.

Most recently, Geier was a journeyman saw filer in charge of maintaining and repairing each individual saw blade at the mill and planer facility.

"I enjoyed working at that mill," Geier said. "I thought I would retire from them."

The abrupt closure left Geier and 110 other employees without jobs, though they remained on the company payroll through June 11 as part of their severance package. A spokesman for Georgia-Pacific LLC, based in Atlanta, blamed unfavorable market conditions and "historically unreliable" local rail service for the decision.

Losing 111 high-paying jobs was an immediate blow to the coastal community. However, state and local officials have moved quickly to help the workers land on their feet.

Geier said he is still job searching while balancing managerial duties at his store, Teeshirt Express.

While the industry is a shell of its former self, lumber production remains relatively prominent in Coos County compared to the rest of Oregon.

According to figures from the Oregon Employment Department, wood products manufacturing accounted for 893 jobs in Coos County in 2018 — roughly 4% of employment, versus 1.2% statewide.

Guy Tauer, a regional economist for the state covering southwest Oregon, said he could not speak directly about the Georgia-Pacific mill closure. But, he said, it is undeniably difficult to replace jobs locally within the wood products sector.

"We haven't seen a lot of growth in other industries that pay commensurate to those average wages," Tauer said.

Not only does that hurt the employees themselves, but has a real impact to the area as a whole, Tauer said. Housing, car dealerships, restaurants and retail could all suffer hits with fewer high-paying, family-wage jobs.

"It affects spending," Tauer said. "It multiplies and ripples through the economy."

Shaun Gibbs, economic development specialist with the South Coast Development Council — a regional nonprofit focused on business retention and expansion — said the organization spent nearly a year trying to meet with Georgia-Pacific to discuss how things were going at the mill, but were unable to connect.

Gibbs said it is possible they could have connected the company with state programs or other incentives to provide additional support.

"Any time you lose a major employer in the community, it's disappointing," Gibbs said. "It's a major hit to the local and state economy."

Decades ago, lumber and wood products dominated the manufacturing landscape in Coos and Curry counties, with more than 8,000 jobs in the late 1950s and early 1960s.

Officials point to a number of factors for the decline.

State Rep. David Brock Smith, R-Port Orford, criticized the lack of available timber harvest from federally owned forests. A 2017 report from the Oregon Office of Economic Analysis shows that, since the 1970s, harvest dropped from more than 8 billion board feet to less than 4 billion board feet, including a 90% reduction on federal land.

"The lack of management on the federal lands and subsequent lack of supply continues to have devastating impacts to our rural economies," Brock Smith said following the Georgia-Pacific mill closure.

Coos County has 750,000 acres of public and private forestland. The International Port of Coos Bay was, at one time, known as the world's largest lumber shipping port.

Timm Slater, executive director of the Bay Area Chamber of Commerce, said public timber supply has been restricted by increased environmental regulations such as the listing of the northern spotted owl under the Endangered Species Act in 1990.

But Slater, who used to work as a timberland manager for wood products manufacturer Weyerhaeuser, said operations have also changed in the mills themselves with increased automation, requiring fewer workers.

"Therefore, we had a drastic change in the number of jobs that were available in that sector," Slater said. "Since that time, we've been looking to diversify, looking to come up with new manufacturing opportunities and new retail opportunities."

Unemployment in Coos County stands at 5.6%, which is slightly higher than the state unemployment rate of 4.3%.

Todd Goergen, who owns the Boxcar Hill Campground and serves as president-elect of the Bay Area Chamber of Commerce, said the Georgia-Pacific closure was a setback, but he believes the area is positioned to bounce back quickly.

Gibbs, with the South Coast Development Council, said multiple buyers are interested in purchasing the Georgia-Pacific mill site, though details are confidential.

"We are confident that a new user will be found within the next three to six months," Gibbs said. "It's just about finding the right fit."

Until then, state and local agencies are reaching out to help the former Georgia-Pacific employees as part of the Oregon Dislocated Worker Program. A "rapid response" team held its first meeting on April 14, providing the workers with information about unemployment insurance, job training programs and other workforce services.

In addition to SCBEC, other members of the ream included representatives from the Southern Oregon Workforce Investment Board, the Oregon Department of Human Services, the state Employment Department local trade unions.

Corliss said the team also arranged for an impromptu job fair on May 18 with lumber companies including Roseburg Forest Products, which runs a plant in nearby Coquille, as well as the Swanson and Seneca companies that run mills in nearby Douglas and Lane counties.

Finally, SCBEC hired Geier to work on the team as a "peer navigator," reaching out directly to his former peers at Georgia-Pacific and informing them about the rapid response.

On his desk at Teeshirt Express, Geier has a list of all the names and phone numbers for the employees. Most of the folks he talks to are just scrambling to find work, he said, and worrying about how they will be able to support their families.

So far, Geier estimates about 50 of the workers have found new jobs. As for the rest of them, including himself, Geier said he hopes someone will buy the Georgia-Pacific mill and reopen it. He does not know yet what the future will hold.

"I know I'm going to miss it," Geier said. "I truthfully enjoyed going in there every day."