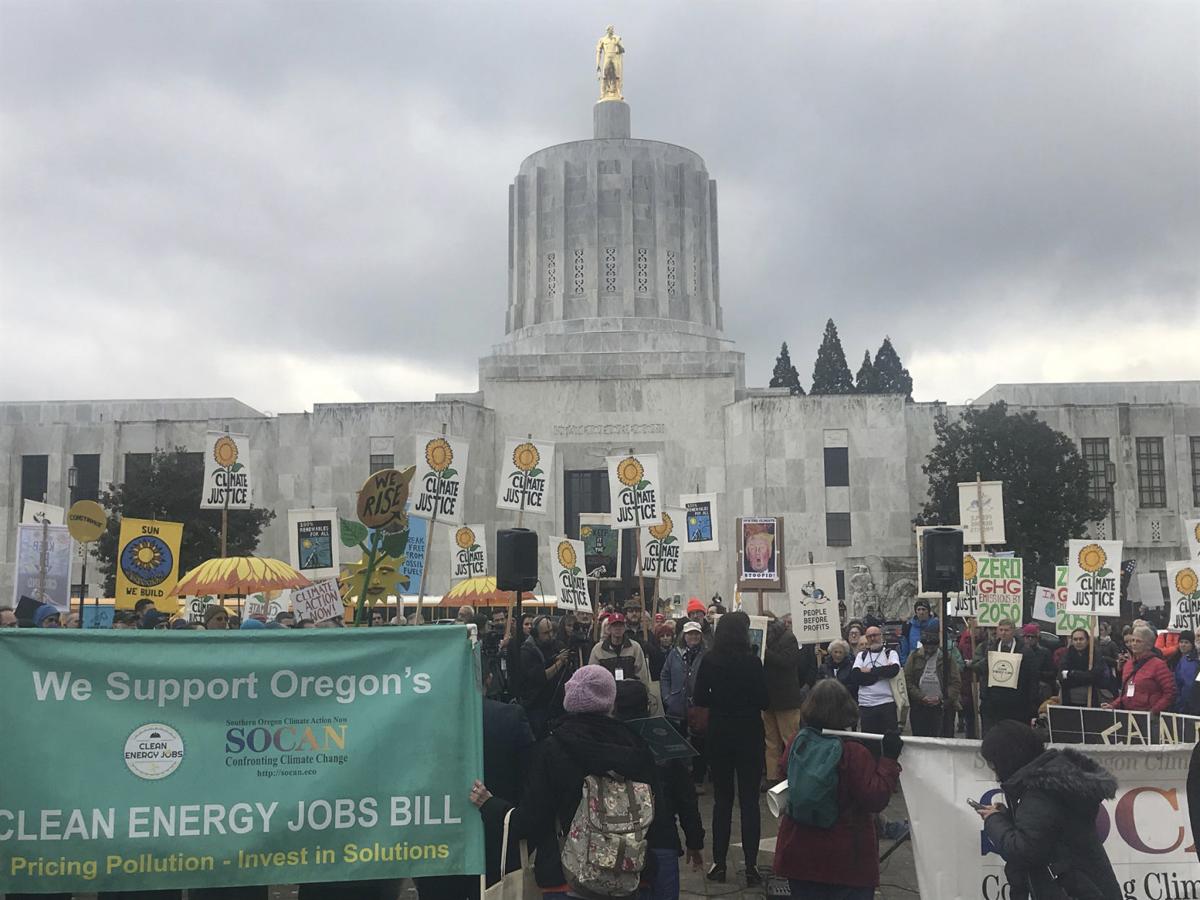 Supporters of cap and trade rally outside the Oregon State Capitol on Feb. 6. Oregon is on the precipice of becoming the second state after California to adopt a cap-and-trade program, a market-based approach to lowering the greenhouse gas emissions behind global warming. 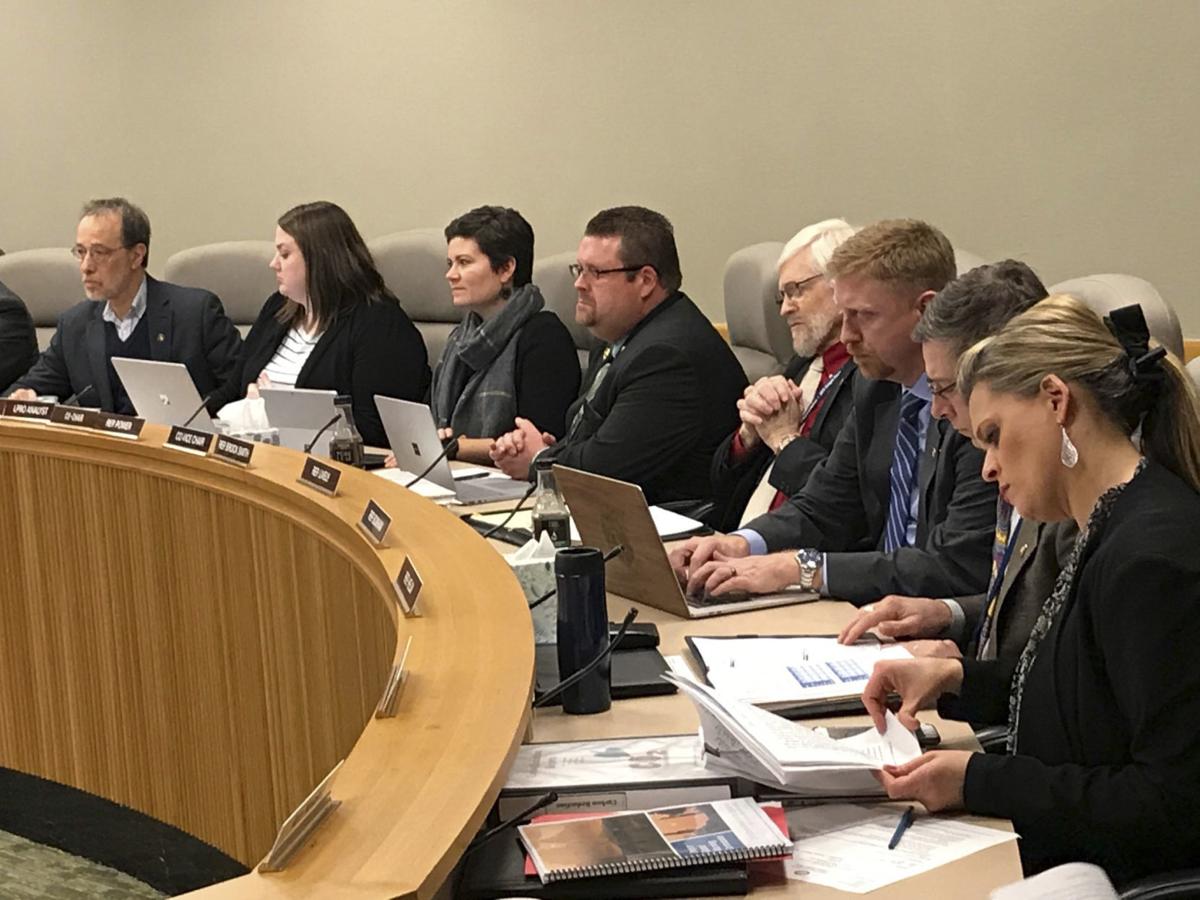 George Plaven/Capital Press Members of the Oregon Legislature's Joint Committee on Carbon Reduction listen to testimony about a proposed cap and trade bill during a hearing Feb. 11 at the State Capitol. 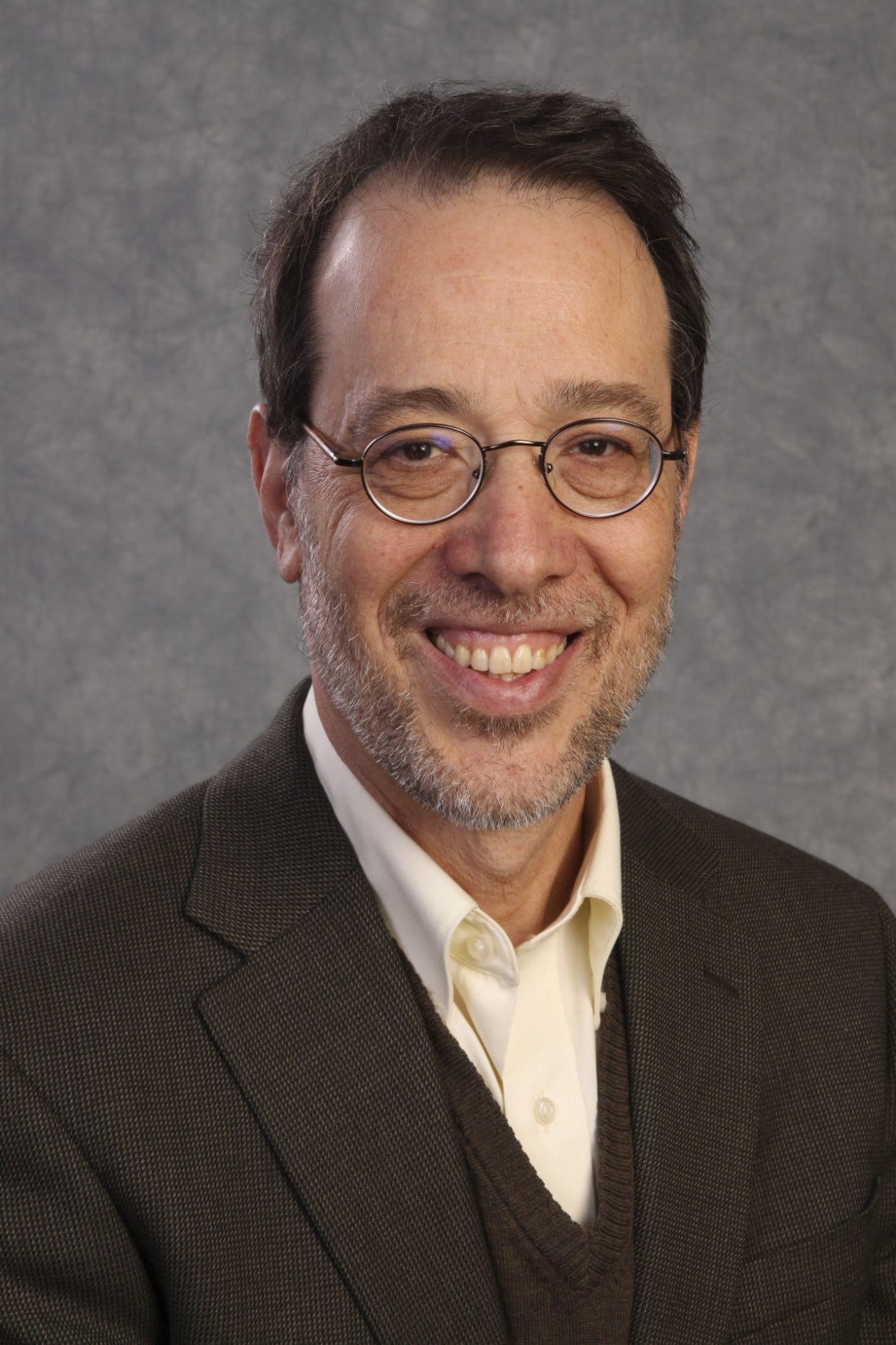 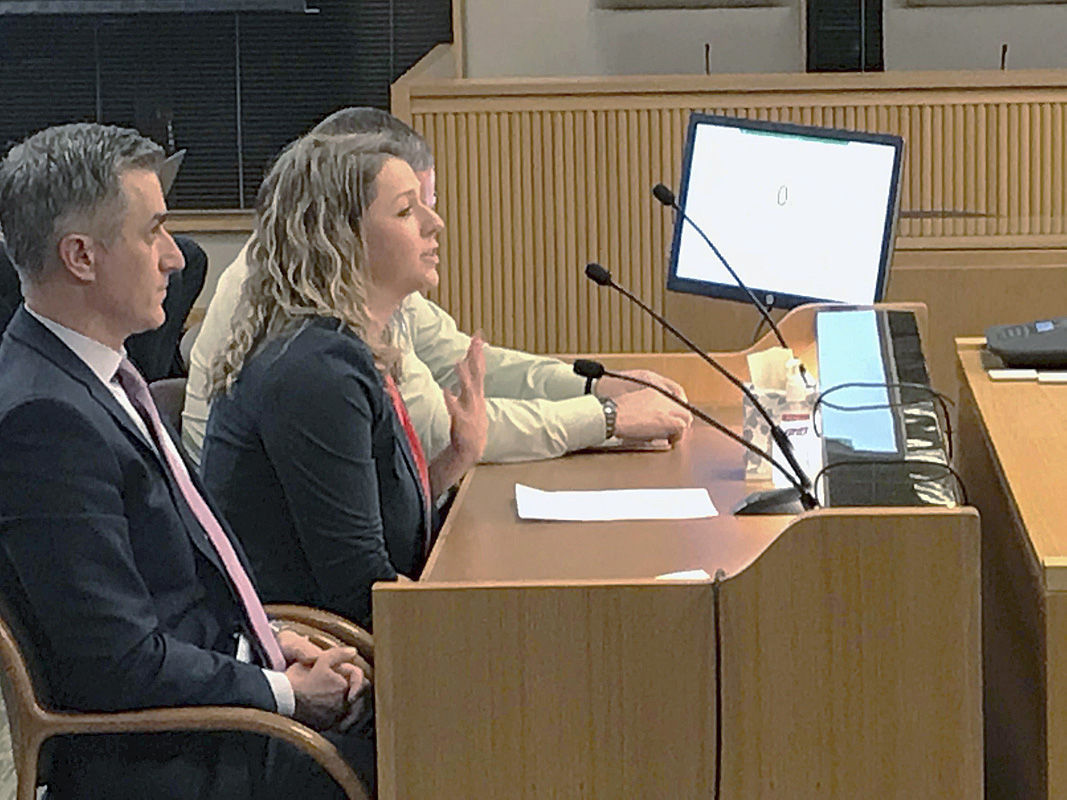 George Plaven/Capital Press Brenda Frketich, center, testifies against cap and trade during a hearing Feb. 11 at the Oregon State Capitol. 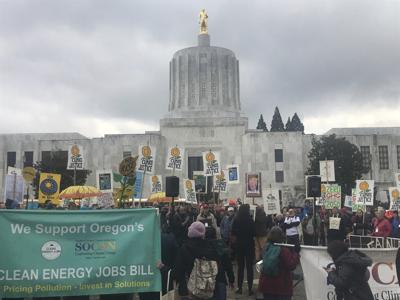 Supporters of cap and trade rally outside the Oregon State Capitol on Feb. 6. Oregon is on the precipice of becoming the second state after California to adopt a cap-and-trade program, a market-based approach to lowering the greenhouse gas emissions behind global warming.

George Plaven/Capital Press Members of the Oregon Legislature's Joint Committee on Carbon Reduction listen to testimony about a proposed cap and trade bill during a hearing Feb. 11 at the State Capitol.

George Plaven/Capital Press Brenda Frketich, center, testifies against cap and trade during a hearing Feb. 11 at the Oregon State Capitol.

SALEM — Oregon lawmakers are considering a new carbon pricing policy during this year’s legislative session aimed at regulating greenhouse gas emissions in an effort to combat the effects of climate change.

The legislation, known as cap and trade, worries many of the state’s farmers and ranchers about higher fuel and energy prices at a time when profit margins are already thin, while others see it as a needed step toward climate resilience.

Cap and trade was reintroduced in the Legislature on Feb. 4, with state Democrats riding a wave of momentum after winning a supermajority of 60 percent in both chambers during the 2018 midterm elections. At least one Senate Republican, Cliff Bentz of Ontario, has said the bill is all but certain to pass, though there is still time to impact the proposal.

“I think all of us are working on amendments to this bill,” Bentz said.

Agricultural groups are lobbying to protect farmers and ranchers from projected hikes in fuel and energy prices. Jenny Dresler, of the Oregon Farm Bureau, said too few safeguards are built into the bill for growers who rely on diesel fuel, gasoline and inputs made from natural gas, or who ship their products long distances.

“That’s a big point for us, that a lot of rural families and farm and ranch families are going to bear a disproportionate burden of these costs,” Dresler said.

The legislation, House Bill 2020, outlines a new cap and trade plan and calls for the creation of a state agency to oversee it.

Though many details of the program are yet to be determined, companies would have to buy “allowances” for every metric ton of carbon — usually in the form of carbon dioxide — they generate in total. Only companies that emit more than 25,000 metric tons of carbon a year would be regulated, including electric utilities and natural gas and fuel suppliers.

The state would sell the majority of allowances through regular auctions, and money collected would then go toward climate-friendly initiatives across the state, such as accelerating the adoption of renewable resources, weatherizing homes and thinning excess forest debris that feeds larger wildfires.

Sen. Michael Dembrow, D-Portland, is chairman of the Senate Environment and Natural Resources Committee, and co-chairman of the Joint Committee on Carbon Reduction, which is holding hearings on the bill. He said HB 2020 allows the state to address climate change while directly benefiting the state economy.

“We need to take climate action really seriously,” Dembrow said. “That’s what this bill does.”

HB 2020 does call for establishing a Joint Committee on Climate Action, though Baertschiger said the rules for cap and trade — and how the money will be spent — will be written by the new Climate Authority, with a director appointed by the governor.

“Once this is implemented, the Legislature is basically out of the picture,” Baertschiger said. “It is a way the executive branch, on their own, can control production in the state of Oregon.”

It is widely expected that, once cap and trade is passed, Oregon would link its program to the Western Climate Initiative, which implements similar programs in California and Quebec, Canada.

The allowances that companies must buy for emissions are estimated to cost $16 per ton of carbon in the first year, increasing fuel prices in Oregon by 15 to 16 cents per gallon. Oregon’s Carbon Policy Office estimates that cap and trade will apply directly to about 100 companies statewide.

Under the current proposal, agriculture and forestry are exempt from the carbon cap but are not immune from the effects of higher fuel and energy prices.

Dresler, with the Farm Bureau, said higher fuel costs alone could cost producers an extra $1,000 to $5,000 per year, depending on their consumption. Commercial fuel and dyed diesel for offroad use are not currently exempted in the bill.

Farmers are price-takers in the global market, Dresler said, meaning they have no control over pricing and typically cannot pass on their cost increases to the consumer.

“Any of these cost increases are going to be borne by the farm families,” Dresler said.

Natural gas customers would also be impacted by cap and trade, which could have a significant impact on the food processing and nursery industries.

Gas companies, however, would not receive free allowances. NW Natural, the state’s largest gas utility, calculates that rates for small commercial businesses would climb by 13 percent in 2021, 44 percent by 2035 and 60 percent by 2040.

Craig Smith, director of government affairs for Food Northwest, an association that represents the food processing industry, said processors rely heavily on natural gas to fuel their boilers. If gas rates go up, he worries that companies such as Lamb Weston could move out of the state.

“A lot of our companies already have locations in (Washington and Idaho), so they just move production,” Smith said.

Tom Fessler, owner of Woodburn Nursery in Woodburn, Ore., also testified before the Joint Committee on Carbon Reduction. Natural gas is the most cost-effective fuel for heating greenhouses, he said, and there is not an adequate or inexpensive alternative.

“We cannot continue to absorb these increases, as our customers are unwilling to pay the prices needed to sustain our business,” Fessler said.

By 2050, the Carbon Policy Office estimates Oregon’s cap and trade plan would eliminate 43.4 million metric tons of carbon annually from the atmosphere.

Critics point out that amount represents just 0.12 percent of global greenhouse gas emissions, which reached an all-time high of more than 36 billion metric tons in 2018. Cap and trade, they argue, would cost too much for too little benefit.

Supporters, however, say the state can no longer afford to stand by and do nothing about climate change.

“The writing is on the wall. The state is already bearing the cost for this,” said Dylan Kruse, director of government affairs for the Portland-based nonprofit Sustainable Northwest. He points to more frequent droughts, which in 2018 helped fuel Oregon’s most expensive wildfire season to date, topping $514 million.

The last five years have been the hottest on record, according to the National Oceanic and Atmospheric Administration. Average global temperatures in 2018 were just over 2 degrees higher than normal, and the U.S. experienced 14 weather and climate disasters — including wildfires in the West and hurricanes in the East — each with losses exceeding $1 billion and totaling around $91 billion in damages.

Megan Kemple, coordinator of the nonprofit Oregon Climate and Agriculture Network, or OrCAN, said more than 200 farms have signed on in support of cap and trade legislation. OrCAN was started by Kemple in 2017 to promote agricultural practices that mitigate climate change and sequester carbon.

“The farmers I’m in communication with are concerned about the impacts of climate change on their livelihoods and their businesses,” Kemple said.

Ramon Ramirez, with the labor union Pineros y Campesinos Unidos del Noroeste, or PCUN, testified in favor of the cap and trade bill on behalf of farmworkers.

PCUN, based in Woodburn, is Oregon’s largest Latino organization, representing 6,500 members. Ramirez served as president of the group until last November and now works as an policy organizer.

“In this debate of reducing carbon, we are on the front lines,” Ramirez said. “Farmworkers who toil on the land to put food on the American table do backbreaking work while working with carbon and toxic chemicals.”

It is no coincidence, Ramirez added, that the life expectancy for farmworkers is 49 years old compared to 78 for the general population, citing statistics from the National Center for Farmworker Health.

While the Oregon Constitution mandates that any money collected from fuel suppliers must be spent within the State Highway Fund, HB 2020 establishes a Climate Investment Fund that can provide grants to help pay for such activities as weatherizing homes, installing wind and solar power and improving irrigation efficiency.

Kemple said farms and ranches would be eligible to receive this funding, making their businesses cleaner and more sustainable in the long run. “We’re very supportive of the policy,” she said. “There is an opportunity there for agriculture as well.”

Farms and ranches could also sell allowances on the open market generated by projects that sequester carbon — known as offset projects — though specific details are still subject to rule-making.

A 72-page economic report on the cap and trade proposal, prepared for the Carbon Policy Office, states the policy may actually boost job growth over the long run. The analysis, by Berkeley Economic Advising and Research in Berkeley, Calif., forecasts that Oregon can hit its 2050 greenhouse gas reduction goals while boosting the state’s economy by 2.5 percent, adding 23,000 jobs.

Brad Reed, a spokesman for Renew Oregon, a clean energy advocacy group formed in 2015 that has campaigned for cap and trade, said the bill is still far from perfect. He said supporters would like language that sets aside a certain percentage of funds for rural Oregonians, and hopes the state will limit the amount of free credits being offered to businesses that are trade dependent.

“Because there is some back and forth about how many free allowances to give to various entities, that is going to cut into the amount that is collected for the program,” Reed said. “It’s going to affect our ability to reinvest that amount of money.”

Dembrow said Oregonians need to do their part, and he is confident they will not be acting alone.

“If we can come up with a good program that can significantly reduce our emissions while at the same time benefiting Oregon’s economy, then we believe other states will follow us,” he said.