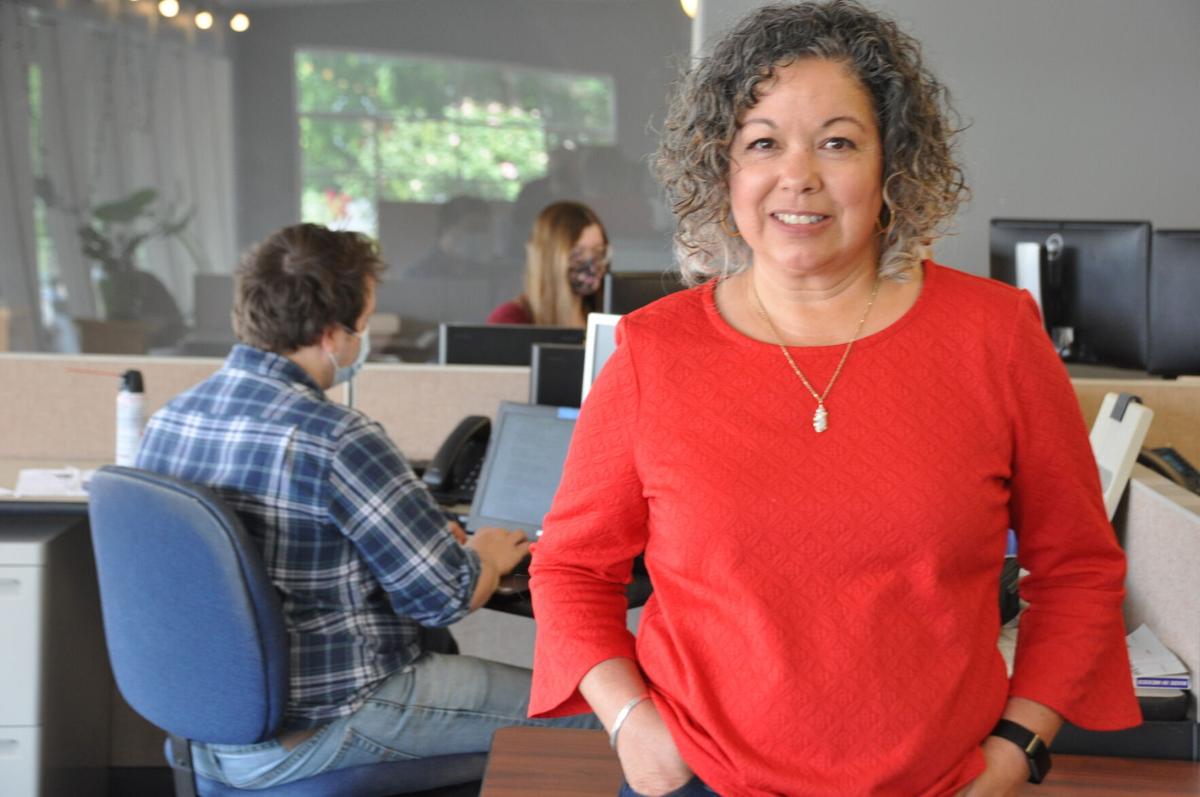 Publisher Chelsea Marr bought and combined the newspapers in Hood River, The Dalles and White Salmon when the previous owner announced it would close them permanently due to a loss of advertising revenue caused by COVID-19 shutdowns. 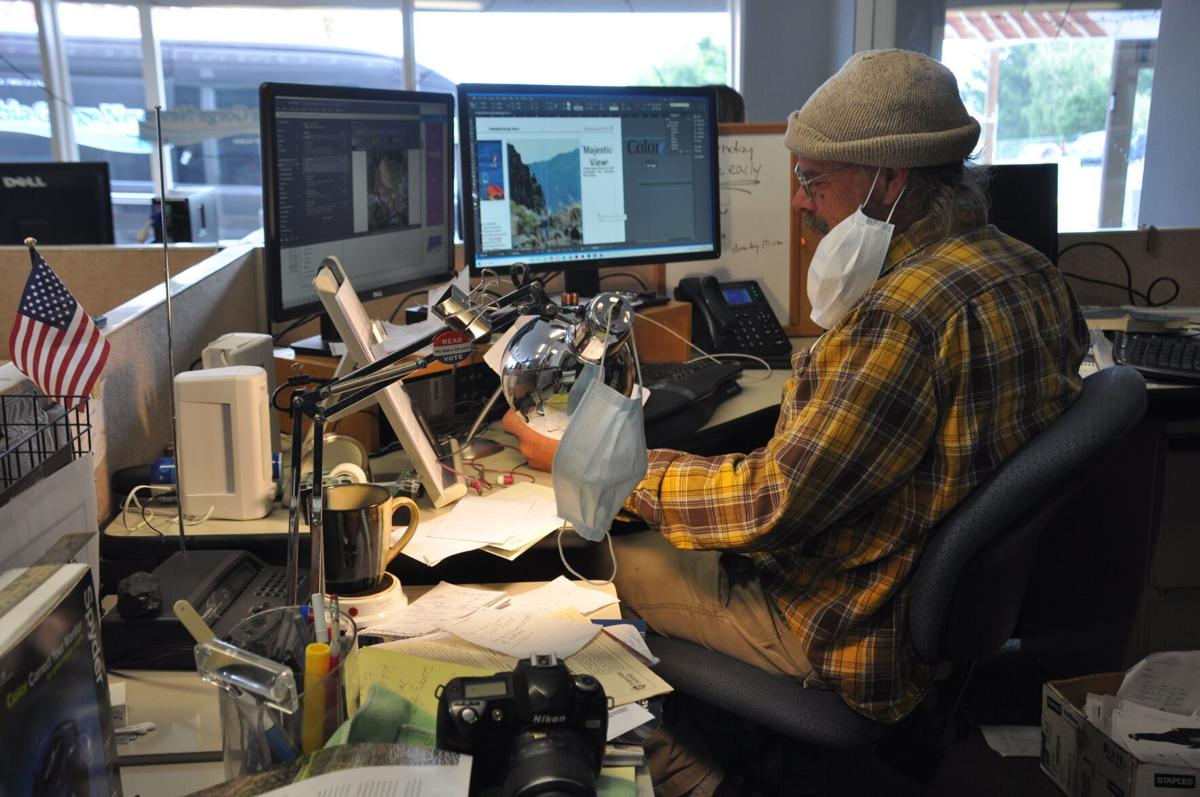 Editor Mark Gibson builds pages that will be printed the following day in the weekly Columbia Gorge News. The year-old publication represents a pandemic-caused restructuring of what were previously three separate papers. 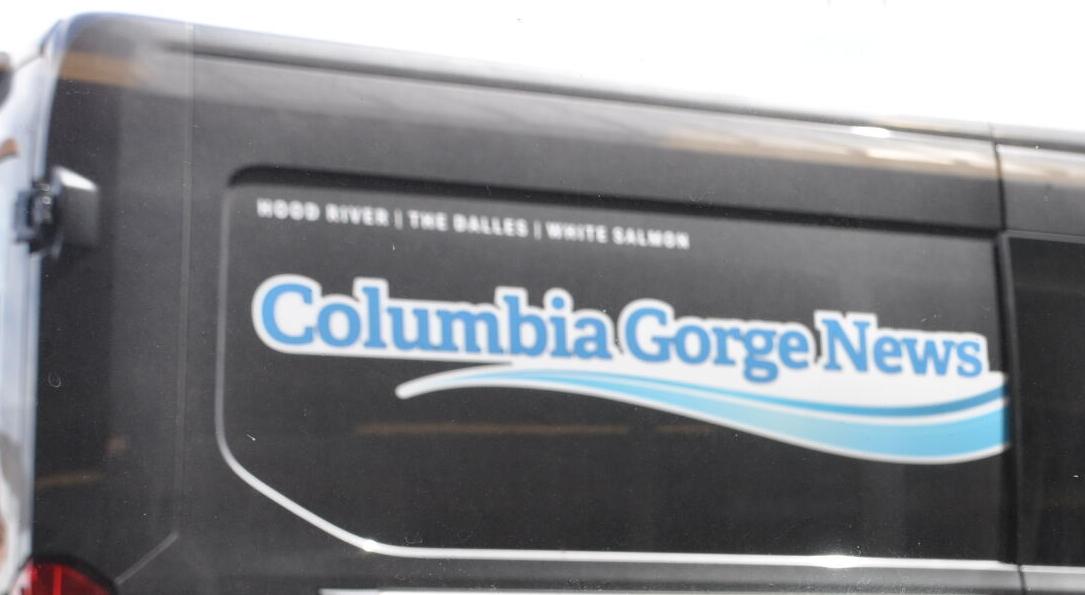 With its emphasis on local news in a distinct geographic region, owner and publisher Chelsea Marr is optimistic the Columbia Gorge News will find favor with readers and advertisers. 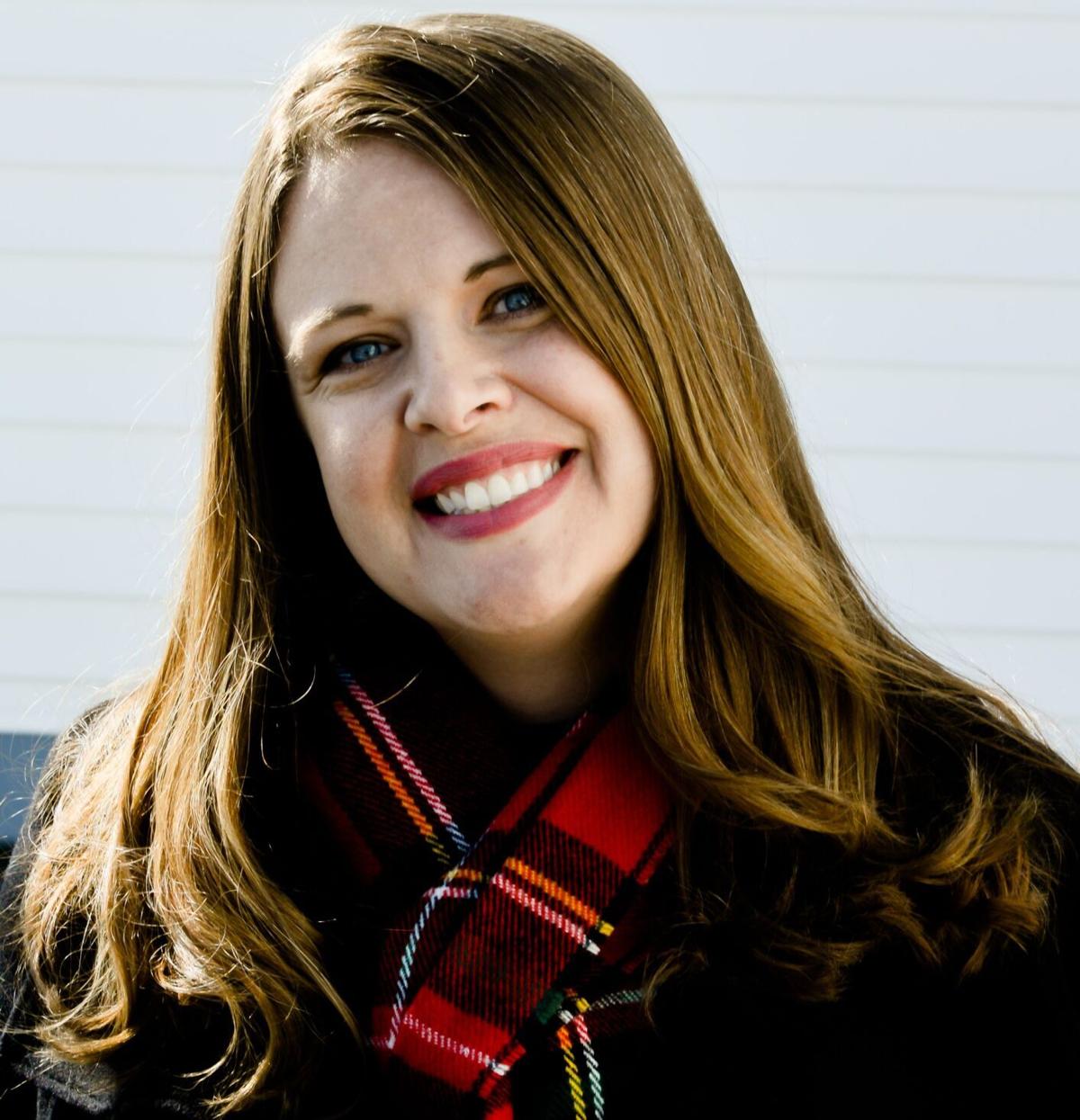 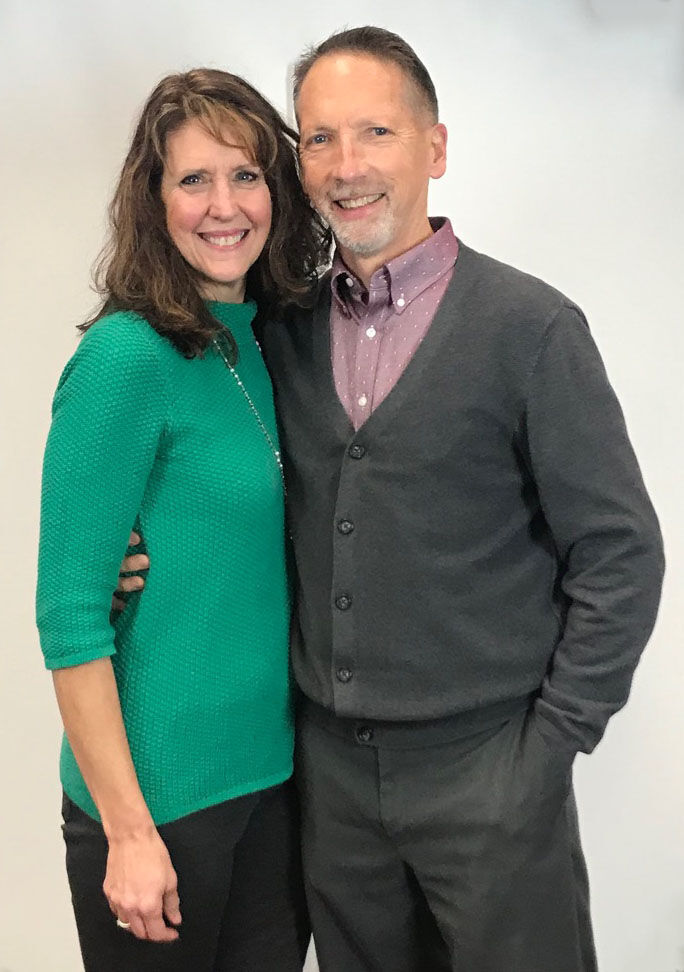 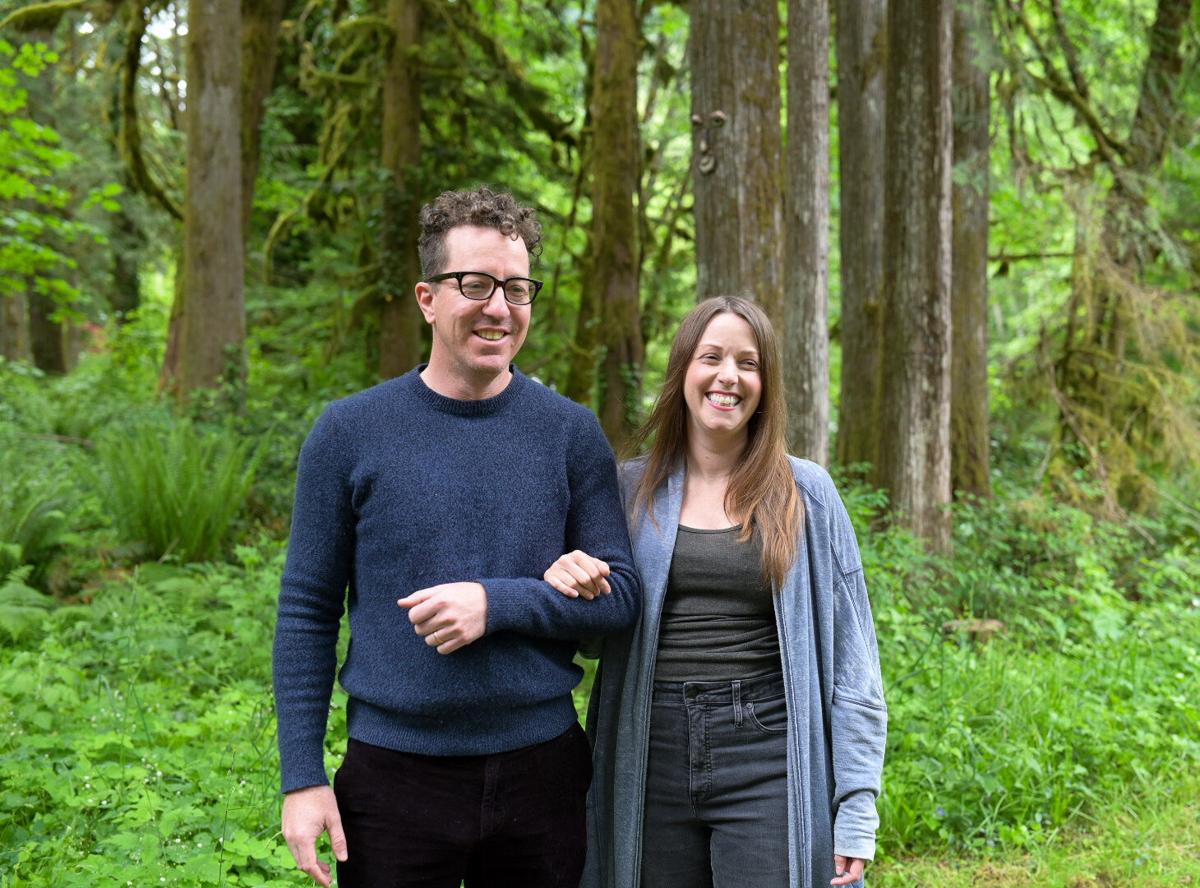 Stephen and Renee Allen bought the Condon Times-Journal in the spring of 2020.

Small town journalism may be a calling but it’s a business, too, and newspapers live with the same economic forces that often dog enterprise in rural Oregon.

Spotty access to markets and money, outdated technology and infrastructure, the detachment caused by distance from metro areas and a thin population base are everyday realities. Everything has a cost.

Then came 2020’s Covid-19 pandemic. Businesses closed and advertising revenue, which is still every publication’s lifeblood, dropped off the cliff.

In the Columbia River Gorge, Eagle Newspapers decided to pull the plug on the Hood River News, The Dalles Chronicle and the White Salmon Enterprise.

Eagle Newspapers has deep Oregon journalism roots that run back to the 1930s and founder Elmo Smith, who later was elected governor, and his son, Denny Smith, a five-term U.S. congressman. Eagle had tried for some time to sell the papers, but couldn’t find a buyer.

On March 25, 2020, the company notified Chelsea Marr, its publisher in Hood River and The Dalles, that the papers would close. Everyone would be unemployed effective six days later.

“They said Covid was killing us,” Marr said. “Advertising had dwindled down to nothing. Businesses were shuttering all around us.”

Eagle asked Marr if she wanted to buy the papers.

What happened next, and local news work-arounds that adapted or popped up elsewhere in Oregon, provides a glimpse of Oregon journalism’s future that is a mix of puzzle and promise.

A bit of context is in order. There’s no question it’s been a rough stretch for traditional newspapers. About 2,100 newspapers — one-fourth of the U.S. total — have closed since 2004, according to a 2020 report by the Hussman School of Journalism at the University of North Carolina. Newspaper journalist jobs dropped by half in 10 years.

“In only two decades, technological and economic assaults have destroyed the for-profit business model that sustained local journalism in this country for two centuries,” the report said.

The Internet was the first goon at the gate. Significant clumps of classified and other advertising money jumped on-line from print, social media made everyone an instant reporter, photographer and commentator, and website “page views” replaced paid subscriptions as a measuring stick of impact. News of the school board elections or Main Street potholes wilted in the rants of national politics. And for the most part, Internet “content” was free.

The 2008 recession and its aftermath had already hammered the newspaper business. Newspaper staffs shrunk as papers laid off thousands of reporters, photographers and editors — most of them older, higher up the salary scale and frankly more likely to tap a company’s medical care insurance program. Bigger papers cut staff, closed suburban bureaus and reduced statewide coverage, becoming “ghost newspapers” that are a shell of what they used to be. Smaller papers dried up completely.

Then Covid-19 hit. And while papers don’t necessarily rely on customers at the counter, many of their advertisers do. Tourism in rural Oregon dropped to a trickle beyond activities like hiking or biking that people could do in relative isolation, then go home. Many recreation-related businesses, restaurants, motels and shops closed or reduced operations. Communities canceled annual festivals, parks closed and schools lost graduation ceremonies and sports in addition to in-person classes.

Advertising revenue at Oregon’s 90 newspapers nosedived. How much is unclear at this point, said Laurie Hieb, executive director of the Oregon Newspaper Publishers Association.

“It was so dramatic and happened so quickly, I don’t know that any numbers you took would be accurate even a month later,” Hieb said.

Nationally, the closures, consolidations and rollbacks resulted in “news deserts,” meaning areas that have little or no coverage of local news.

Chelsea Marr didn’t want that to happen in the Columbia River Gorge. She’d been with Eagle Newspapers 25 years, beginning in ad sales and rising to publisher of the Hood River News and The Dalles Chronicle.

The company offered to sell her those papers and the White Salmon Enterprise across the Columbia in Washington. Given what was immediately at stake, Eagle offered what Marr describes as a “very sweet deal.”

Marr declined to provide details of the sale, but said Eagle “wanted it to go to somebody who had been with them.”

“The cost was something I felt I could roll the dice on,” she said. “I’ve been a quarter-century in this business...to have it go away and find a different career was sad. People forget how passionate newspaper people are; there’s a lot of passion in a newsroom, they really are servants to the community.”

Marr scrambled to reassemble what she’d bought. She combined the papers into a single weekly print edition, The Columbia Gorge News. Online, columbiagorgenews.com provides regional coverage. The ONPA provided critical accounting help to untangle the new entity’s financial affairs from Eagle’s. Employees primarily worked from home, with reporters covering government meetings via Zoom. She continued The Gorge magazine, a print product targeting visitors to the region. Groups such as the Hood River Rotary, recognizing the role a local paper plays in civic life, cheered her on.

A year later, Marr said it’s working. She planned this spring to hire two more reporters, and was looking to give part-time ad sales people more hours. The print editions grew to more than 30 pages, big for a weekly.

In Condon, the county seat of Gilliam County in north central Oregon, Steve and Renee Allen scrambled in spring 2020 to stabilize the weekly Condon Times-Journal, which they’d bought the summer before. Neither has a journalism background — he worked in non-profits and she does graphic design — and they were still learning the business when Covid turned everything upside down.

“People still look forward to the paper,” Steve Allen said. “If they don’t get it, or we don’t get something right, we definitely hear about it.”

“It’s the community gathering point in a lot of ways,” Farrar-Cambell said from the county seat in Condon. Gilliam retains a county court form of government, with an elected judge and two other commissioners.

Farrar-Campbell grew up in Condon, part of a fifth-generation Gilliam County family but spent years as a Congressional press secretary in Washington, D.C., before coming home. National news sources — whether at the MSNBC end of the spectrum or at the Fox News end — are baldly partisan, she said.

“So the little local papers are the place where I would say there’s still an appreciation for the same basic set of facts,” she said. “That’s where you go.”

Steve Allen said his and his wife’s first months of owning the Times-Journal were “intense” as they learned the business and then dealt with covering the Covid impact as a news story and rolling with its financial hit to the weekly paper as advertising dropped.

It helped that the Times-Journal is the paper of record for Gilliam, Wheeler and Sherman counties, and carried the paid, legal advertising notices that local governments are required to publish.

Community support has been crucial, Allen said. The paper’s readers prefer print over digital news, and are deeply interested in schools and other local affairs. Big money flows through the area, people “don’t always do the right thing,” and reporting the news accurately is a “huge responsibility,” Allen said.

“I view it as essential to a functioning democracy — having a press that is free and independent and engaged in the community,” Farrar-Campbell said. “A lot of that falls to the Times-Journal in keeping (residents) up to speed.”

“We are everything from being a cheerleader, to promoting small business, to separating fact and fiction,” Allen said. “We see it as our duty to do the work, but the community is sustaining us.”

At the New Era newspaper in Sweet Home, a Linn County town of about 9,600, owners Scott and Miriam Swanson cut costs as businesses reduced ad spending or closed altogether.

Miriam Swanson, who handles the financial end of things, said the paper was able to complete major projects before Covid hit, however, and also finished paying off their 2005 purchase of the paper. The latter gave them breathing room, she said. They applied twice for government payroll protection, and it helped that 2020 was an election year and a dozen candidates bought campaign ads.

The couple also print directories and business guides, plus the Lebanon Local, a monthly paper they hope to expand to a weekly.

“Our numbers are pretty good this year,” Miriam Swanson said. “Our paper is well regarded. The business community is small but stepped up to the plate and supported the projects we do. We have no one else who reports on our community.”

While covering and photographing calamities such as fires or wrecks, he said, “I was just getting reamed by people,” who called him names. It happened four or five times in a row, he said. Another time, a driver injured in a two-car crash ranted at him for saying in print that the vehicles “collided,” although that was the exact language of a police report.

“It seems like everyone’s more angry, and ready to get angry,” Swanson said.

Swanson said he began telling his reporters to wear press ID when covering events, so people wouldn’t mistake them for random Internet trolls or dirtbags.

Other issues popped up, such as the Zoom link failing when the school board met. Government meetings are public, but with Covid preventing reporters from attending in person, the technical glitch essentially violated that provision.

When the New Era had an opening for a reporter, some applicants wanted to do the job remotely rather than move to Sweet Home.

“You can’t do this job in Portland,” Swanson said. “Not this job.”

The pullback of larger newspapers and shutdown of smaller ones, resulting in Oregon’s small town “new deserts,” caused some retired journalists to jump back into the game and start digital-only news sites.