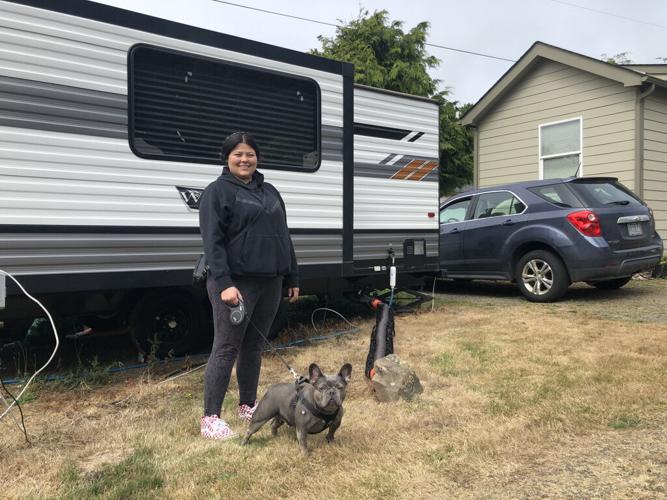 Christina Contreras stands outside her RV with her dog. Contreras has been living at Fogarty Creek for over a year with her boyfriend. 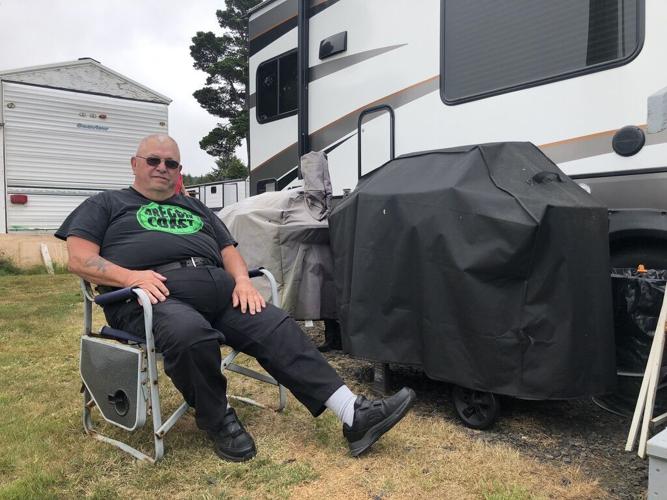 Ralph Hooper, one of the managers of Fogarty Creek RV Park, sits outside his RV. Hooper has been living and working at Fogarty Creek for the last five years. 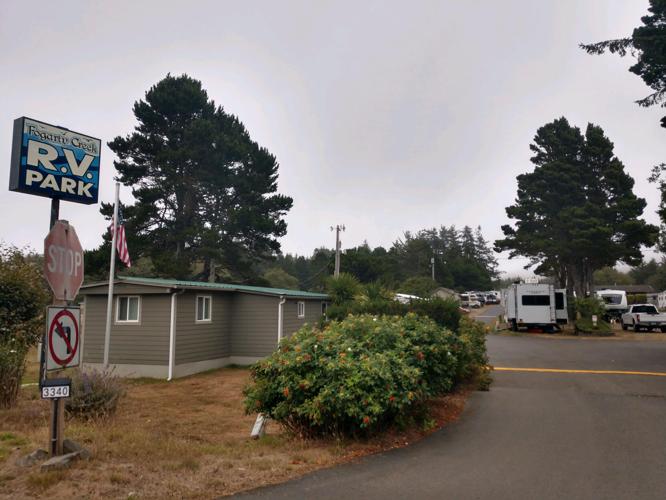 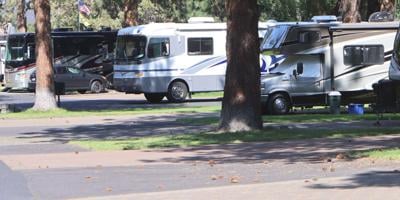 DEPOE BAY — Ralph Hooper sets out his lawn chairs in front of his RV. His dog, Toby, watches him from inside his 27-foot long motorhome. Hooper has been living in RVs for the last 14 years and has no plans of returning to live in a brick-and-mortar home.

“I have the mobility to move if I don't like the area,” said Hooper. “And I own it, I’m not giving money to somebody else and there’s less maintenance.”

Hooper enjoys the simple life that living in the RV provides. He is one of the two managers of Fogarty Creek RV Park in Depoe Bay and has lived at the park for the last five years.

Situated along Highway 101, Fogarty Creek RV Park is one of the very few long-term only RV parks along the Oregon coastline.

Since the COVID-19 pandemic, an increasing number of people throughout Oregon have moved into RVs long term for a variety of reasons. Unlike Hooper, many of the other residents at Fogarty Creek don’t desire to live in their RVs indefinitely. But for now, living in their RVs has become their most practical — and in most cases their only — option.

Garilee DeBoard has been living on the Oregon coast at Fogarty Creek with her husband for the last two years.

The DeBoards moved to the coast during COVID, shortly after they became empty nesters. They felt restless in their small town in Idaho and decided it was time to move somewhere new.

“We sold our house and kind of went on a hope and a prayer that we would find a place,” said DeBoard. “But we ended up staying in hotels because housing was just so unavailable. So we bought the RV and we were just going to stay in it until we found something.”

That was two years ago. Today, the DeBoards are still living in their RV.

“Eventually I'd like to buy some property and build a home but for right now, this is really our only option. There’s just no housing rentals here,” said DeBoard.

Fogarty Creek RV Park only became an exclusively long term park less than a year ago. The majority of RV parks on the coast only offer spots for up to six weeks, which can be a massive issue for many residents who are attempting to live in their mobile homes long term.

Donna Thorpe, who has been living at Fogarty Creek for the last three years, believes that more RV parks need to offer long term residency as an option.

In fact, when Thorpe and her husband first moved to Fogarty Creek three years ago, there wasn’t even a waitlist. Today, there are over 30 people on the waitlist to get a permanent spot at Fogarty Creek.

“And it depends on the size of the rig and the space they want,” said Theresa Lee, the other manager at Fogarty Creek. “Some people might want a back-in spot against the forest, well if that’s the case, they’re going to be waiting years.”

Other RV parks along the coast are facing similar challenges.

The Port of Newport RV Park and Marina has been overbooked since the spring.

“There is no place for us to expand,” said Paula Miranda, the general manager of the Port. “And to be quite frank, I know housing is an issue here. All over the west, definitely in Oregon, and most definitely here at the coast. But the mission of the Port is not necessarily to focus on housing.”

The planners of Lincoln County echo a similar sentiment.

“I will be excited about finding some remedies to this obvious problem,” said Onno Husing, the director of the planning and development department of Lincoln County. “Because people living in RVs long term is just a manifestation of this much larger housing affordability phenomenon.”

According to Husing, the solution to the affordable housing crisis is complex, but ultimately lies with Oregon’s cities.

“The remedy is that we support our cities because our small cities don't have the capacity to figure all this out,” he said. “We have to help our coastal cities and other cities in Oregon with grants and some major infrastructure pieces to solve this issue. Doing something about this takes money and guts and leadership.”

Along with solving the housing crisis at large, John O’Leary, the senior planner of Lincoln County says building more RV parks is not a simple solution.

“It’s not easy,” said O’Leary. “And it’s expensive and the problem with pushing them into the cities is the cities probably want to push them out into the unincorporated areas for different reasons. We want them in cities because that's where land use system engineers are trying to preserve farm and forest lands for farm and forest activities.”

Despite the uncertain outlook for low barrier housing opportunities on Oregon’s coasts, DeBoard and many of the other long-term residents of Fogarty Creek RV Park are making the most of RV living.

“I think a lot of people don't want to live to work anymore,” said DeBoard. “Living in a RV isn’t just affordable. It gives you the opportunity to work to live instead of living to work. And as an empty nester, that's a gift I hope that I can teach my children now while they're still in their early 20s. To make sure that they learn to find that balance.”

Molly Cruse earned her master's degree from the University of Oregon, and served as a Snowden intern for the Capital Press.