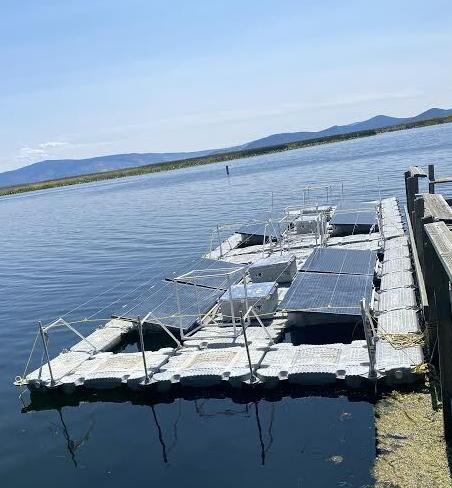 An artificial floating island equipped with aerators, powered by solar panels and batteries. 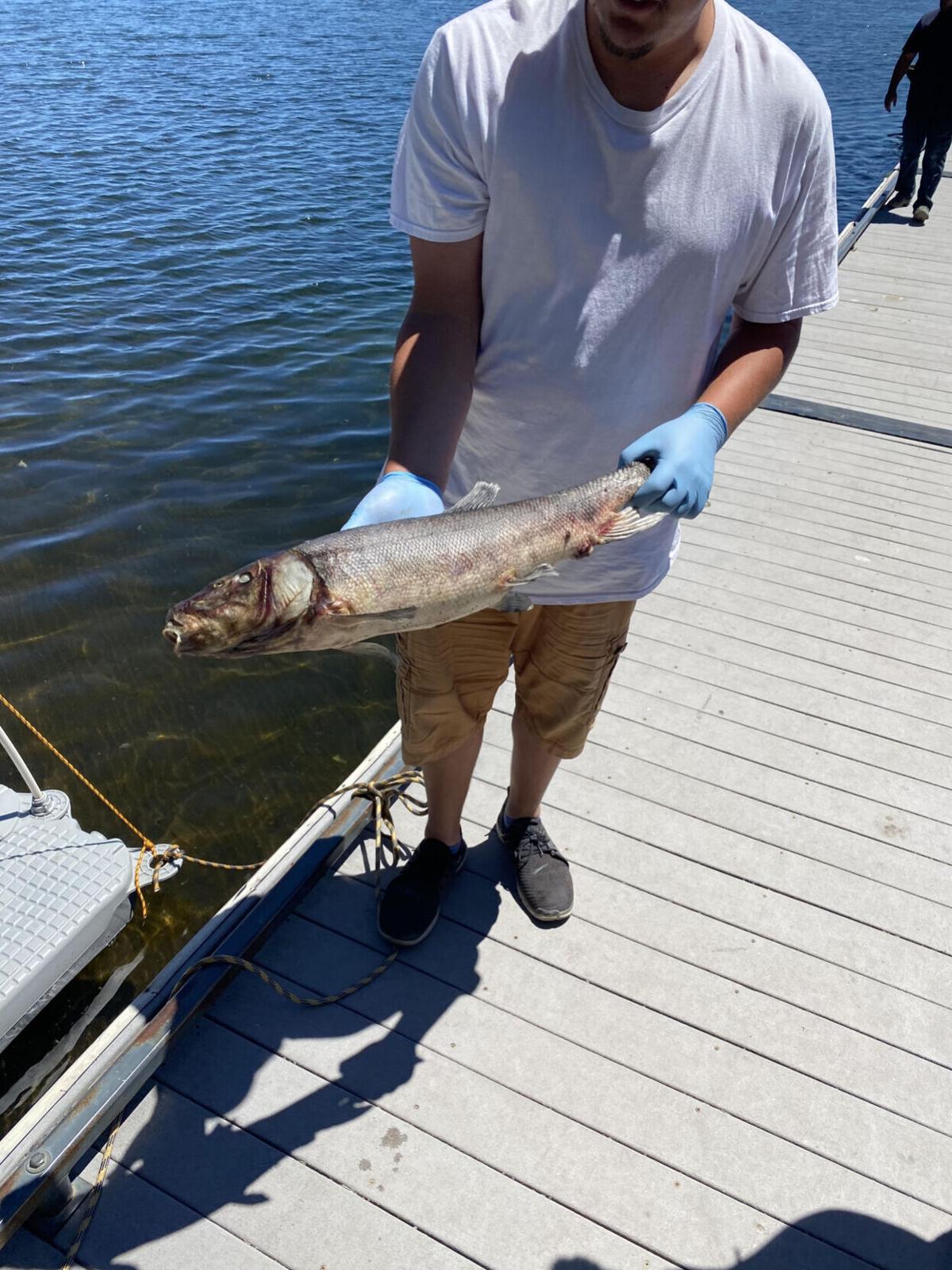 An artificial floating island equipped with aerators, powered by solar panels and batteries.

Oregon Institute of Technology is coordinating with the Klamath Tribes to try to save endangered Lost River and shortnose suckers while using energy efficiencies to power the process.

Through a partnership with the Klamath Tribes, the school’s Renewable Energy Engineering program has placed two floating “islands” equipped with solar-powered aerators on Upper Klamath Lake, in hopes of generating increased dissolved oxygen in the lake to help the species thrive.

REE graduate student Juan Villarreal, a 27-year-old native of Bakersfield, Calif., has been working on the project since it started in August 2019.

Juvenile suckers are not making it to adulthood, and the project is one of multiple attempts at finding a way to solve that.

“We’ve got these fish out on the lake, they’re very important to the Klamath Tribes,” said Mason Terry, director of the Oregon Renewable Energy Center at Oregon Tech and associate professor of the Electrical Engineering and Renewable Engineering (EERE) programs.

“They’re in threat of extinction so what we’re trying to do is just like in your home fish tank with your bubbler in that tank, we’re trying to make more oxygen for them to breathe, essentially so they can live — and it’s all powered by solar.”

Villarreal is among a small group of students selected to take part in the hands-on project to find solutions for the suckers, known to the Klamath Tribe as C'waam and Koptu.

He described the first year of the project in 2019 as a lot of “trial and error.” Two islands were deployed onto the lake, each island with solar panels to power them as well as batteries, aerators and charge controllers to direct the solar panels.

“Any excess energy that wasn’t used could charge the battery so it could run overnight,” he said.

After the first year, Villarreal said, the group noticed birds liked to land on the floating islands in the middle of lake.

“A lot of them got covered with the fecal matter from the pelicans,” Villarreal said.

This year, the group designed netting to deter birds from landing on the solar panels.

“Next summer, we’ll kind of go from there, seeing if there’s anything to improve, or if we want to continue with the same model and produce more islands,” he added.

He and others working on it hope their efforts will have a lasting impact.

“I never thought going into college I would work on a big project to save an endangered species,” Villarreal said.

Tribal members had planned to take measurements and collect data on the lake this summer following the first and second phases of the project, to see how the project was progressing. That all changed with the onset of COVID-19 and then wildfires in September.

After COVID-19 hit the local area, wildfires emerged in Chiloquin in September, delaying some aspects of the project, but not the mission of moving forward in 2021.

“The project is a work in progress as OIT, with the logistical support of the Klamath Tribes, develop a system that is reliable, functional, and that delivers oxygenated water to the habitat endangered suckers prefer to inhabit,” said Alex Gonyaw, senior fish biologist for the Klamath Tribes, in an email. “The rafts will be tested for durability this winter and refurbished in the spring.

“The overall effort will determine the feasibility of creating islands of improved water quality in areas of the lake that sucker prefer during summer and fall.”

Despite obstacles and delays in 2020, Terry emphasized the project will continue its mission in 2021.

“We have a three-year permit and then it’s also renewable indefinitely,” Terry said.

Terry plans to continue writing grant proposals for the project, in order to expand its reach.

“I just hope that it keeps expanding,” Terry said. “If we see the positive results, we’re just going to keep expanding it, either one large area or multiple areas around the lake, where the juvenile suckers tend to conglomerate.

“Hopefully it does prove that this is a possible solution, and we can mitigate their extinction,” he added.