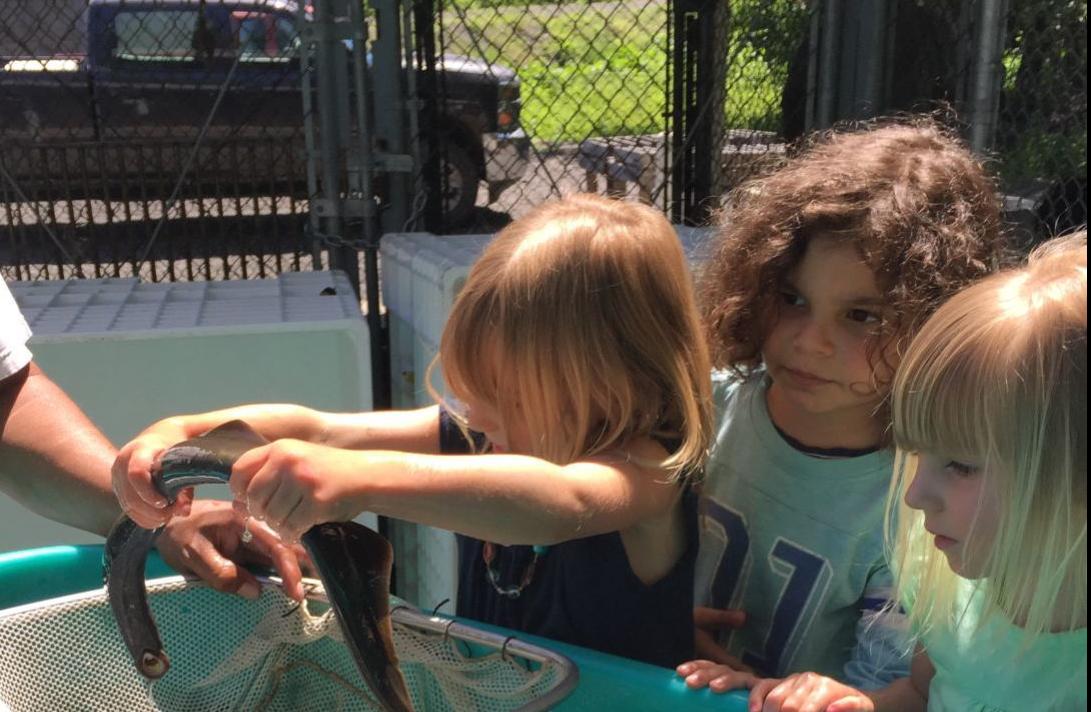 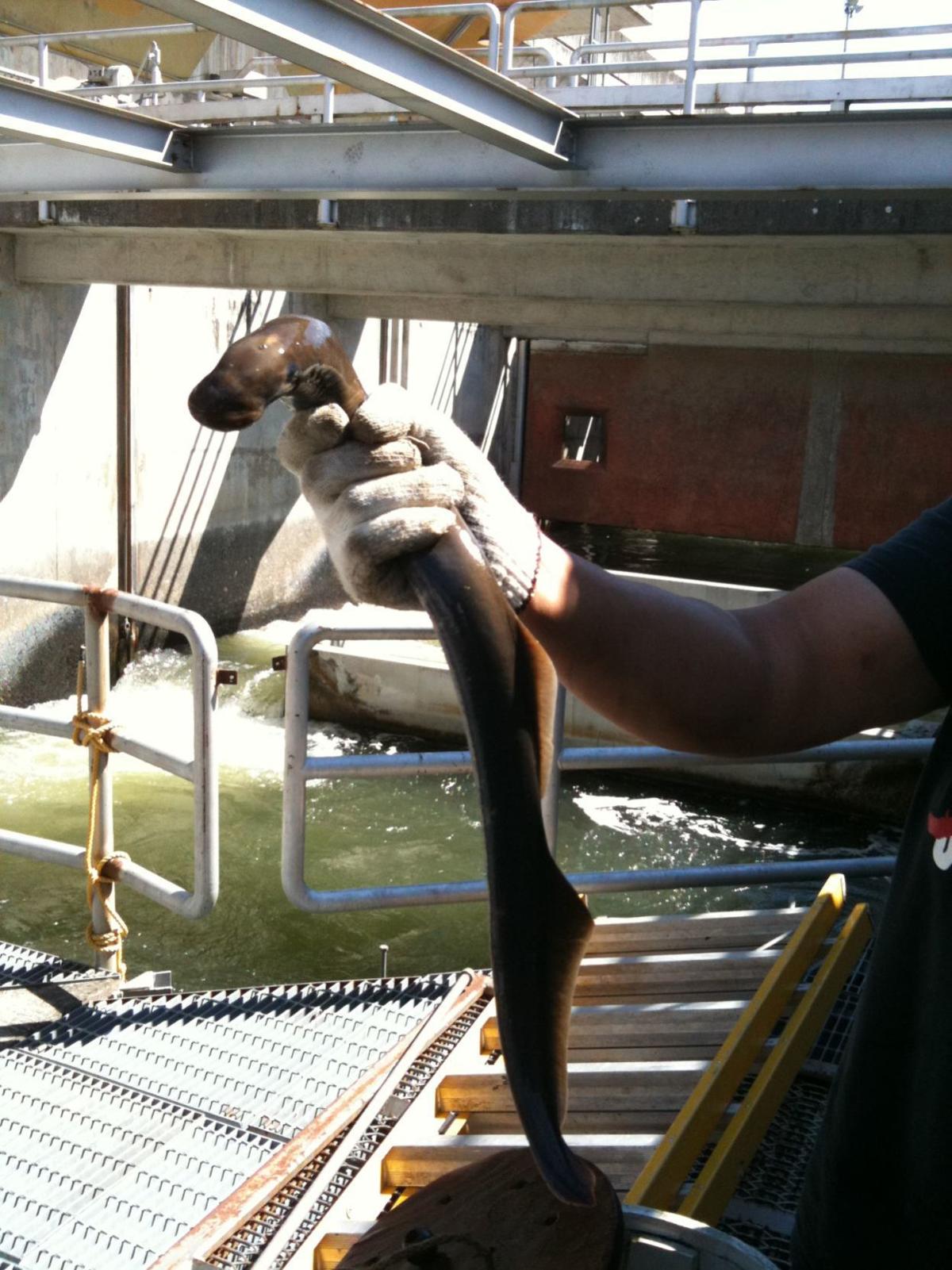 Lampreys are among the First Foods historically eaten by tribes in the Northwest. 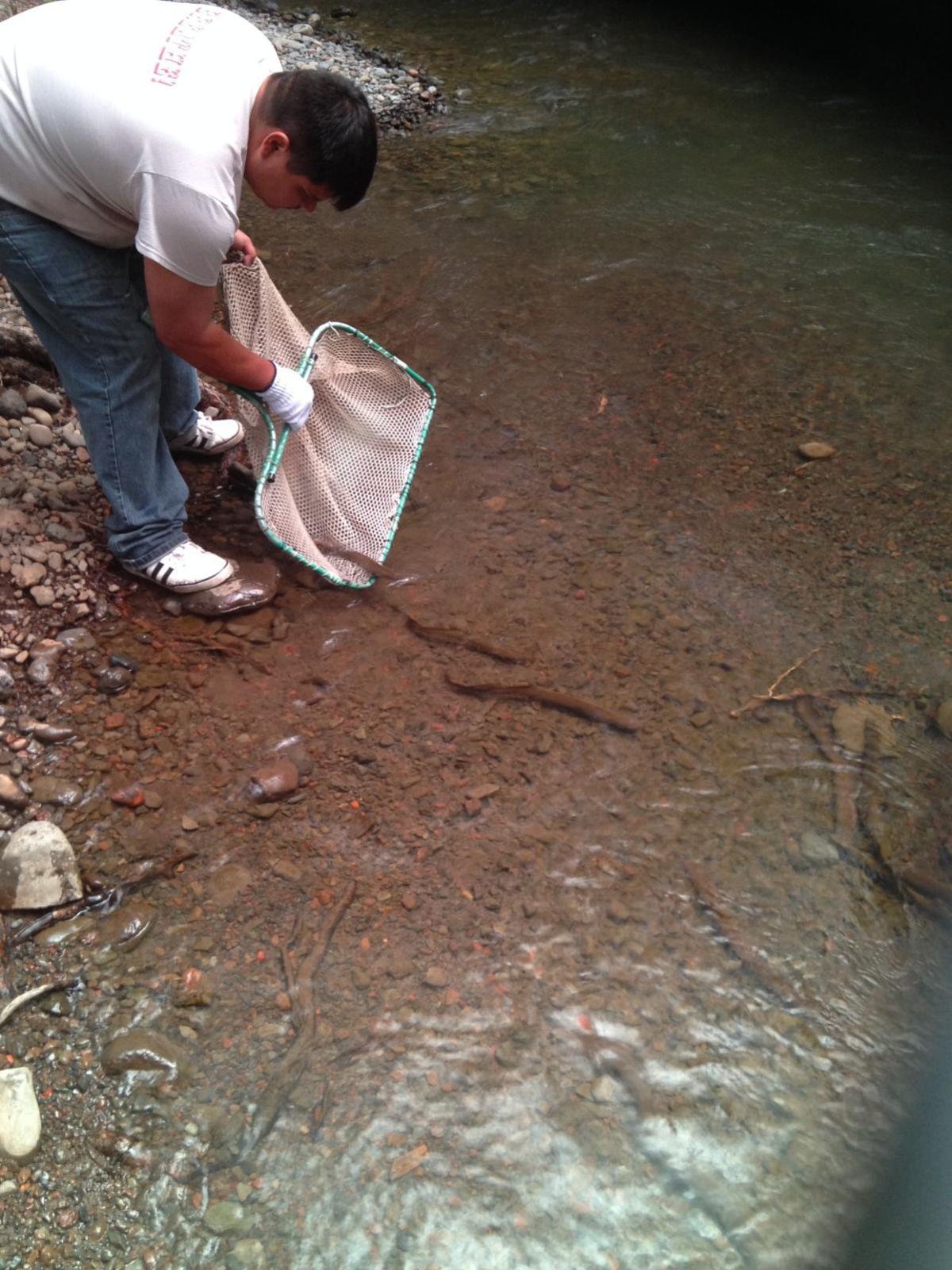 Lamprey are released into the Umatilla River.

Lampreys are among the First Foods historically eaten by tribes in the Northwest.

Lamprey are released into the Umatilla River.

Aaron Jackson, lamprey project lead, is clearly a passionate, knowledgeable, and utterly patient man. He has to be — he has dedicated his working life to a sacred and maligned, complex and long-living species with the deck stacked against its survival.

Pacific lamprey has an odd lifecycle and a familiar, salmon-like story of decline. It is a First Food for Columbia Basin tribes that was poisoned as a parasitic “trash fish.” Lamprey existed before the dinosaurs and with any luck, will exist beyond the 21st century. As fish biologist, a member of the Confederated Tribes of the Umatilla Indian Reservation (CTUIR), Jackson has his work cut out for him.

In rural northeast Oregon it is said that lamprey were so numerous, they would clog irrigation intakes in the Umatilla River. But that’s now a “fish story.” That was in a time before the dams, habitat loss, contamination, dredging, and deliberate poisoning of the 20th century. Lamprey have existed in the Columbia Basin for 400 to 500 million years, but it has taken less than 100 years to nearly wipe them out. And with their loss, a generation of tribal members nearly lost a part of their subsistence and culture.

Lamprey (also called eels) are long, anadromous, parasitic fish that start their life cycle in freshwater streams. Juvenile lamprey spend years filter feeding in freshwater and estuaries before heading to the ocean to find a suitable host. They use their raked, sucker mouth parts to feed on hake, pollock, salmon, steelhead and whales in the ocean as adults.

“Lamprey are parasites, but they don’t kill off their prey — that wouldn’t work,” Jackson said. “In fact, because their prey have declined, they are declining as well.”

Once lamprey are sexually mature, they begin migrating up freshwater streams around the Pacific. While they are anadromous, they do not imprint and return to their native streams like salmon. They hitch rides on their hosts and can wind up far from home when it is time to reproduce.

“Lamprey produced in the Umatilla could return to anywhere in their range — from the Hokkaido, Japan to the Fraser River in Canada to Baja, Mexico,” Jackson said.

Like salmon, lamprey migrating through the Columbia River Basin face challenges around dams, especially because dam passage are designed for salmonids. Visitors to the Bonneville Dam fish ladder may have seen numerous wriggling eels sucked to the window, but they are struggling.

“Lamprey are stuck at Bonneville Dam, which is why they look plentiful,” Jackson said. “Some move quickly, others take a long time, half don’t make it.”

Salmon passage doesn’t work for lamprey because their mechanism for movement is much different than salmon. Lamprey have evolved to use their sucker mouth parts to laboriously “climb” up rocks and waterfalls.

“We see a 50 percent loss of adult lamprey at each dam on the Columbia and roughly that same number between reservoirs,” Jackson said. “Lamprey juveniles can go through the turbines, but they can be impinged on screens. These structures were built for salmon, not lamprey.”

In addition to dam passage, lamprey have declined in the last 100 years due to habitat loss, juvenile predation, loss of prey, water and sediment contamination, dredging, and even intentional poisoning.

In 1967 and 1974 fish managers dripped Rotenone — a chemical found in the roots of certain plants, known to be toxic to fish — along 80 miles of the Umatilla River to intentionally kill lamprey, which were considered “trash fish” despite the fact they are a major food source for the Tribes. And yet, these ancient fish persist and the efforts of the Tribes, the Bonneville Power Administration and other agencies are returning fish to the Umatilla River.

Lamprey are not federally listed as an Endangered Species, and Jackson looks at restoration efforts as an opportunity to forego traditional listing and the ire that comes with it. “Instead, we can proactively improve things through translocation of adults, habitat and passage improvement, and artificial propagation at hatcheries,” he said.

The process of restoration has been long and unsure. Since lamprey can be 15 or more years old when they return to northwest rivers, restoration efforts do not result in immediate improvement.

“I’ve worked on this project since 1996, hoping and praying that what we were doing would work,” Jackson said.

“We feel the things we’re doing throughout their lifecycle are starting to show results.”

In 2018, the Tribes had a ceremonial harvest of eels to celebrate the return of the lamprey to the Umatilla River. In 2019, the first lamprey subsistence fishery was open on the river in 40 years.

“That was very rewarding as a biologist, as a tribal member, and as a human being.”

The return of eels to the Umatilla Basin means the return of a First Food to the Tribes. Lamprey are a boneless, oily fish with 10 times the caloric value of salmon, which made them a critical food in lean times.

“Cooked on an open flame, one lamprey can fill a coffee cup with oil,” Jackson said. “The oil makes lamprey hard to preserve for long, so they are best eaten fresh.”

Jackson remembers his grandmother preparing lamprey with mayonnaise on toast, but now he prefers smoked lamprey pate on a Ritz cracker — “it’s to die for!” he said.

The loss of eels from the Umatilla River meant lamprey was nearly lost from the tribes’ culture for a generation. Jackson didn’t grow up watching lamprey climb waterfalls or swimming in the Umatilla, but now his five daughters know their importance culturally, ecologically, and as a First Food.

“My daughters have the opportunity to hold these fish. That was something I couldn’t do as a kid on the reservation because they simply weren’t around.”

Jackson also wants rural and urban people to see the Tribe’s commitment to the lamprey and their restoration. “We have deep, passionate concerns. We want these species to exist forever because they are important and they belong here.”

Sorry, there are no recent results for popular images.