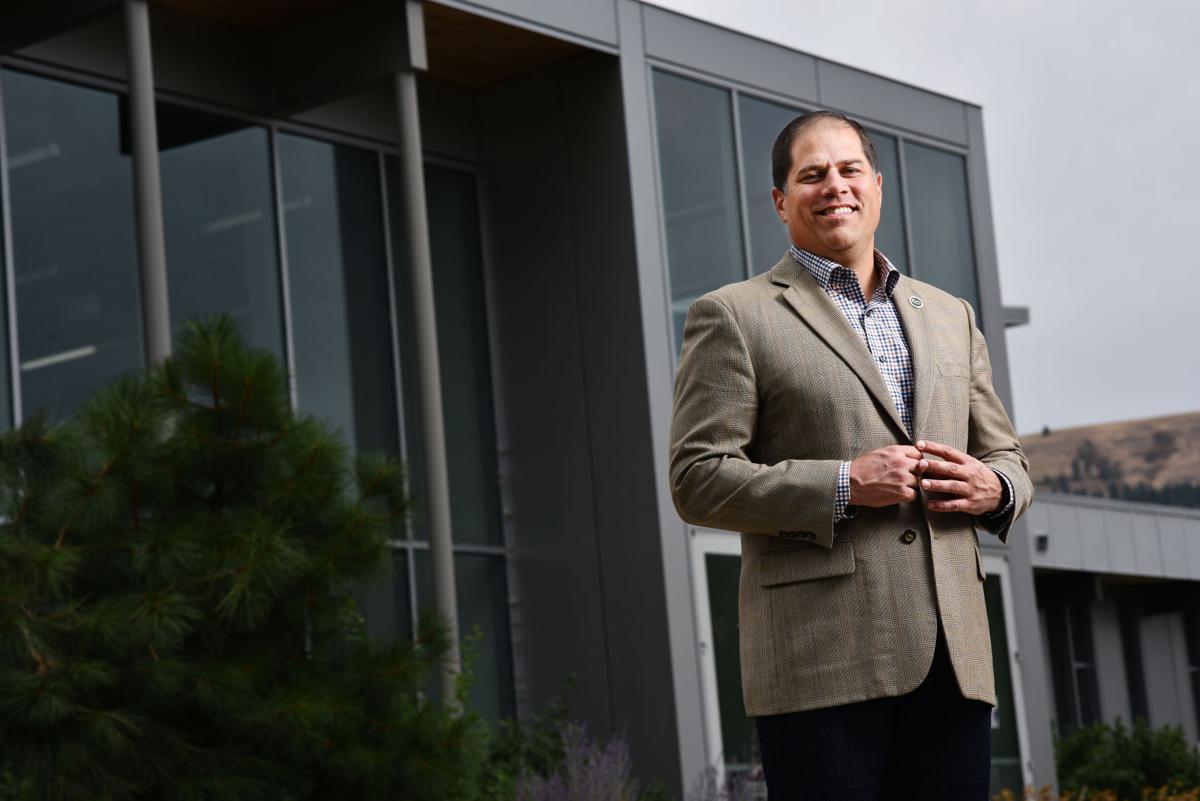 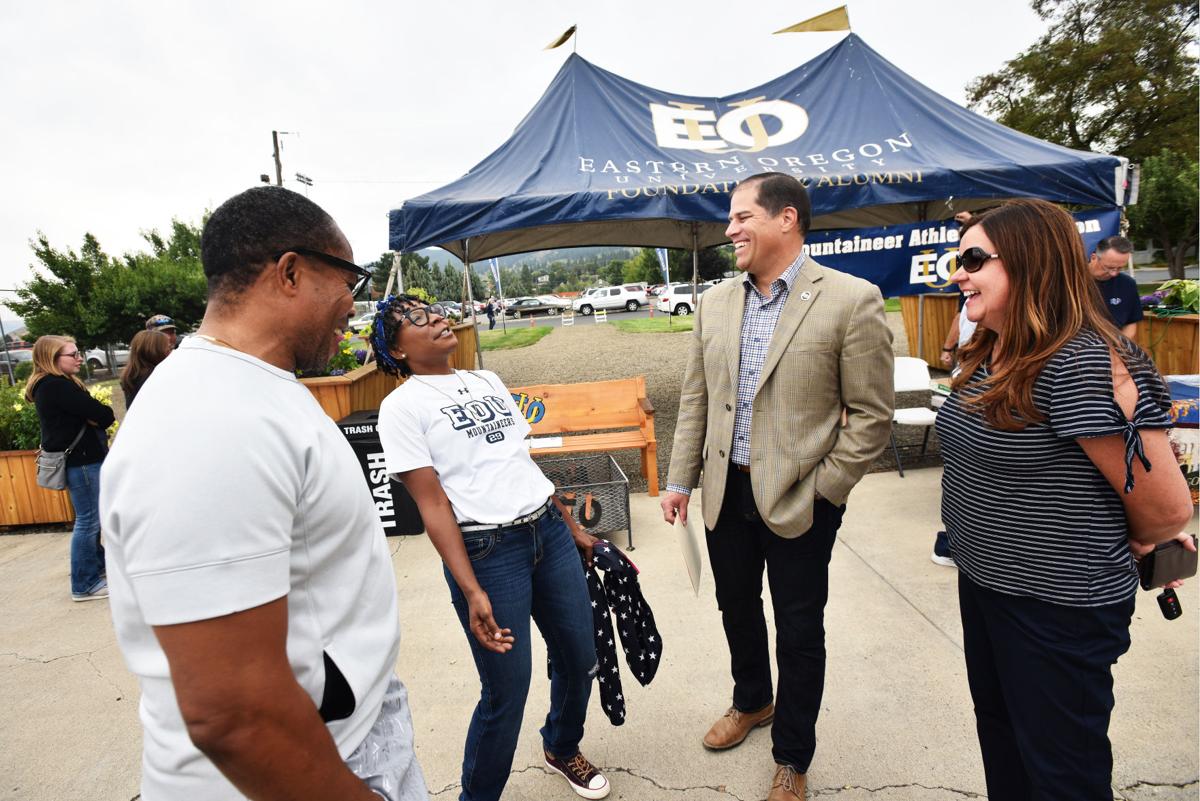 Peter and Skky Obenwa, of La Grande, talk with EOU president Tom Insko and his wife, Emily, in the Tailgate Zone before the start of the Mounties’ football season opener against The College of Idaho on Saturday, Aug. 25, 2018, in La Grande.

Peter and Skky Obenwa, of La Grande, talk with EOU president Tom Insko and his wife, Emily, in the Tailgate Zone before the start of the Mounties’ football season opener against The College of Idaho on Saturday, Aug. 25, 2018, in La Grande.

Insko himself is a prime example of the kind of student and alum the university wants to produce. Raised in northern Union County, the Elgin High School graduate studied math and business economics, played basketball and was involved in student government at Eastern before becoming one of the region’s most recognized leaders.

Upon graduating from Eastern in 1994 Insko got his MBA at William & Mary in Virginia. He said one of the

reasons he wanted to go to a school of that caliber was to validate his prior education.

“Growing up in a small, rural community I felt like I had gotten a great education,” Insko said. “When I went to William & Mary and did very well I knew I had received a phenomenal education. That is why I am so passionate about what we do in rural communities and how it prepared me for the next step.”

Insko’s next step wasn’t the one he planned. It was 1996, the height of the high tech boom. With his eye on a job at Intel he received an unexpected offer.

“Out of the blue I got a call from Boise Cascade. I was asked if I was interested in going to work there. I told them no,” Insko said.

He said he worked for the wood products company as an undergrad,

but the wood products industry was in decline and had serious challenges — not the path he intended. It was his wife, Emily, who helped him see the advantages of the Boise Cascade position.

“Emily reminded me of the people I had met and the products the company made and asked me, ‘Can you see us raising our family in this community?’” Insko said. “So I chose Boise Cascade because it was the right place to me and it brought us right back to La Grande.”

Insko was with Boise Cascade for 20 years. As his career advanced he became involved with the university, serving on the university’s foundation board of directors and later as a trustee of Eastern’s governing board. He could see firsthand the financial troubles facing the university and the instability in its leadership.

An offer to serve as the university’s president led to another heart-to-heart with his wife.

“There were a number of things that got Emily and me sitting down and talking about making this transition. It wasn’t a career move in the monetary sense – it came back to the heart. We love Eastern Oregon and there is more to life than moving up the corporate ladder,” Insko said.

Insko said his first concern as president was Eastern’s identity. He said in the early 1990s under President Dave Gilbert the university was very much focused on its entanglement with the rural region, but over the past couple decades that identity became lost.

Insko and Tim Seydel, vice president for advancement, had a new vision toward serving rural students and economies.

“We are unapologetic about being the rural campus.” Insko said. “Our goals are to be the cultural education and economic driver of rural places.”

Eastern had organically become recognized as Oregon’s rural campus based on its location, but Seydel said discussions with Insko and legislators over the course of several years led to writing a bill explaining the reasons why the designation was appropriate.

“We were the first in the state to offer distance learning and we serve Oregon’s 12 most eastern counties as well as rural communities on the west side,” Seydel said.

Seydel and Inkso shared their draft bill with Reps. Greg Barreto and Greg Smith, as well as Sens. Bill Hansell and Cliff Bentz.

Barreto said he testified in front of the House of Representatives on the bill’s behalf.

“Part of the designation was to set the university up to make it unique from other universities and help with funding,” Barreto said. “It was a great idea and went through very easily.”

Bentz also testified in favor of the bill in the senate.

“Like other school districts and businesses in frontier Oregon, when we need funding, the rural designation helps present the position a little better,” Bentz said. “If you are going to have a designation with that singular focus it helps people see the value of big, open spaces.”

Before the designation the university was already focused on making education accessible and affordable to students around the West, but especially in Oregon with 11 outreach centers around the state — some located in community colleges while others partner with Education Service Districts.

At Ontario’s Treasure Valley Community College, Insko said they have what is called a “2+2” program that makes sure students who finish community college in two years can transfer all of their credits and finish at Eastern with a bachelor’s degree in just two more years.

Eastern and Blue Mountain Community College in Pendleton have dual enrollment allowing students to take classes at different institutions at the same time that count toward a degree.

“By providing the locations and working with rural communities we are making it affordable, the most significance access issue to education we have,” Insko said.

Eastern’s online courses are another way of making higher education easy to access for those who have barriers to a brick and mortar college experience.

“Eastern is the pioneer for the non-traditional and distance education,” Insko said.

“We meet people where they are and provide people that hand up, either online or on campus.”

To best prepare students for careers and provide the region’s employers with well-trained employees, Insko said the university formed the Rural Engage- ment and Vitality Center in partnership with Wallowa Resources. Through the center Eastern is facilitating and developing a talent pipeline for the region.

“We are providing unique experiences while working on real, deep experiential learning so when students graduate they have developed essential skills,” Insko said. “We want to be more intentional with how we work with potential employers early on.”