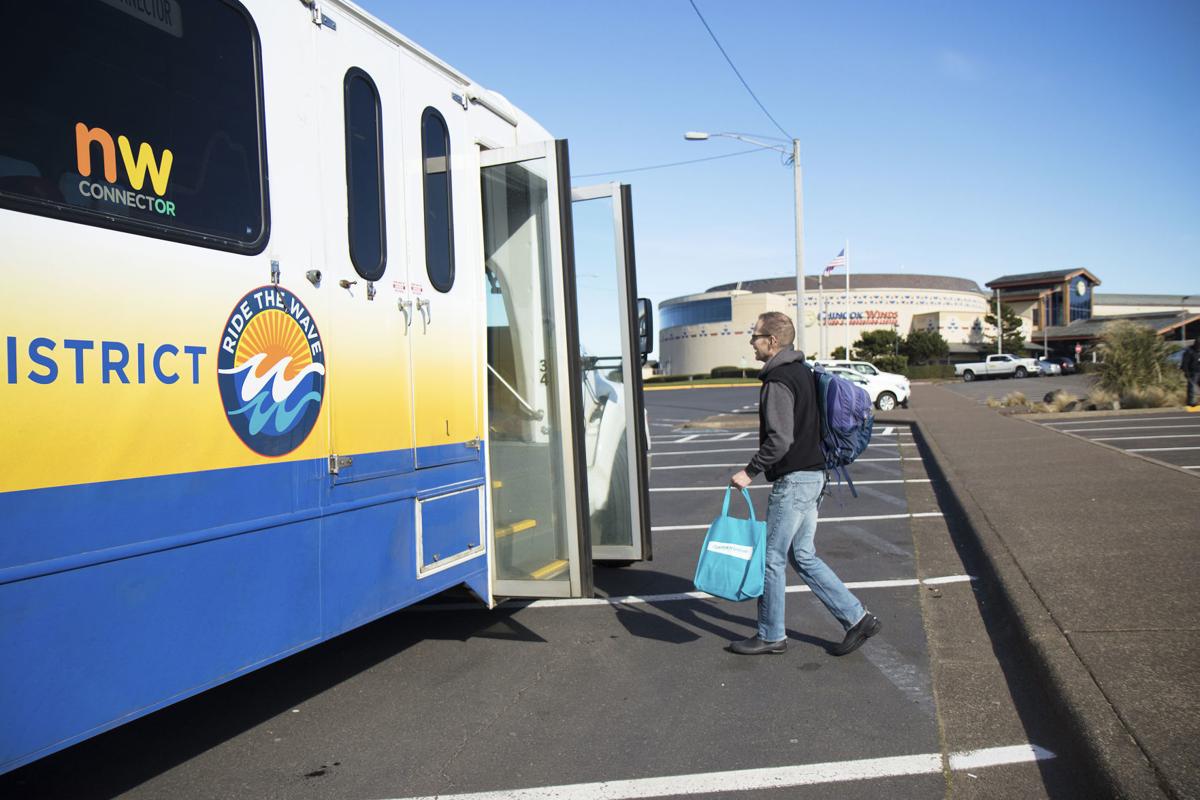 John Middlecamp of Vancouver, British Columbia, prepares to board the bus on his way back home after a stay in his Oregon coast vacation house. 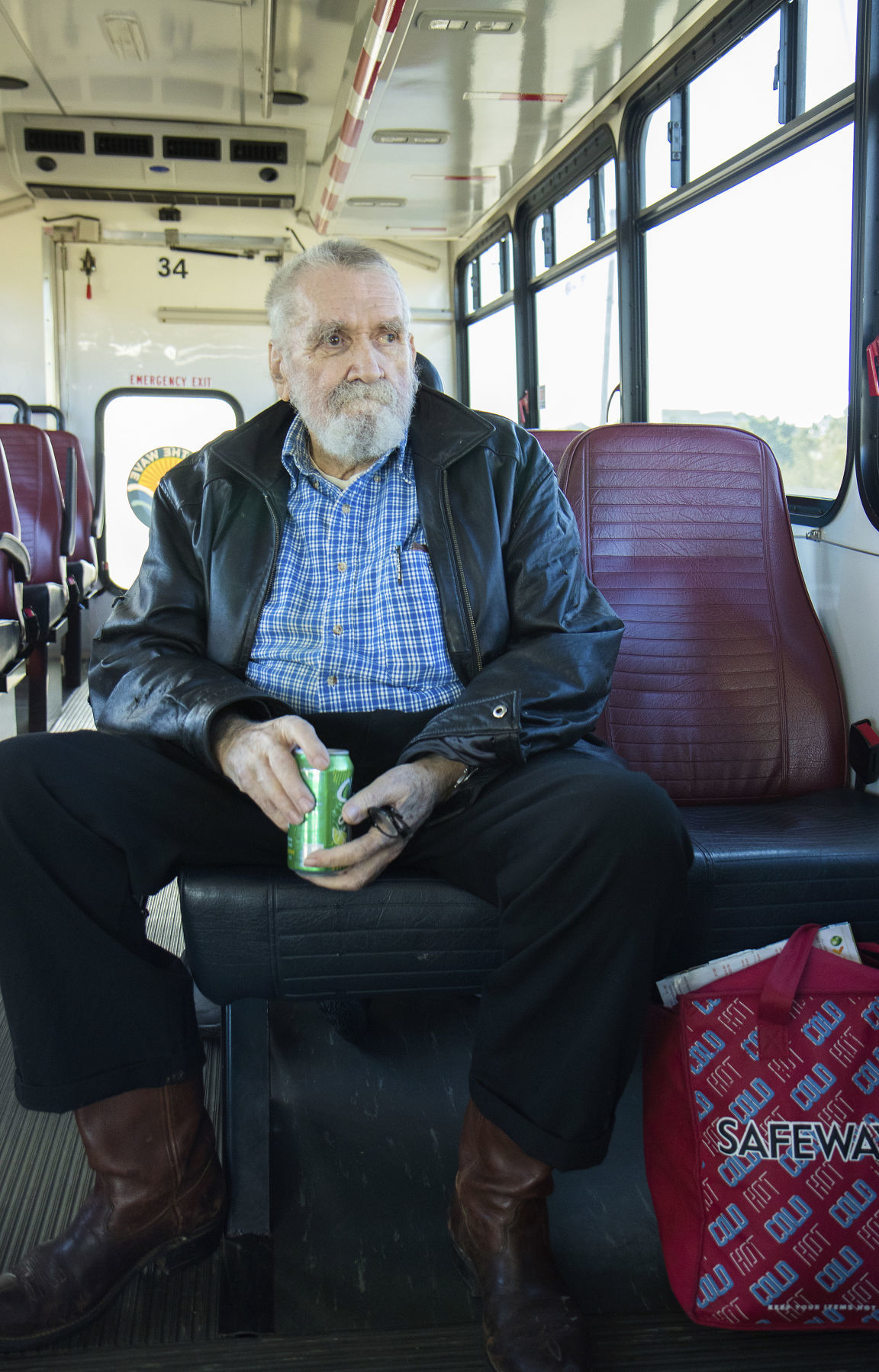 Bob McCullen, 84, a retired farmer from Pacific City, relies on the bus as his main means of transportation. 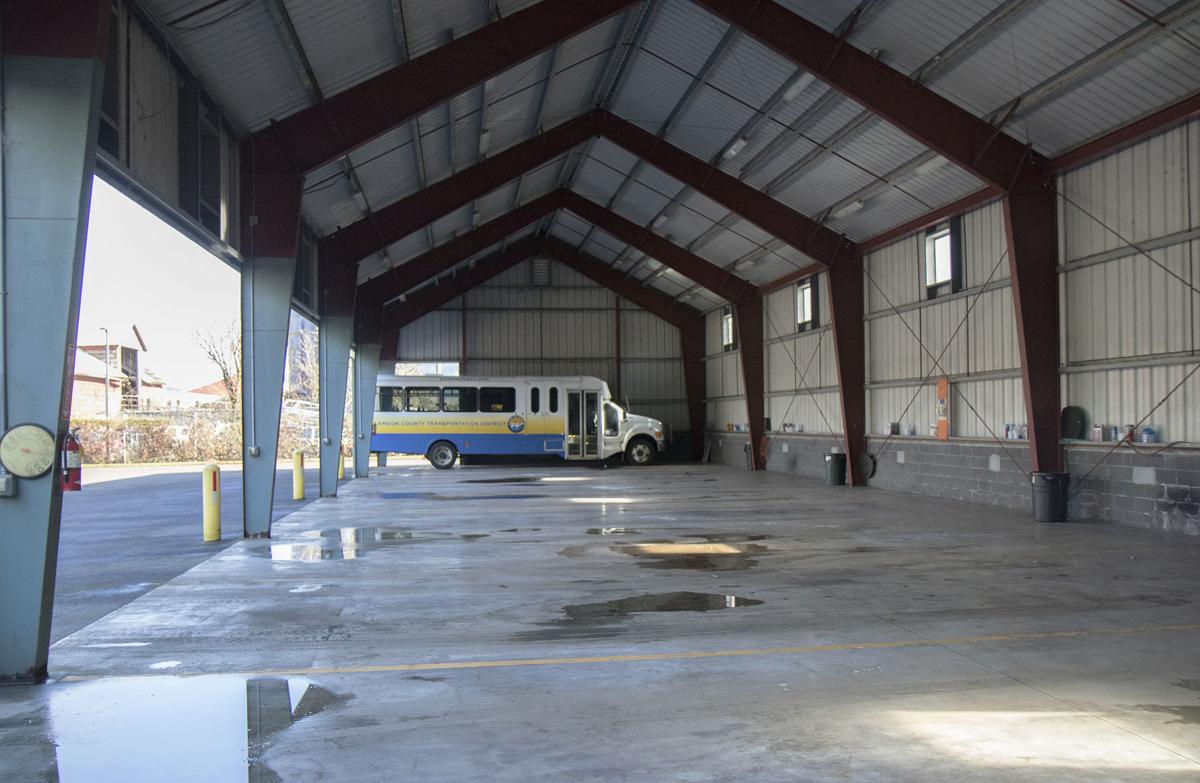 An almost-vacant lot at Northwest Connector headquarters in Tillamook, Ore., where buses are kept when not in use. 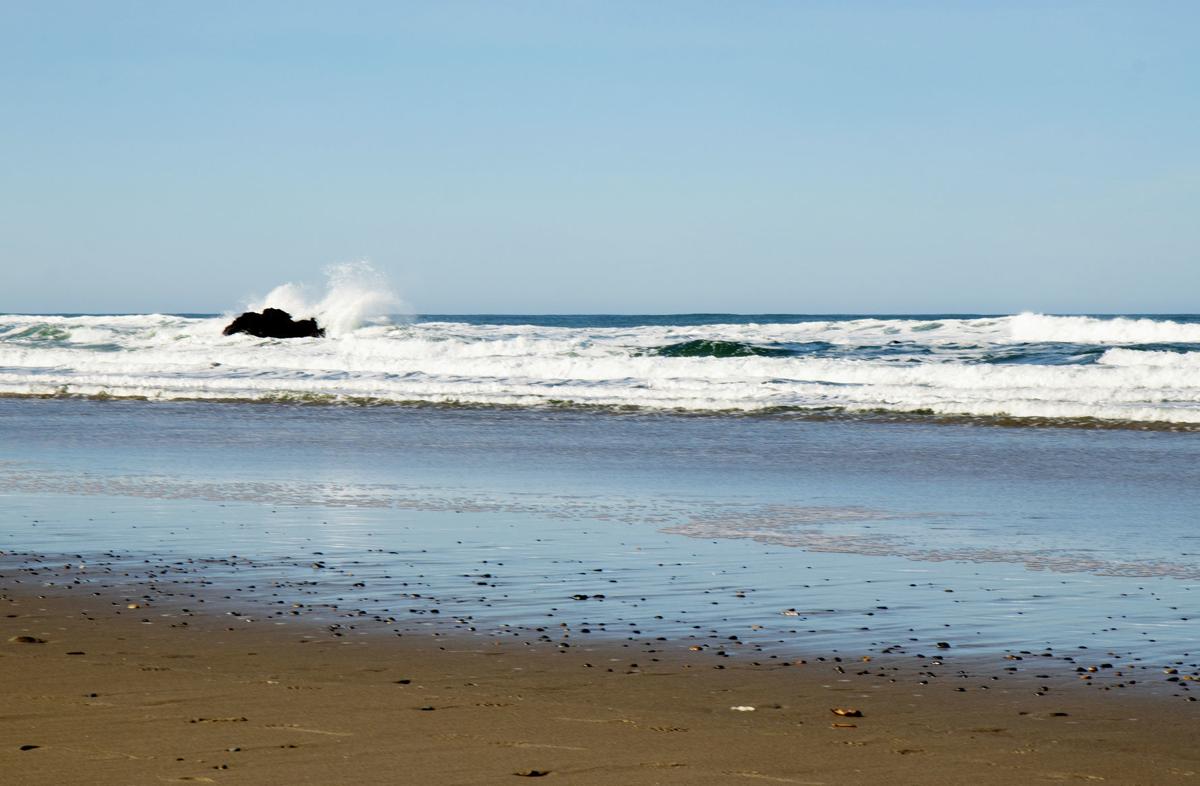 A stretch of beach in Lincoln City, Ore., across the street from a Northwest Connector bus stop.

John Middlecamp of Vancouver, British Columbia, prepares to board the bus on his way back home after a stay in his Oregon coast vacation house.

Bob McCullen, 84, a retired farmer from Pacific City, relies on the bus as his main means of transportation.

An almost-vacant lot at Northwest Connector headquarters in Tillamook, Ore., where buses are kept when not in use.

A stretch of beach in Lincoln City, Ore., across the street from a Northwest Connector bus stop.

On a windy February morning, the Northwest Connector, a bus running a route through northwestern Oregon, whizzed between coastal cities. Riders were commuting to work, returning from the hospital, en route to get groceries, out for recreation.

Carole Richardson, then employed at the Oregon Department of Transportation (ODOT), sometime around 2008 noticed that coastal highways looked like clogged arteries, especially during summer.

That's when she first imagined creating a coordinated mass transit system connecting coastal communities with one another and to urban areas in the Willamette Valley.

Richardson shared her idea with the late Shirley Kalkhoven, then mayor of Nehalem, Ore. Together, the women gathered a team and applied for a $3 million Department of Energy grant.

"I think we lost hope for a while," Richardson said. "It took months to hear back from the feds that we'd won the money. We were all elated, stunned — then ready to go."

The Northwest Connector was built on existing transit infrastructure in the area.

"I think that's how rural Oregon has to operate," said Mary McArthur, manager for Columbia-Pacific Economic Development District (Col-Pac). "We don't have deep pockets, so we have to be creative. Things like this require teamwork."

Today the system connects coastal communities from Yachats to Astoria. It also reaches inland from Astoria through communities along the Columbia River to Portland; from Tillamook through Hillsboro and Beaverton to Portland; from Lincoln City to Salem; and from Newport to Corvallis and Albany.

Doug Pilant, general manager of the Tillamook County Transportation District, has led the Connector team since 2012.

Pilant, who grew up on an Idaho farm, has been fascinated by maps and routes since he was little. He recalls that while tagging along to market with his dad, he sketched maps of towns they passed through in his notebook, adding details each subsequent trip.

"Doug's passion drives the whole system," said Danielle Amaya, a bus dispatcher. "I think it would take someone like him to run a similar program in other areas."

Richardson said when Northwest Connector was founded some urbanites criticized the project, saying that after pilot money evaporated, the system would collapse.

"Maybe there was a little jealousy from people who didn't get the grant money," said Richardson.

Yet transportation leaders say Northwest Connector has bound together urban and rural people. Both groups share enthusiasm about the bus as a vehicle for tourism, relief for highway congestion and a means of limiting carbon emissions.

According to the Oregon Employment Department, between 40-73% of coastal residents commute out of county for work. Many take the bus.

"A lot of people ride my bus to work," said John Magnano, a driver.

For riders such as Bob McCullen, 84, a retired Pacific City farmer, the bus is indispensable. Partially deaf and recovering from a fall, McCullen said driving isn't easy anymore.

"This bus has been a lifesaver for me," he said.

In Tillamook County, according to U.S. Census data, 15% of the population has disabilities, 18% live in poverty and 5% have no car. In Clatsop County, 22% are over 65.

Magnano said many residents from these populations rely on the bus as their sole source of transportation.

"Mass transportation is its own form of community," said Devlin.

Magnano, the driver, greeted an aging man as he entered the bus, thanking him for a "chocolate friendship cake" recipe.

A 34-year-old with purple hair, an electric guitar and a brown lab was on his way to the bank. Another passenger, riding the bus "just to get out of the house," offered to buy him lunch.

At the next stop, two women grasped each other's hands.

"How did your doctor visit go?" one asked.

The bus reflects the cultural reality of coastal Oregon: small-town America lives on. It doesn't look like a Norman Rockwell painting; it's often harsher, grittier, like the coast itself. But it's community.

Then there are riders like John Middlecamp of Vancouver, British Columbia, who was riding the bus on his way back from his Oregon beach vacation home.

July and August are peak visitation months, but the coast has a stream of tourists year-round.