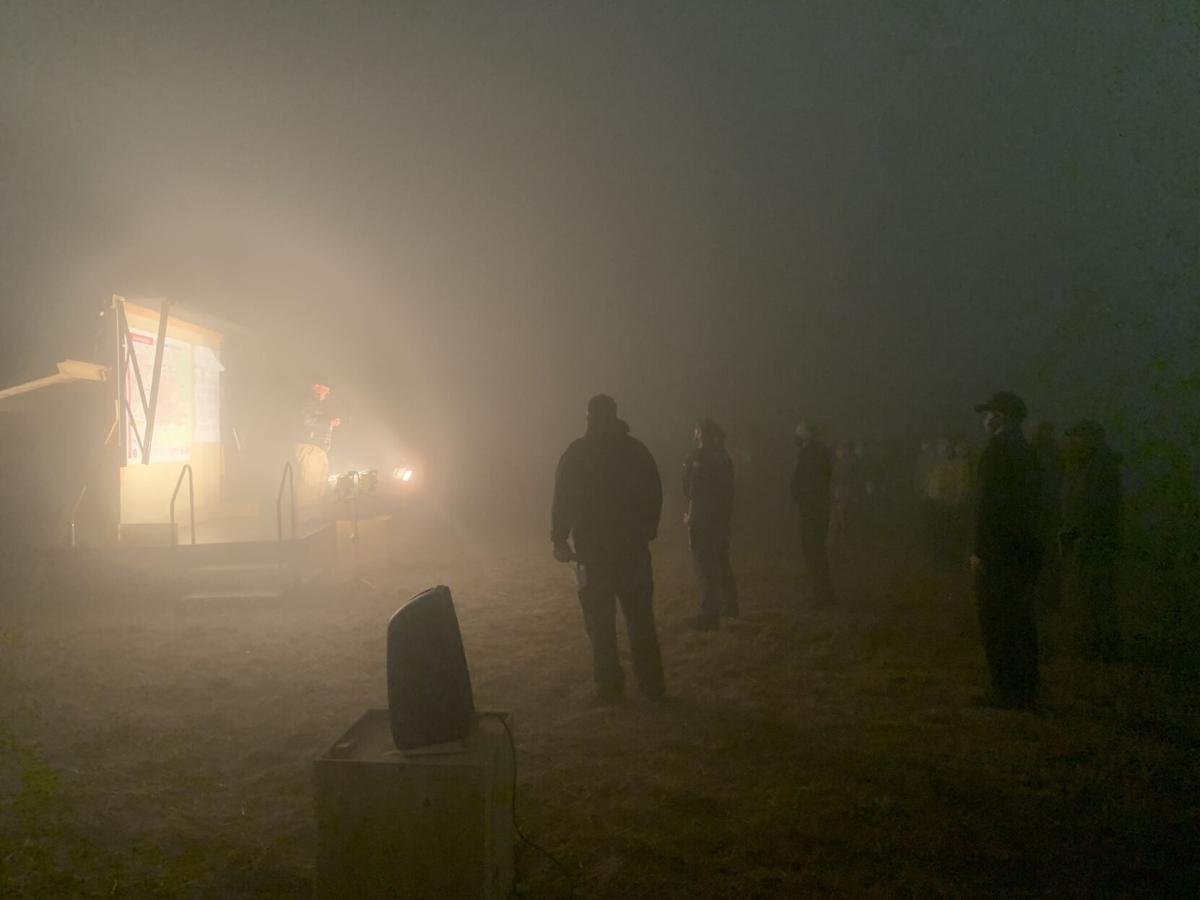 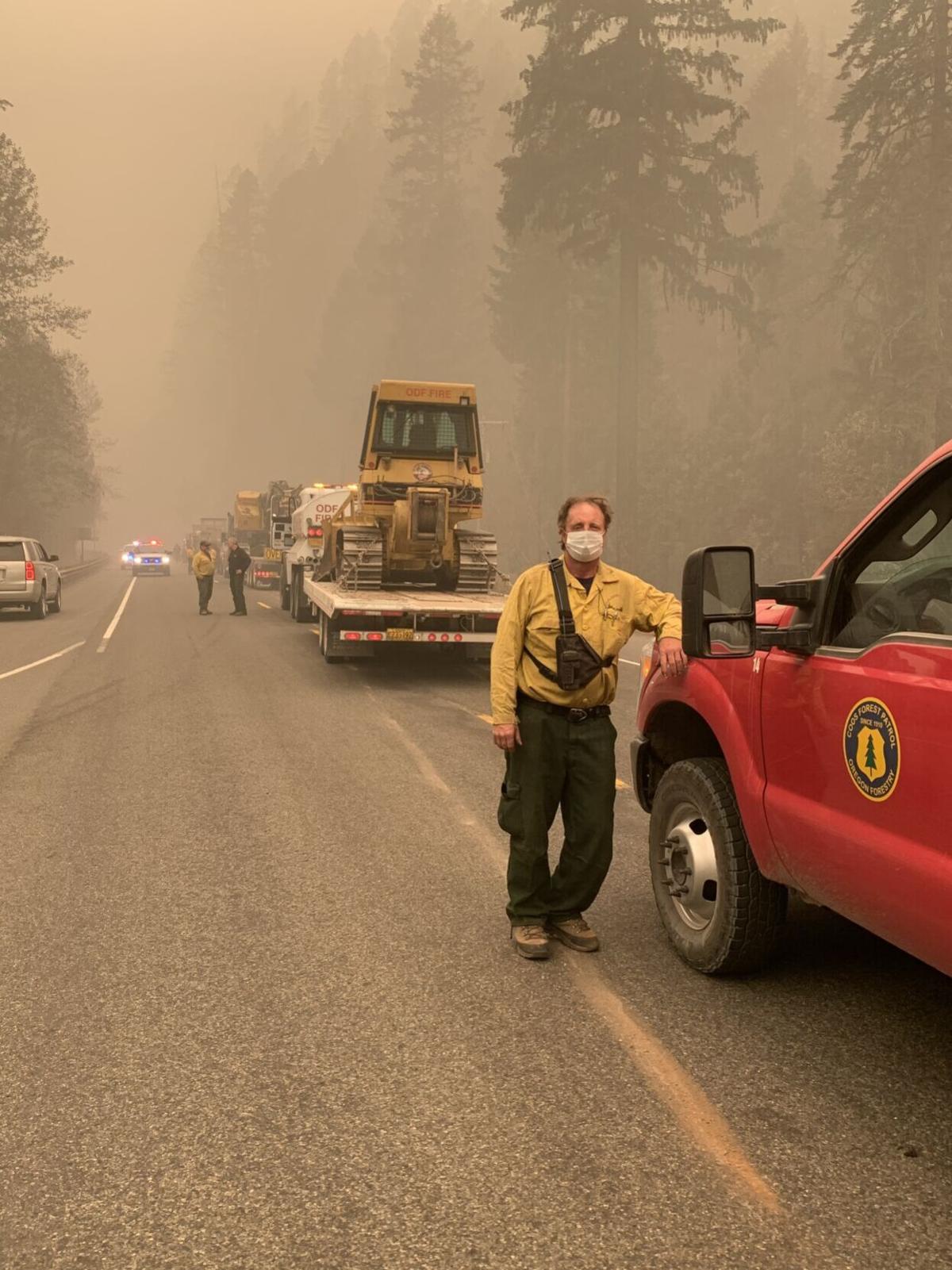 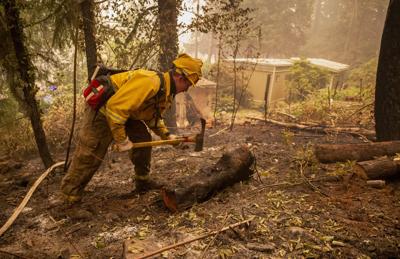 SPRINGFIELD — Never in his 33-year career had Chris Cline seen anything like the size, speed and severity of the Holiday Farm Fire.

At about 7:45 p.m. Sept. 7, Cline responded to a fire burning 32 miles east of Springfield along Highway 126 that started in the Willamette National Forest. By the time he and his crew arrived, it was already well out of control.

"It was almost instantaneously into a firestorm," Cline said. "This one went right over the top of us."

The Holiday Farm Fire was one of several blazes that ravaged Western Oregon in the weeks after Labor Day, whipped into a fury by high easterly winds and feeding on bone-dry fuels.

More than a thousand firefighters from across the U.S. and Canada arrived to tackle the monstrous inferno, which torched 173,393 acres, destroyed at least 430 homes and 20 businesses and killed one person, a 59-year-old man from Vida.

While an extreme example, the fire illustrates what steps are required to bring a conflagration under control, from initial attack to final containment.

Under normal circumstances, Cline said district firefighters are able to catch 97-98% of fires at 10 acres or less.

ODF is aggressive in its initial attack, sending handcrews wielding tools such as shovels, axes, chainsaws and pulaskis. Once they establish a safe anchor point, Cline said they can flank the blaze by clearing vegetation and digging firebreaks around the perimeter.

Conditions leading up to the Holiday Farm Fire were a veritable tinderbox, Cline said, with multiple days of 100-plus degree temperatures — unusual for the Willamette Valley. The local area was also lagging 20 inches behind on average precipitation.

Add on top of that a savage windstorm, and the situation became critical.

Cline could only watch as the Holiday Farm Fire raced into the forest canopy, shooting embers up to a mile and a half away and starting new fires. In one night, the fire burned halfway to Springfield, while immediately threatening other small communities along the McKenzie River.

"It went from a 'putting fire out' mindset to turning around and knocking on people's doors," Cline said. "It turned into a life-saving mission."

Right away, Cline said he knew he would need more resources than his district alone could offer.

He reached out to ODF headquarters and ordered an incident management team, led by his friend Link Smith, district forester in the neighboring Western Lane District.

Oregon has three incident management teams carrying about 40 firefighters from across the state that work on rotation. Smith's team was the second one up, after the first was sent down to Klamath Falls to battle the 14,473-acre Two Four Two Fire.

Meanwhile, fires were also exploding near Lincoln City, Estacada and up the Santiam Canyon east of Salem, putting an enormous strain on firefighting resources.

"When we got there that following day, the state fire marshal team was already there, just trying to protect structures," Smith said. "The first couple days was kind of chaos."

Eventually, the incident management team would swell to more than 1,000 firefighters, mostly from Oregon but some from as far as Florida and Canada. The first order of business, Smith said, is setting up camp for the crews — essentially constructing a small city with showers, a kitchen and ample supplies.

Smith hailed the Springfield School District, which not only allowed fire managers to set up an incident command post at Thurston Middle School, but also provided space for firefighters to set up base camp at Bob Artz Memorial Park.

"They bent over backwards for us," Smith said.

Despite the magnitude of the Holiday Farm Fire, Smith said the basic principles of firefighting remained the same.

After a few days, the wind died down which allowed handcrews to begin the enormous, weeks-long process of lining the fire perimeter. Smith said it is not unusual for crews to dig 50-60 miles of firebreaks per incident. But this fire's perimeter would stretch an astounding 280 miles — roughly the distance from Portland to Medford.

"Where do you start? At some point, you just have to find a cold spot or safe anchor point and just get started chipping away at it," Smith said. "That's essentially what we did."

Help came in the form of assistance from private landowners, including timber companies like Weyerhaeuser and Seneca Resources. In all, the incident management team contracted with landowners to send out more than 175 pieces of heavy machinery, such as bulldozers and feller bunchers to remove hazardous trees.

Such cooperation dates back to the earliest days of firefighting in Oregon, starting in 1904 with Springfield's own Booth-Kelly Lumber Company, Smith said. The strategy continues today, with numerous examples of farmers and loggers supporting firefighters on the front lines.

"In a big event like this, you cannot do it without their help," Cline said. "They are to be highly commended as well."

More than 1 million acres of land burned during the 2020 fire season, of which 374,353 acres were private industrial and non-industrial land, according to ODF.

For days, smoke from the Holiday Farm Fire was too thick to safely fly air tankers and helicopters. That left it up to "old school firefighting," Smith said, as crews methodically dug containment lines wherever they safely could, prioritizing human life first and foremost.

After three weeks, Smith's team rotated out for a much-needed break, handing over command to a new incident management team. It took five weeks of intense firefighting to bring the Holiday Farm Fire mostly under control.

"We would have asked for more people if we could have got them," Smith said, adding that the number of other fires burning from Lincoln City to the Santiam Canyon left ODF teams sorely understaffed. "The resources just were not there."

On Oct. 12, command shifted back to the district, which continued to monitor fire lines even with a change in weather.

Though the fires may be extinguished, cleanup and rehabilitation remains a priority for the state and private landowners alike.

"Our communities are reeling in the aftermath of the fires," said Seth Barnes, director of forest policy for OFIC.