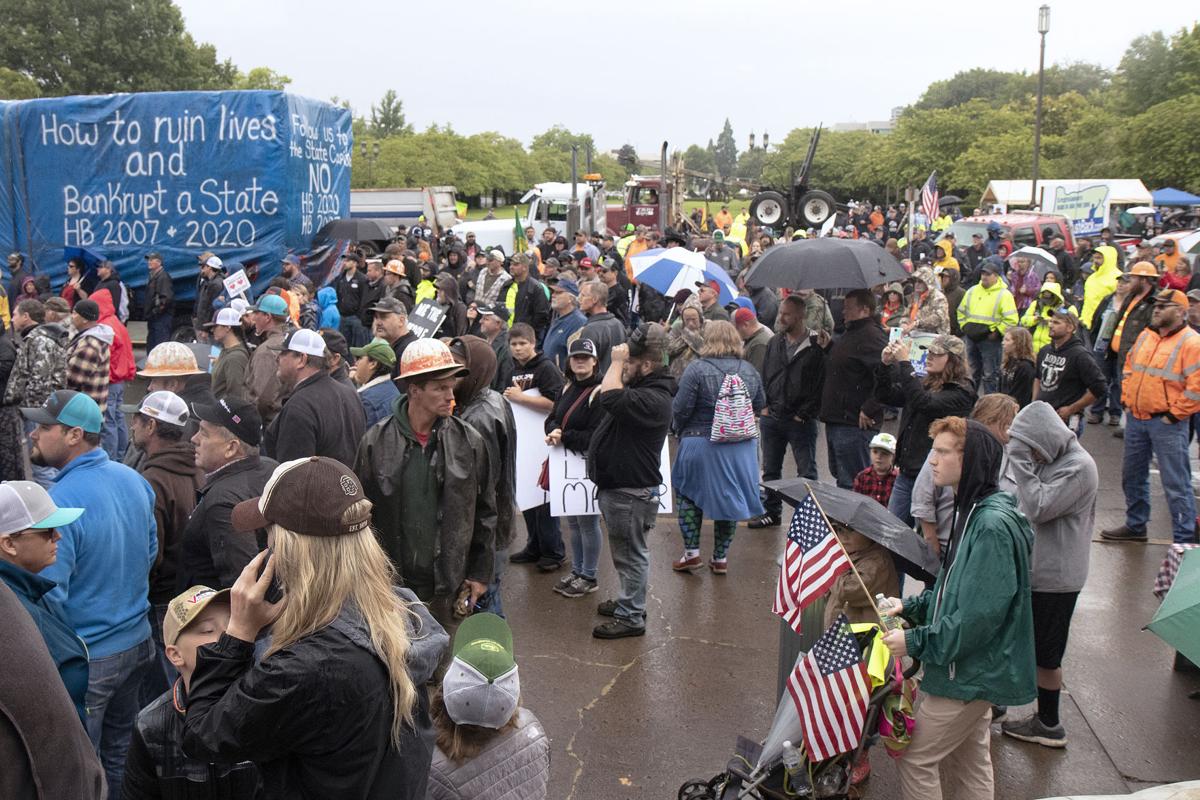 Loggers, farmers and others protest in front of the Oregon Capitol June 26, 2019. 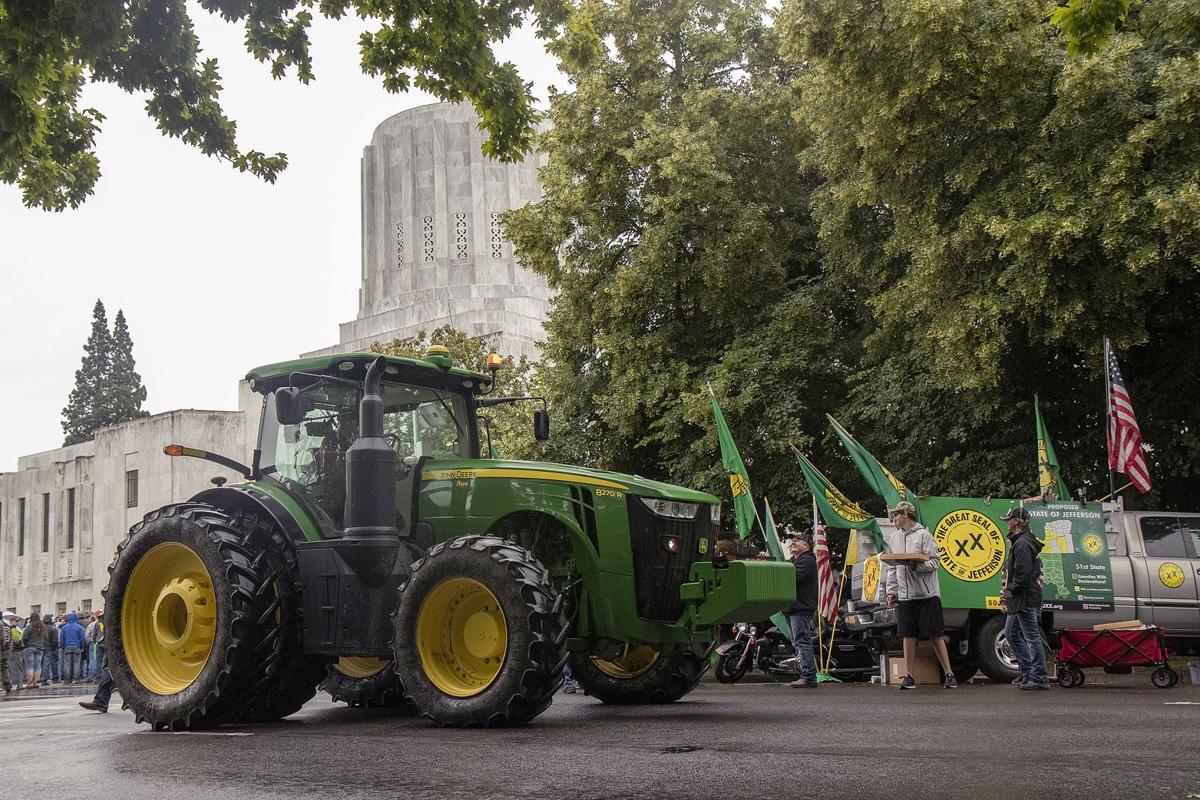 Trucks, tractors and other heavy-equipment vehicles circled the Capitol building June, 26, 2019, in protest of a proposed climate legislation.

Loggers, farmers and others protest in front of the Oregon Capitol June 26, 2019.

Trucks, tractors and other heavy-equipment vehicles circled the Capitol building June, 26, 2019, in protest of a proposed climate legislation.

“The loggers who came here with their trucks – in very, very large numbers – was a political phenomenon that will be always very memorable. They were here all day, circling the Capitol.”

Those are the words of Oregon Senate President Peter Courtney, D-Salem, who praised the civility and courtesy of the loggers, truckers and others who interacted with lawmakers and legislative staff during that June 27 rally. “That’s different in this day and age,” Courtney said.

The demonstration was against House Bill 2020, the carbon cap and trade bill that supporters called Clean Energy Jobs. By that day, Courtney already had stunned those supporters by announcing the bill lacked the votes for Senate passage.

Only months later, a new version likely will await legislators when they return to Salem in February for their five-week “short” session. Democrats are striving to have a bill ready this fall, in time for public hearings.

“I think it’s very feasible for us to have the conversations and the suggested changes that we need to come into the short session and pass the bill,” House Speaker Tina Kotek, D-Portland, said last month. “I do think the bill benefits the entire state. We can do a better job of explaining it. And if we didn’t get it right, let’s keep working on it.”

The 2019 Legislature ended in bitterness, frustration and relief, so legislators on all sides hope the time away from the Oregon Capitol was beneficial.

“Hopefully, time will heal a number of wounds, but I can’t say that for sure,” said Sen. Michael Dembrow, D-Portland. He and Rep. Karin Power, D-Milwaukie, chair the legislative committees that would handle the bill.

HB 2020 progressed through numerous iterations in the 2019 Legislature but did not win Republican support. Senate Minority Leader Herman Baertschiger Jr., R-Grants Pass, and other Republicans said that Democrats would be unwise to bring it back in February. They said short sessions are for budget adjustments and other legislative fixes, not passage of major policies.

“I really don’t have a good crystal ball picture of what’s going to happen,” Baertschiger said. “That particular bill had so much stink on it that I just don’t know how you bring it back so quickly and not wind up in the same boat that you were in six months ago.”

As for the House Republicans, in September they voted in new leadership, electing Rep. Christine Drazan of Canby as their caucus leader. Interviewed on her first day in that role, Drazan said the caucus had not had a chance to discuss its approach to climate change legislation for the February short session.

"But I can tell you this,” she said. "As long as the core principal of [House Bill] 2020 is to adopt a California-style cap and trade program that doesn’t actually fit within Oregon’s constitution and Oregon families can’t actually afford, the Republican perspective on that will not change. … It is just bad policy.”

Outside the Willamette Valley, Oregonians are taking notice. Jana Jarvis, president of the Oregon Trucking Associations, said the trucker and logger rallies at the Capitol this past summer reawakened rural Oregon to what was going on in Salem.

“In all the years I have done this work, I have never seen the level of participation at rallies that I saw, particularly the last Timber Unity rally,” she said. “It will be interesting to see what the impact of that momentum is on the policy that comes forward.

“If you think about the cost of fuel going up, and 80 percent of the goods in Oregon move by truck, and our costs are going to go up, you can extrapolate that data to determine that probably there will be some cost increases in the products you buy in Oregon.”

Sen. Dembrow said he wants to bring more clarity to how the cap and trade program would affect fuel prices.

That need for better communication has been a key theme among advocates as they regrouped. Rep. Power said she’s been getting great feedback in talking with regular Oregonians.

“Much like a game of Telephone, what they heard about the bill wasn’t always true because you get little snippets of what is going in Salem, and it changed a lot from the beginning of the bill,” Power said.

Megan Kemple, founder of the Oregon Climate and Agriculture Network, said such conversations will be a priority for her group as it works to pass a bill in February.

And without providing specifics, Democratic Gov. Kate Brown and others say the governor’s staff has been meeting with rural interests to see whether their concerns can be addressed in the new legislation.

“We could have done more to have more honest, just candid, direct conversations with people about their concerns, about how we can mitigate their concerns, about what’s working and about what we see as far as the benefits in this legislation. There wasn’t enough of that,” he said. “We need to get it down to a human level that everyone can relate to, and then talk about those investments we’re making.”

Others say the lack of understanding is a myth and the problem was HB 2020 itself.

“If you look at 2020 carefully, it’s a grab-bag of promises. There’s everything that you can think of called out in that bill that in some way or another is supposed to be helped by spending money on it,” said Sen. Cliff Bentz, R-Ontario.

He said the bill “instantly damages rural Oregon” and the entire concept needs an overhaul, not mere tweaking.

“The logging community is scared to death that once carbon is priced, then they will be put out of business. And I think ranchers and the farmers are right there with them,” Bentz said.

In the end, legislators, lobbyists and the public have been left wondering what, if anything, will have changed between June and February.

“I don’t think we have that fundamental shift in the conversation at this point in terms of next steps,” Jenny Dressler, a lobbyist for the Oregon Farm Bureau, said this month. “The governor and legislators are reaching out to determine those areas that some constituencies have greater heartburn with.”

Advocates also have been talking with Democratic senators to gain the crucial 16th vote needed for Senate passage, while shoring up support among several other Democratic senators who were squishy. “First and foremost, we’re not giving up,” said Don Sampson of the Affiliated Tribes of Northwest Indians.

As for those negotiations in the Senate, political scientist Jim Moore of Pacific University said there is room for that, “but are people’s backs too stiff? Are they too set in their ways right now?”

“If I were the Democratic leadership, unless I had the votes lined up, I would say we’re not going to deal with this in the short session. I’d have something bright and shiny so that Democratic voters thought we’re advancing ourselves and would get them jazzed to move into the election season,” Moore said.

“But the climate change legislation is moving. It’s been moving for a decade, and it will continue to move forward regardless of what Republicans want to do. It’s just when that happens.”

Surveys show that among Democratic activists, climate change is a top priority, according to John Horvick of DHM Research. Among the general public in Oregon, it’s far down the list.

“It’s not that they don’t care about it. It’s not even that most don’t think we should be doing more. It’s just amongst all sorts of priorities, it’s not very high,” he said.

And partisan leanings remain a key determinant: “There’s a much bigger gap between D’s and R’s than there is between urban and rural. If you’re a Republican in Clackamas County, you’re much more likely to be like a Republican in Harney County on this issue than if you ignore those party labels.”