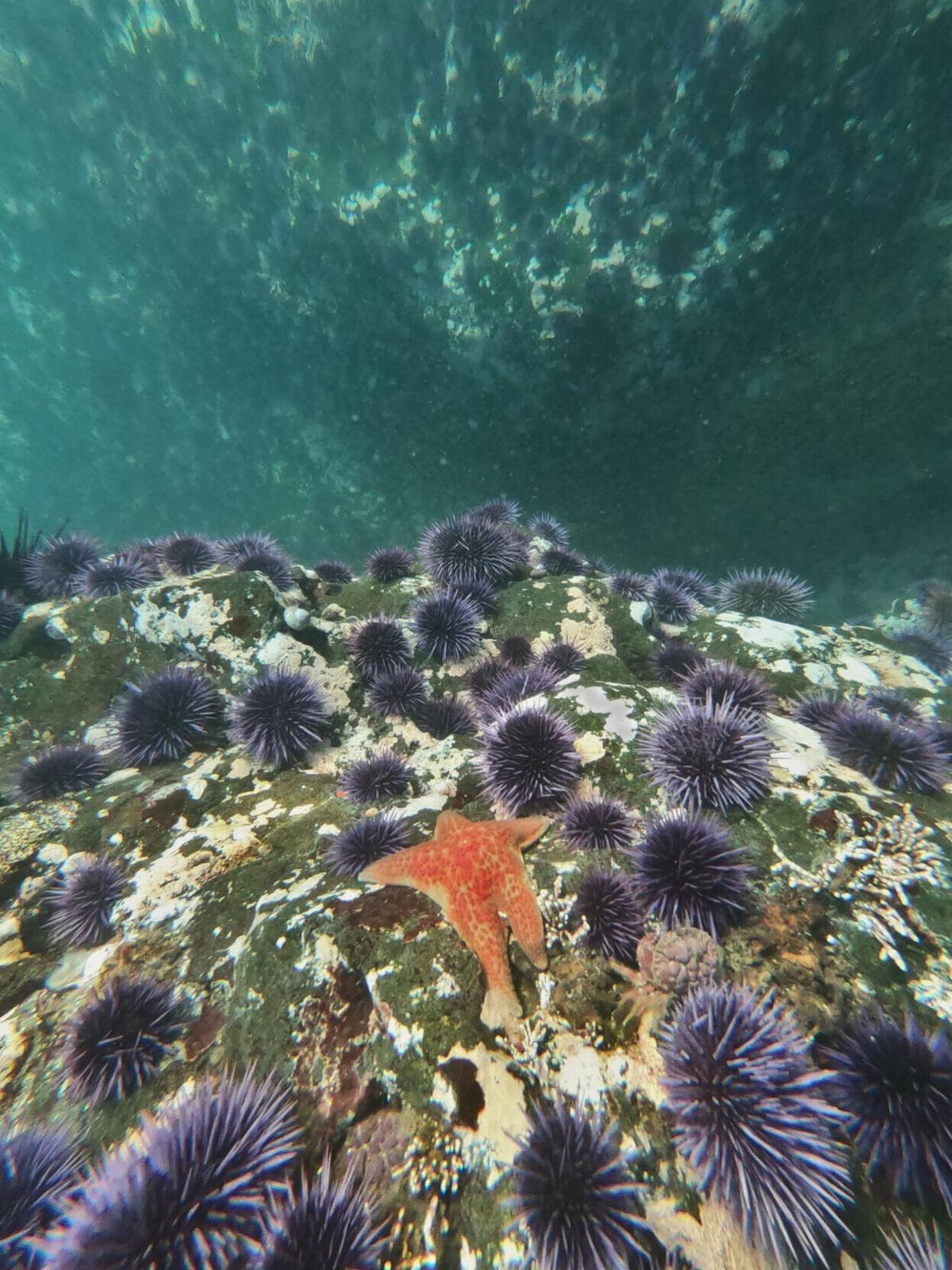 The purple sea urchin population has increased in recent years. The urchin have grazed down the extensive bull kelp forests that line the coast. 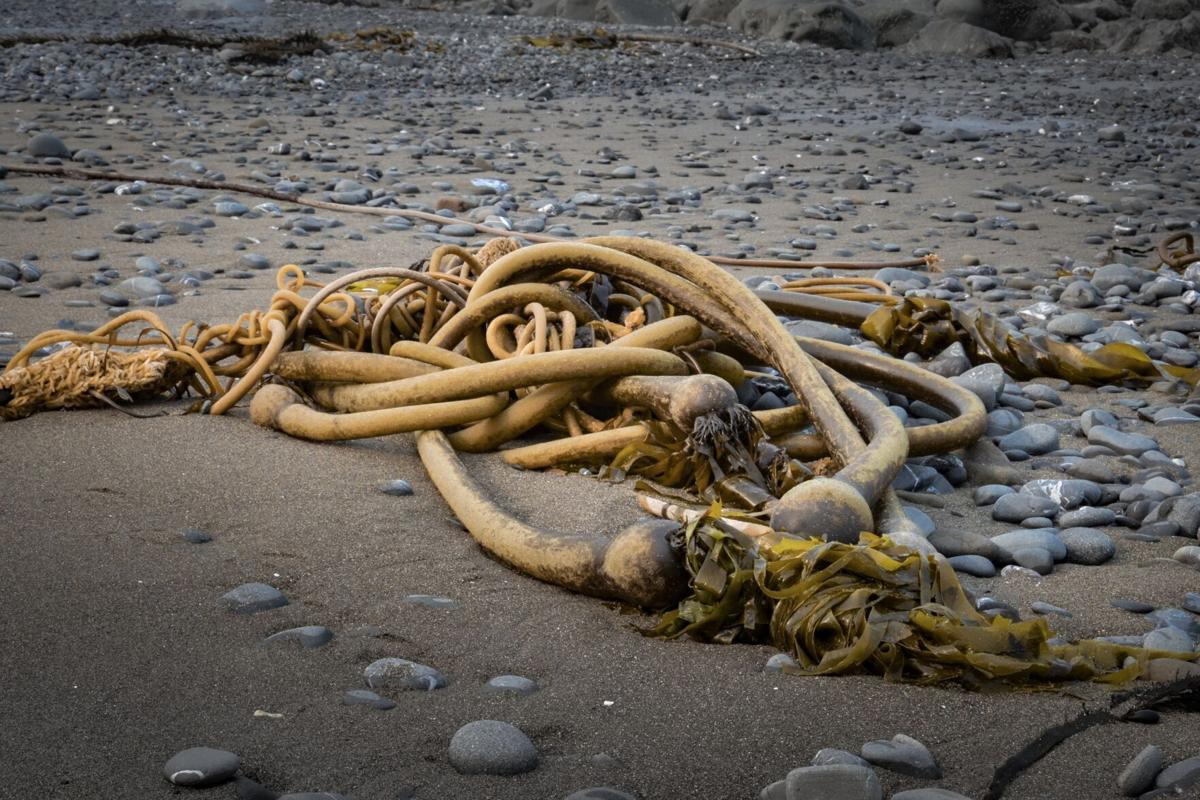 Bull kelp washed up on shore near Port Orford. 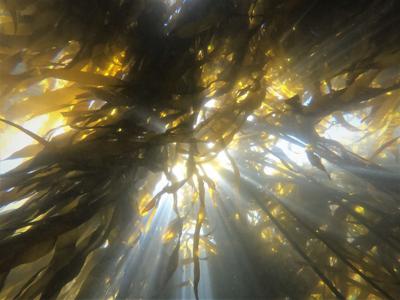 Nestled in the tiny Southern Oregon coastal town of Port Orford is the home base of Oregon Kelp Alliance (ORKA), self-described bull kelp defenders. This non-profit consortium of scientists, fishing enterprises, ecotour operators, regional organizations, and divers are attempting to reverse the rapid decline of Oregon’s bull kelp due to purple sea urchins grazing down extensive forests that line the coast.

Dave Lacey, owner of South Coast Tours in Port Orford, was one of the first to sound the alarm.

“It used to be difficult to paddle through Nellie’s Cove, a popular spot for kayaks and sport divers. Tom Calvanese, the Oregon State Field Station manager, and I asked commercial fishermen, ‘Doesn't it seem like the bull kelp is coming in later?’ First it seemed like it was May. The next year June. Then it dawned on us, the bull kelp wasn't really coming in later, it was just gone. After trying to get government agencies on board with little success, we created ORKA and began recruiting people and organizations. It’s been exciting to watch The Oregon Kelp Alliance grow so fast.”

“The bull kelp issue went undetected in Oregon longer than in other regions due to the inaccessibility of our rocky cliffs,” she said. “My aim is to help people understand that the kelp’s well-being has far-reaching implications, not only for our ecosystem or our economy, but also their spiritual and cultural significance. When I dive into a kelp forest it’s kind of like being in a cathedral. When I look up, I’m awed by the life force around me.”

Another partner is The Elakha Alliance. An intertribal organization committed to restoring sea otters to the Oregon coast by 2050, Elakha has a twofold mission: first, undo the cultural wrong done to tribal communities when sea otters were nearly exterminated during the 18th and 19th century fur trade; second, reintroduce otters to create a thriving, biodiverse ecosystem.

Chanel Hason, Elakha’s director of outreach and community relations, adds, “The urchin culling effort is essential. Before we can reintroduce sea otters, kelp forests have to be healthy and thriving.”

Dave Lacey designed his ecotours to provide experiences for adventurists to become advocates for conservation.

“During our kayak and snorkeling tours, our guides tell the kelp’s story, giving participants an opportunity to reach in and see, feel and even taste bull kelp right from the boat. We hope their connection with nature will impact their choices, like how they vote, organizations they support, and their willingness to speak out on behalf of our oceans.”

With growing public engagement, and Oregon Department of Fish and Wildlife now a partner, ORKA has targeted five protected enclaves, from Haystack Rock to Brookings, to research and hopefully mitigate kelp loss. The multiphase plan begins with surveying coves and then, where indicated, culling tens of thousands of sickly, ‘zombie’ purple urchins. Over the last year, dozens of volunteer divers from across the state have come to lend a hand, and a hammer at Nellie’s Cove. Once the urchins are removed  the process of replanting kelp.

With culling underway, Port of Bandon Manager Jeff Griffin, in partnership with Oregon Dulse, is exploring urchin ranching to ‘fatten up’ emaciated purple urchins to sell to commercial markets.

Griffin explains: “We place extracted urchins into 10 small pool-sized seawater tanks filled with tumbling seaweed, much like they’d find on the ocean floor. We hope to create a regional taste for uni, a seafood delicacy, for local restaurants and small seasonal markets. If we can use urchin to feed people, it would be a win for all.”

“It can be upsetting thinking about all that we're losing and how tough a task it is. But there’s another way to look at it. We, as scientists and citizens, have an opportunity to not only save what we can, but also to create stronger, healthier habitats in some way. That has really helped bring me joy and think about the possibilities rather than the losses.”