Skip to main content
You have permission to edit this article.
Edit
Home
Subscriber Services
Cover Story
The Land
Making a Living
The Culture
Features
Views
e-Edition
Share This
1 of 6 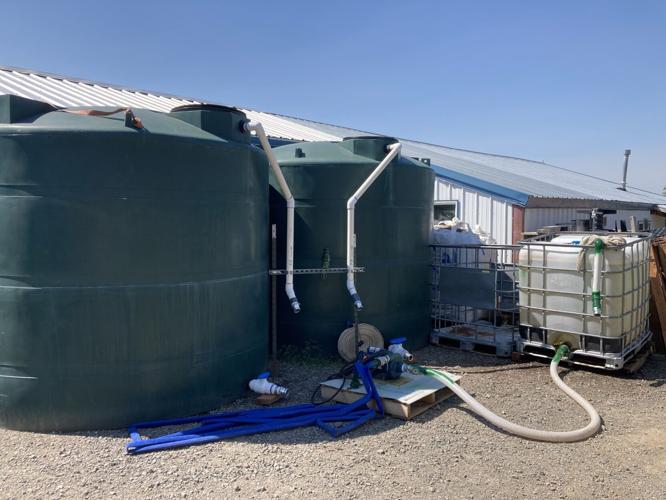 Emergency water tank system set up at the neighboring nursery during the drought. 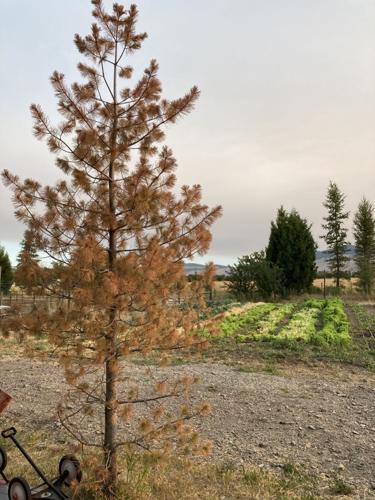 Many white pines didn't make it through the drought at Nella Mae's Farm. 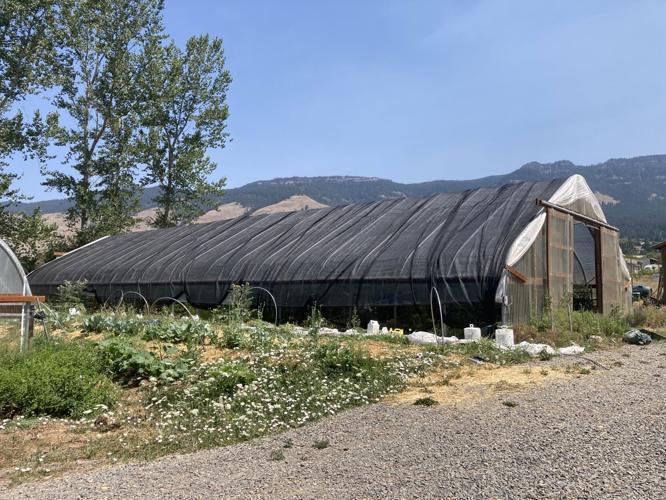 Shade cloth borrowed from a neighbor to save water and reduce heat stress on tomatoes at Nella Mae's Farm. 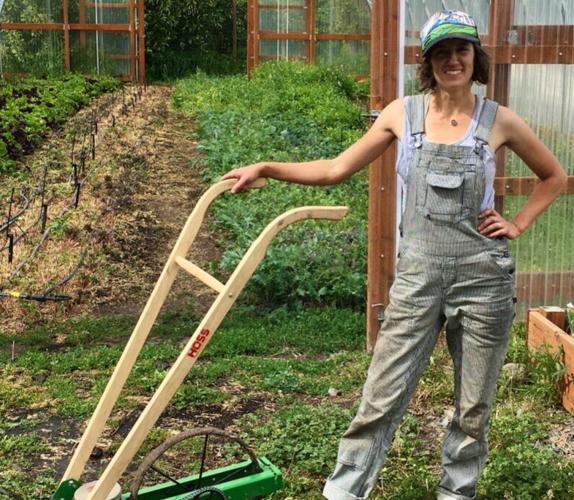 Nella Mae Parks with a seeder. 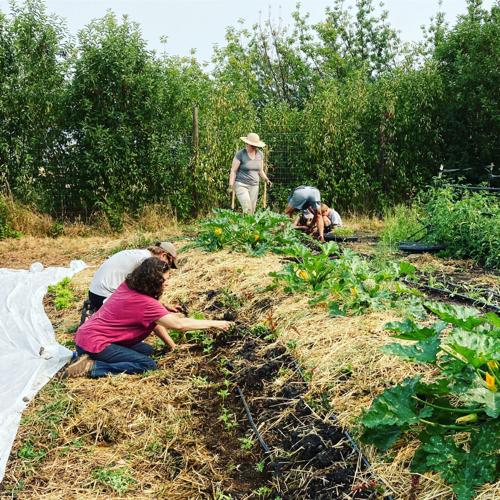 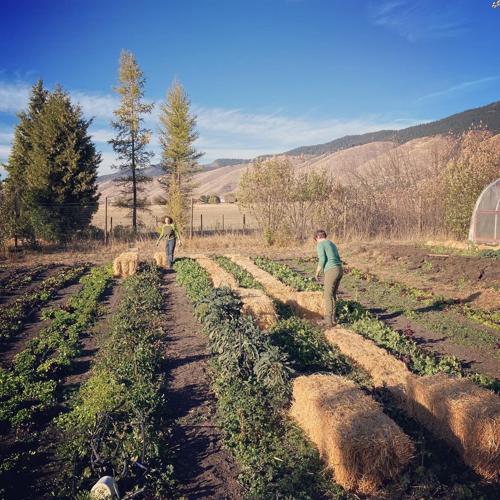 Laying out straw mulch at the end of the season.

This summer a heat dome hovered over the Pacific Northwest for four months, moving the jet stream north, creating extreme heat and drought, exacerbating fire conditions, and making it harder than ever for farmers like me to grow food.

A young farmer friend of mine called in June to say he lost all of his meat rabbits after temperatures jumped to over 100 degrees in western Washington. Another friend saw her dairy goats lose a huge number of pregnancies due to heat.

Farmers across eastern Oregon had to figure out how to farm with zero ditch irrigation water this year.

Worst of all, Sebastian Francisco Perez, a 38-year-old man working at a nursery in St. Paul, Oregon died in June when temperatures rose to 115 in the Willamette Valley. This news broke my heart. It hit home. This man was working on a farm like me; he was only two years older than me. He was my peer just doing his job in conditions he had no power to change.

This year we had no springtime, no water — only heat and fire. The Bootleg fire burned 400,000 acres, killing trees, livestock, wildlife and burning up forage for the animals that survived. The fire burned so hot it created a 200-foot-high fire tornado. It created its own weather. It maimed cattle, burned feet and udders, and killed trees that had survived the previous seven fires.

The smoke made working outside dangerous. It was so thick it blocked sunlight and delayed crop growth and maturity. There were days the visibility was so bad in my valley that huge flocks of birds — hawks, buzzards, starlings, crows — sat lined up on center pivots, wheel lines, and powerlines because they couldn’t see well enough to fly or hunt.

It was eerie and ominous. Some days I felt like I was living in a post-apocalypse reality. If this sounds dramatic, you probably work inside and not with living things; you’re buffered from nature; you don’t work on the front lines of climate change.

I wrote this essay not to bombard anyone with depressing snapshots, but to show and share with folks what is really happening on the ground. We the people are those whose lives are upturned or lost to hurricanes and wildfire. We the people are scrambling to figure out how to address, adapt and survive climate change.

I want to reach leaders with these stories because I believe we the people have the will to face this problem, but we need leadership to get us all rowing in the same direction.

We need leaders to follow the example of my neighbors who pulled together this summer to get through drought, heat and smoke.

Preparing, adapting and coming together

On July 19, my neighbor and mentor Sandy called with news that set my day in motion and made my heart sink. “We’re out of water. We’re trying to figure something out, but I had nightmares about it all night. This is bad.”

Sandy and her husband Dick own a nursery down the road from me. They are used to their water sources — a ditch and a spring — running dry for a few weeks at the end of August. They are prepared for that, but not for losing water six weeks early.

I was already on my way to my neighbor Jorge’s house with 50-gallon barrels of water for his steers. He just bought his place and five steers—a dream he worked toward for the last 25 years. He relied on the ditch to water them and didn’t have a back-up plan being so new to his place.

Sandy had already been preparing for lower flows for several weeks. She put shade cloth on four of her greenhouses to reduce heat and conserve water. She was trying to get more of her mature plants out the door and decrease her inventory. Some rancher friends to the south had seen the drought coming and started decreasing their herd in April to prepare. They moved to eastern Oregon from Wyoming because of drought and took its early signs seriously.

As each of these water and heat issues arose for us, we leaned on each other and on other neighbors for help. Two loaned us an additional shade cloth. Several brought over huge tanks to store water. The local Soil & Water Conservation District helped get the tanks filled. Some friends from town came to help harvest crops that we couldn’t water and pull the shade cloth over the greenhouse.

I feel lucky to have the kind of neighbors and friends that pull together. Anyone who could help did. We eked by because we have a functional community. What we don’t have is climate policy that will keep this situation from repeating and worsening.

I haven’t lived in a time before we knew climate change was happening. I grew up with an unsettling confusion about why no one seemed to be doing anything about it.

But really, what confused me was the lack of national leadership by policymakers to address this most existential threat. There has been no “war effort” against climate change — only bickering. We haven’t been called up to do our civic duty to reduce greenhouse gases — we’ve been polarized around it. For generations now, our elected leaders have failed to lead, and citizens have worked on this problem piecemeal.

I have come to see that the will to limit and adapt to climate change resides in the millions who are already doing the work.

My neighbors have been growing native plants for 35 years for restoration projects. My rancher friends on Catherine Creek are working to restore salmon habitat hand-in-glove with their cattle operation. In the last 15 years the local food movement has blossomed with folks in all stages of life starting small farms like mine to feed their own communities. There are seed savers and tree planters, students and scientists, entrepreneurs and families all trying to figure out how to have a smaller human impact on our planet.

The work of these millions is critical, and it needs to be scaled quickly. We must use a buckshot approach to address climate change and adaptation at multiple levels.

We need to leave behind the lazy and costly ideas that:

And, we must demand or elect or somehow conjure national leadership.

How things would look

If we changed our approach and thinking, instead of spending billions of dollars developing a few “climate-ready” GMO seed crops, we would invest in farmers and seed savers who have hundreds of varieties that have been adapted to extreme weather over centuries. We would study, trial and disperse these seeds.

Instead of spending billions and risking lives on wildfire suppression as we have for 130 years, we would follow the lead of land managers who use cultural or prescribed burns to decrease catastrophic wildfire. Lands managed this way by the Klamath Tribe in the Bootleg complex survived.

Instead of assessing forest thinning for profit, we would assess it in terms of jobs created, money saved in future fire suppression, undisrupted lives and businesses, and the health of the forest. We must look at these actions as investments in our future resiliency rather than activities that must return profit. After all, we don’t hold fire suppression to a profitability standard.

What I long to see is a collective, diverse, urgent approach to climate change with local, state and national leadership. What else are institutions like government for if not to help organize citizens to address problems we can’t fix alone? Individuals did not create this problem and individuals cannot affect it in isolation.

We have traditional and innovative methods. We have people in all sectors eager working on adaptations. We need national leadership focused on proactive solutions that aren’t myopically trained on technology and profitability. We can’t keep failing to act because the solution isn’t glittery, and no one can make money from it.

I believe we the people are ready. We are doing our individual part growing food, managing forests, decreasing our household carbon footprints, helping our neighbors through severe weather. We need our state and national institutions to follow our example, do their jobs, and lead.