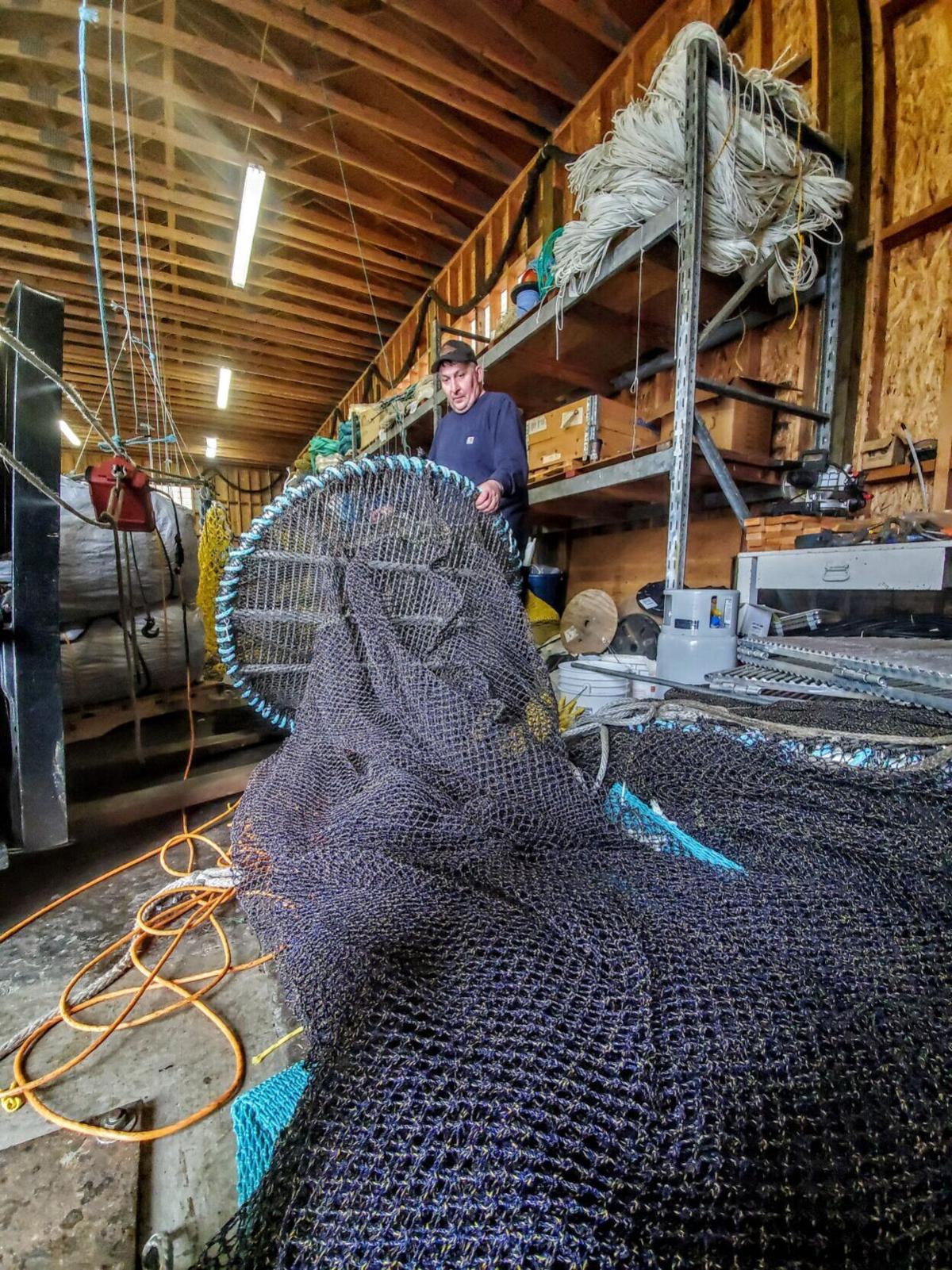 Shawn Lafontaine, net builder, holds up a shrimp net made with a grill to help keep out unwanted species. 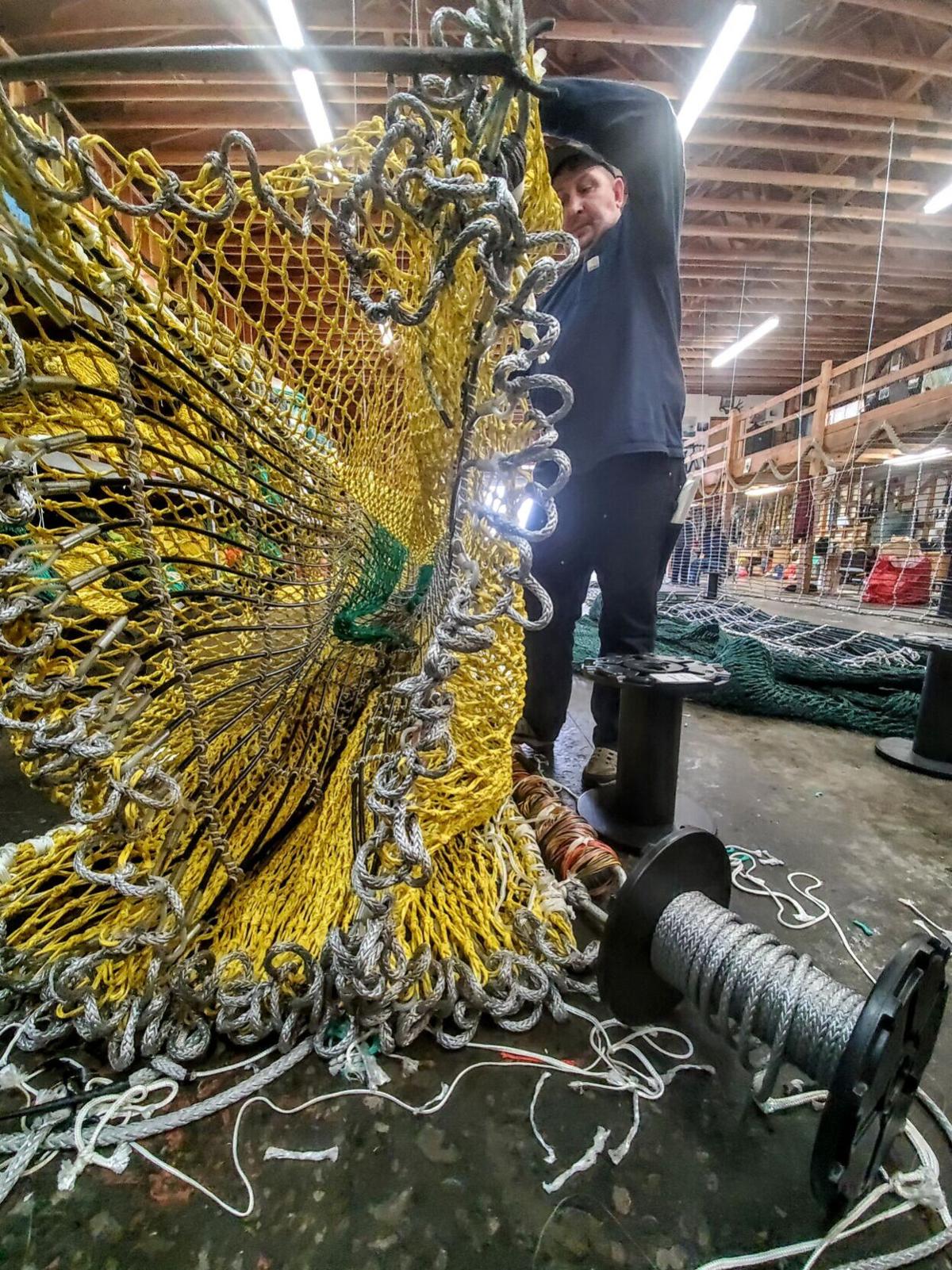 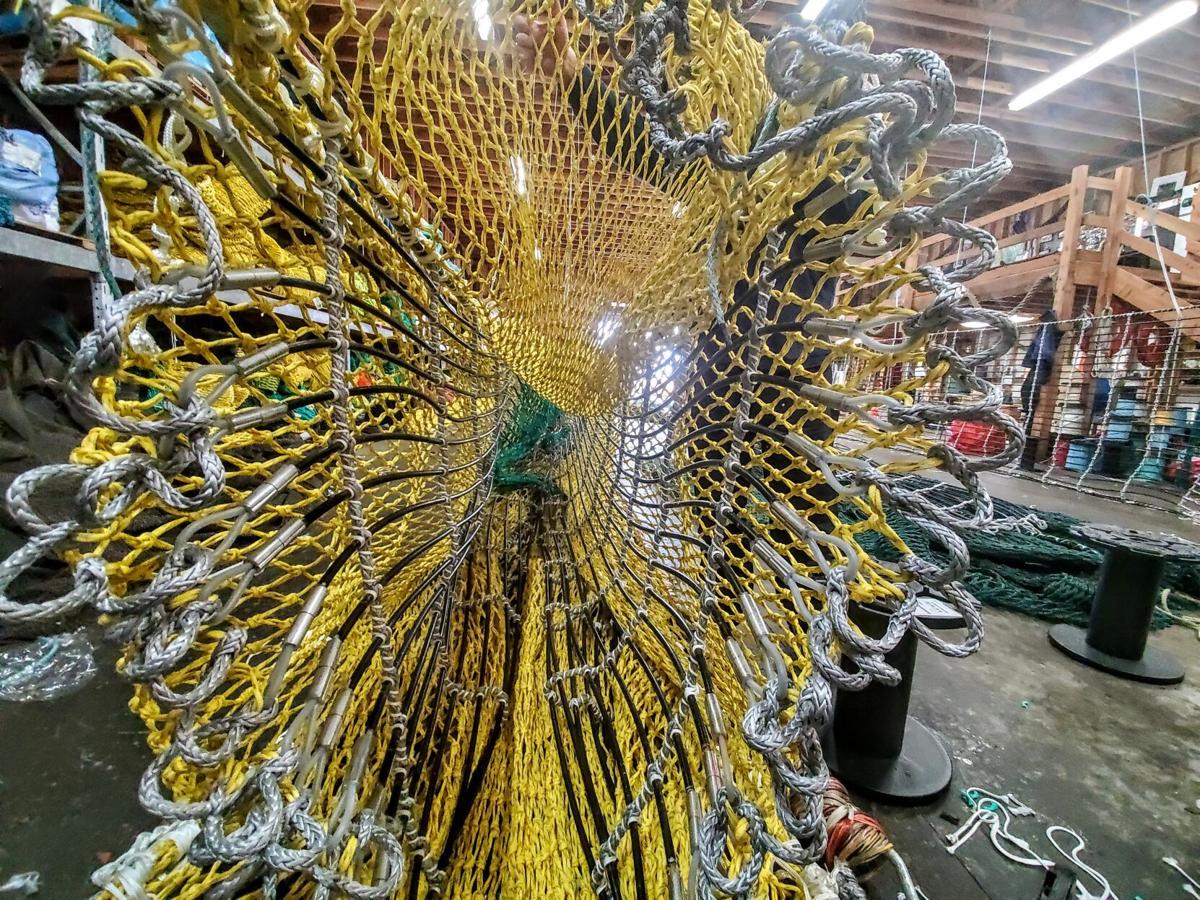 Foulweather Trawl is known for its sustainable-style net making, focused on merging science and industry into a successful combination. 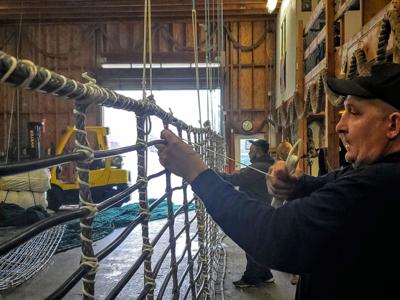 NEWPORT — In an industrial building near the port, men worked on a fishing net to the sounds of the radio, the rain, and the “click-click” of needles working the twine.

“It’s not noisy,” said Sara Skamser, owner of Newport’s Foulweather Trawl, one of the last fully operational netmaking companies on the South Coast.

When it comes to making nets, Skamser said it is best described as knitting. Except she uses rope and twine instead of yarn.

“It’s a lot of like making clothes,” she said.

The basic material is commercial-grade fish netting, mostly polyethene from Japan or Ireland. It arrives in a bale that’s about the size of a bale of hay.

When the bale of netting arrives, it is opened “like a bolt of cloth” and pieces are then cut out and assembled into the shape of whichever net is being made. Rather than shaping the pieces into a pair of pants, Skamser said you would shape it, for example, into a funnel-shaped trawl net.

“Then you use a needle full of twine and sew the seams,” she said. At Foulweather Trawl, that process is referred to as “lacing” and that needle is almost a foot long. “That’s how the shape and structure start coming together.”

To make the net rugged enough to be pulled on and off a vessel, and tough enough to hold fish, ropes are then put on the laced seams to give it strength.

Skamser started the business in 1984 with her husband, John, but never thought she would end up in such a niche market.

“We are the last full-service net shop left,” she said.

Over the years, her business has stood out with its specialized nets designed to keep out unwanted fish. The style, spearheaded by scientists, made net fishing much more precise. That has earned Foulweather Trawl a customer base from Monterey Bay, Calif. to Neah Bay, Wash., and from Kodiak to Akutan, Alaska, as well as the Aleutian chain.

“So almost the entire ring of fire,” she said.

Skamser fell into the business because she was broke, having moved to Oregon from Wisconsin to pursue commercial fishing and crabbing. She was on the lookout for year-round work when she noticed a group of women eating lunch at a local restaurant.

“They’d eat their meal and leave,” she remembered. “I asked what they do and was told they worked on fishing nets.”

Curious, she went over to the netmaking shop, got a job, and hated it at first because she didn’t understand the complicated craft.

“There were several women … and they were encouraging, said I wasn’t seeing ‘it’ yet,” she recalled.

That ‘it’ was the various meshes, the pattern that ultimately creates a four-sided diamond and catches fish. Different fisheries have different sizes. For example, she said, an inch and a half diamond mesh catch shrimp while a five and a half inch mesh catches ground fish.

She finally realized making nets followed the same pattern as the embroidery and knitting she’d learned when she was young.

One of the important techniques in net making is the speed. Skamser said that it can take up to three years to master the skill.

“You have to keep your hands moving to get fast,” she said. “You don’t want to interrupt the rhythm… The fastest guy doesn’t even look like he’s working because he’s got the coordination down.”

Skamser said that the concentration required to make nets is also what gets people through the pain in their hands after hours of work.

“…You work until the pain goes away and you can’t feel anything,” she said, explaining that it is often worse in cold weather because “you can’t wear gloves to work on the net and we work outside a lot on bigger nets.”

Each net is designed specifically for each fishery, and for each port along the coast. Producing high-quality, eco-friendly nets requires strong collaboration with scientists and fishermen, incorporating technology that narrows the type of fish caught and excludes endangered species or fish that are out of season.

This technology includes a BBQ-style grill on the shrimp nets, which have an inch and half mesh to catch the small pink cold-water shrimp and can be filtered by size. The grill keeps bigger fish from being caught and was designed by the Oregon Department of Fish and Wildlife. Skamser explained that the grill size varies and is not at the open part of the net.

“(The grill) allows everything in the net an opportunity to get out because the only thing they’re catching is shrimp,” she said. “Everything else shoots out….”

She said that most of the nets made at the shop are generated by “smart science, smart fishermen, and seeing what might come down the pike.”

This partnership protects ocean populations from being overfished, while also benefiting fishermen by keeping them in business. Skamser said that by sharing information and following regulations, there hopefully won’t be a need for another fishery shut down like what was seen in the 1990s when ground fishing was restricted. It opened again a decade later.

“Fishermen know the ocean, we know the gear, and (scientists) know the science. It’s a great working relationship.”

At the end of the day, Skamser said, fishermen come into the shop and look at the nets like they are artwork.

“They’ll come in and touch the nets, shake their heads and look at us,” she said, then laughed. “And we’re like, ‘Yeah, we give it to you and all you do is make it dirty and rip it up. Thanks a lot.’”

But the goal is for fishermen to feel good when they get the net.

“If it looks good, the fishermen are confident,” she said.

Jillian Farmer is a freelance writer who lives in Coos Bay.