You have permission to edit this article.
Edit
Home
Subscriber Services
Cover Story
The Land
Making a Living
The Culture
Features
Views
e-Edition
Share This
1 of 7 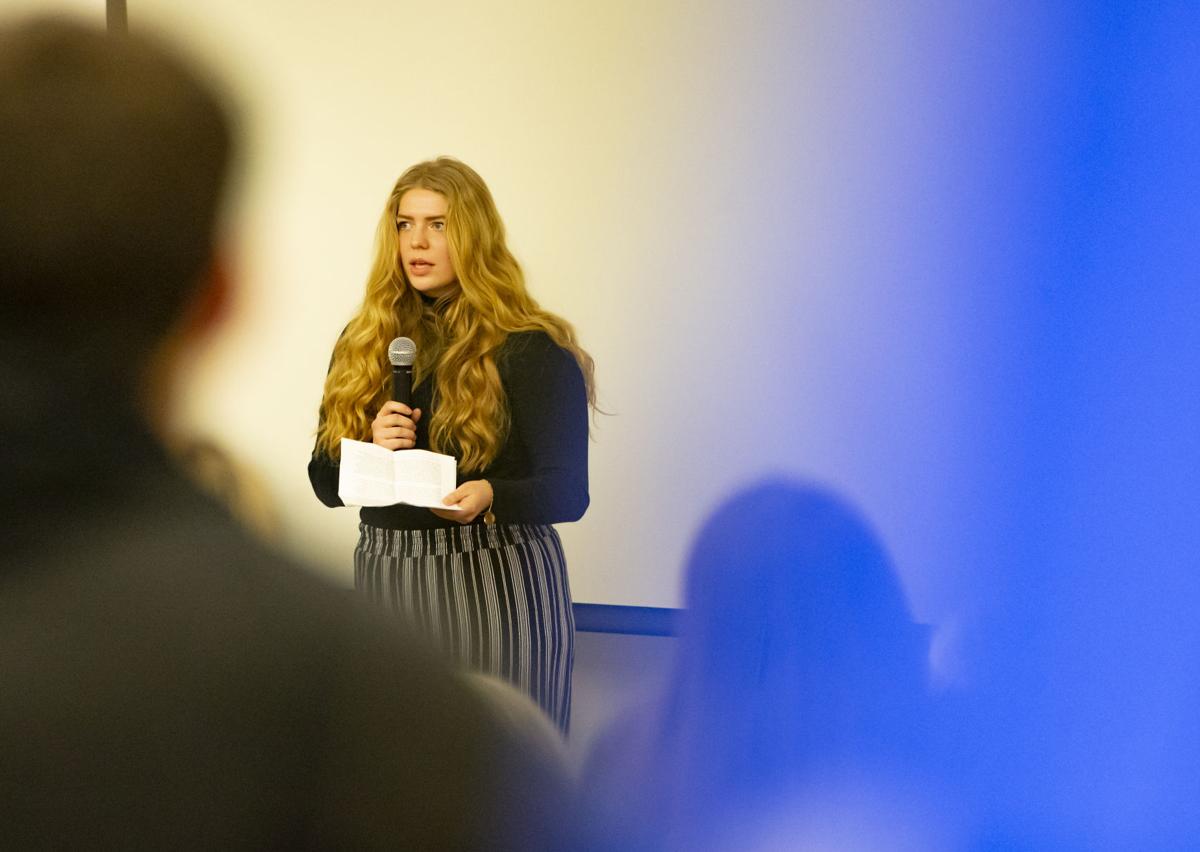 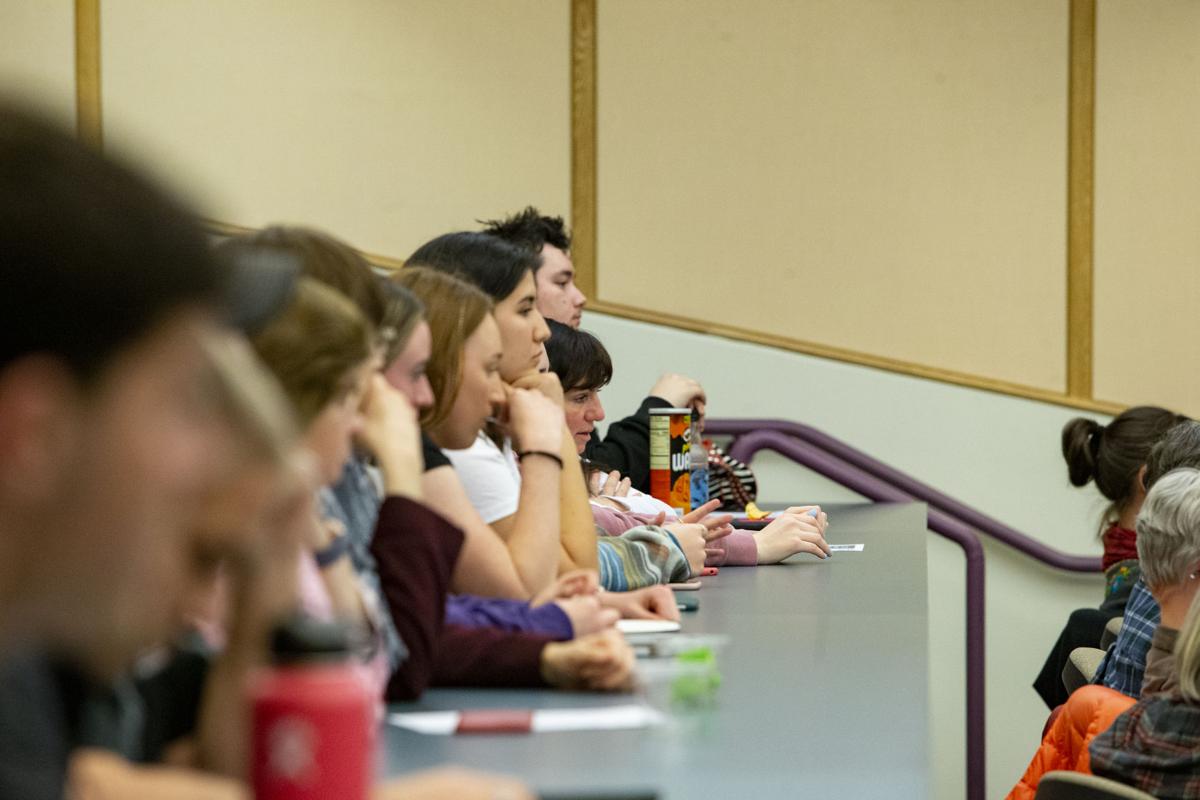 Attendees at the EOC3 climate forum Tuesday night watch as a selection of youth speakers share their views on climate change. 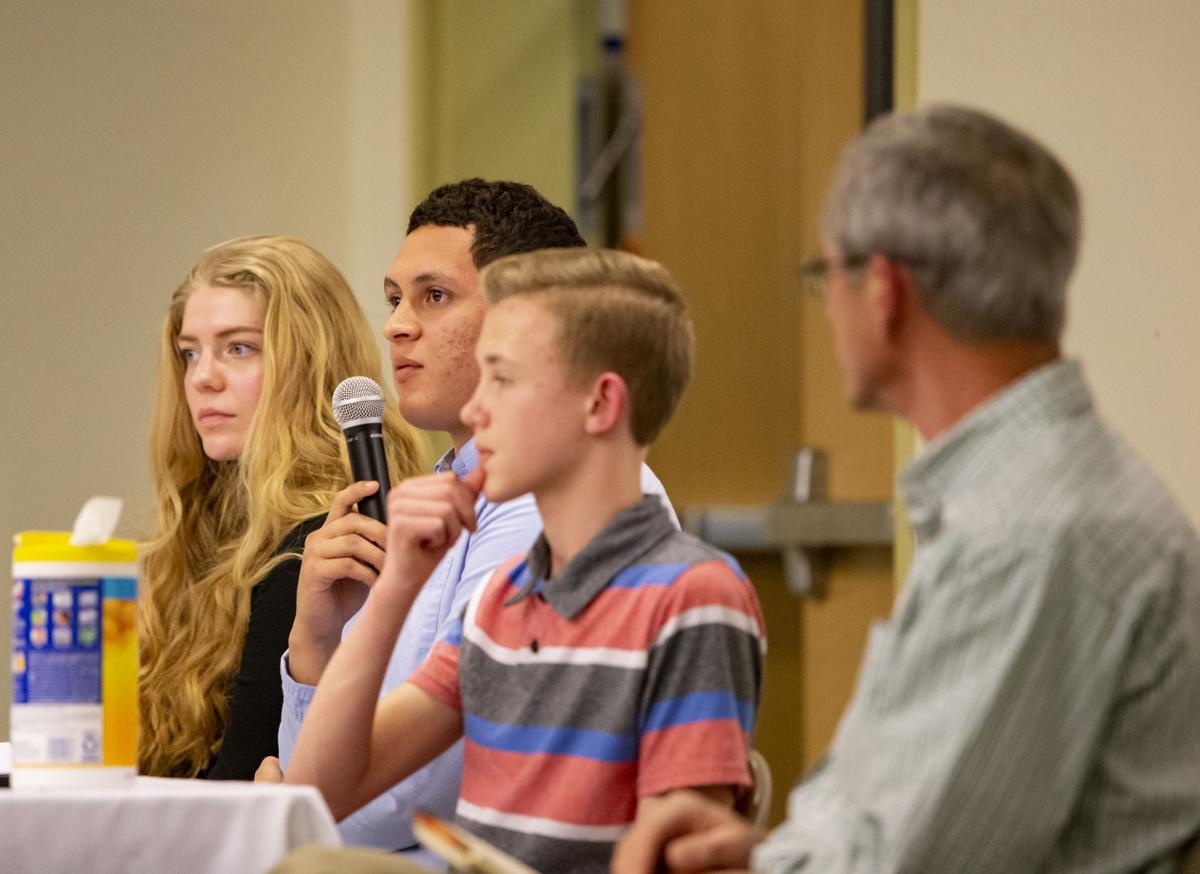 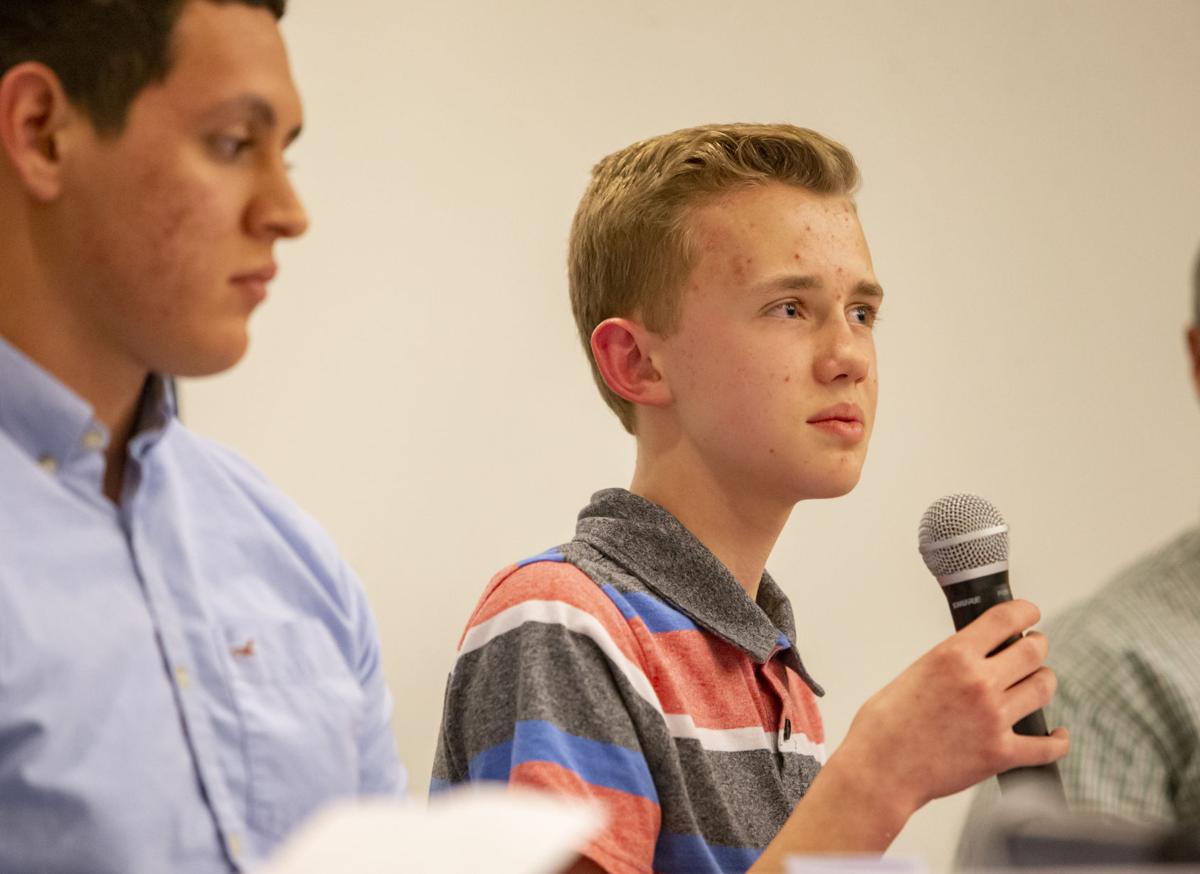 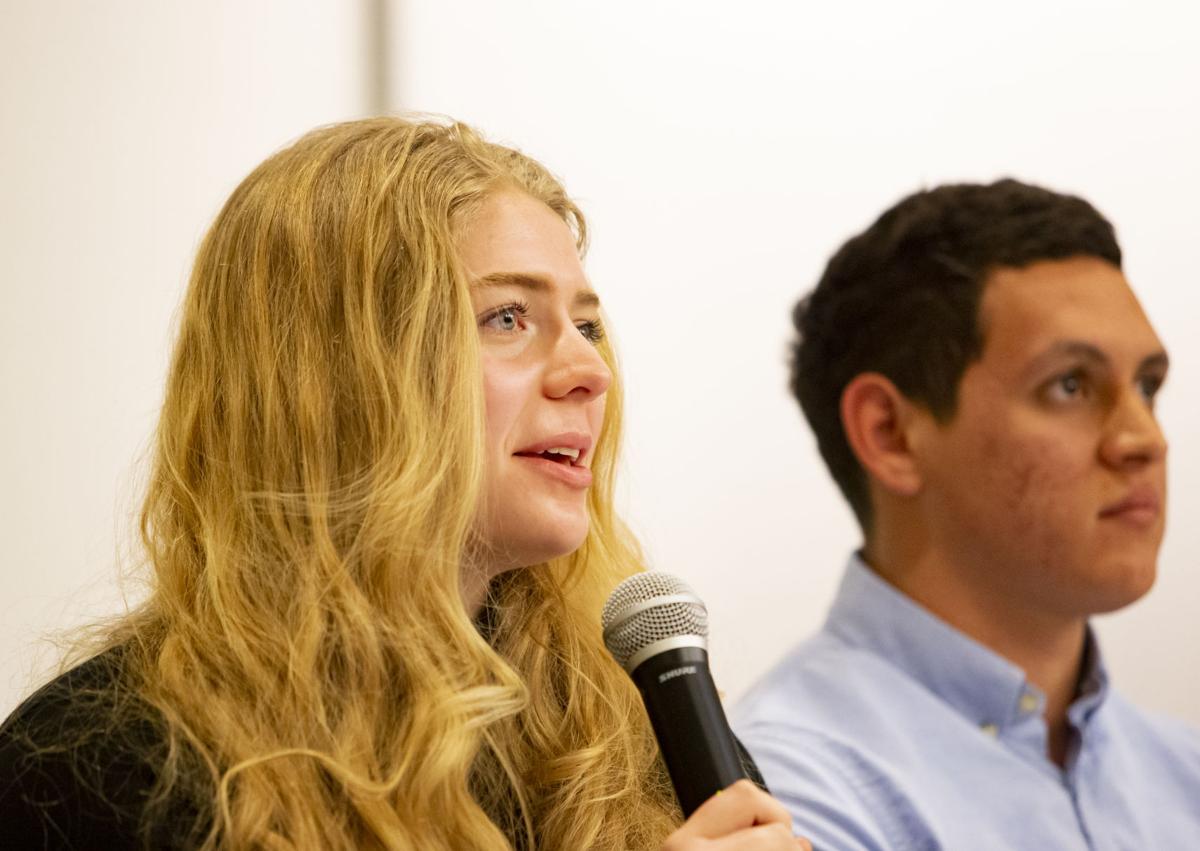 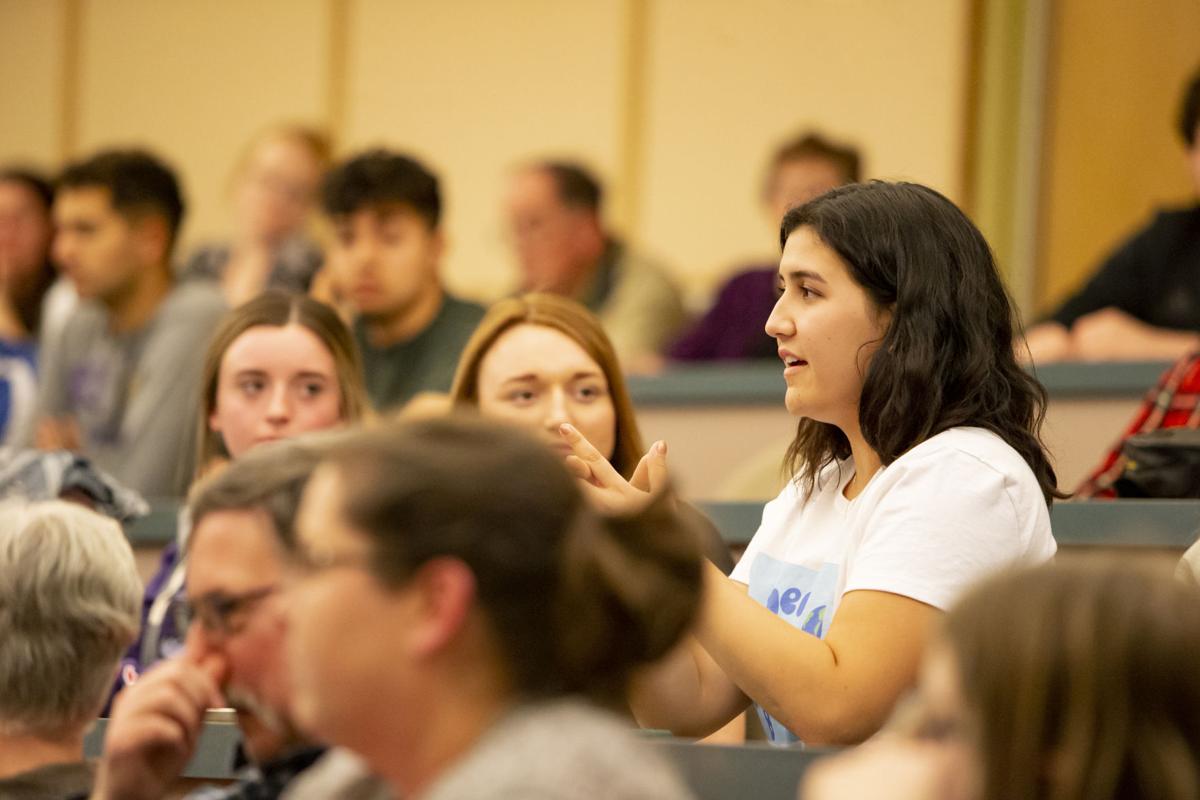 Alysha Martinez, 17, rebuts a fellow crowd member’s views on climate change being a problem for the younger generation to solve. Martinez said that climate change is an issue that needs to be addressed by those of all ages through teaching and actions. 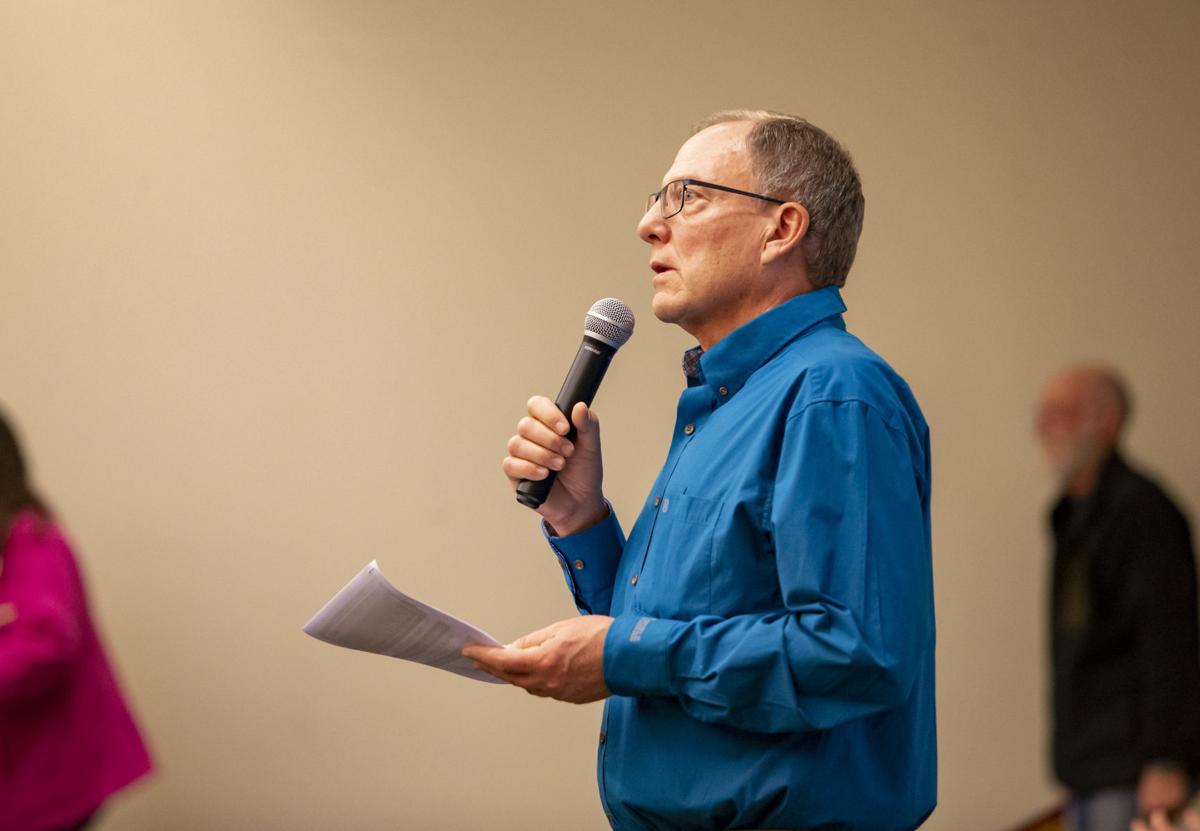 Attendees at the EOC3 climate forum Tuesday night watch as a selection of youth speakers share their views on climate change.

Alysha Martinez, 17, rebuts a fellow crowd member’s views on climate change being a problem for the younger generation to solve. Martinez said that climate change is an issue that needs to be addressed by those of all ages through teaching and actions.

PENDLETON — As three local teens talked about the dangers of climate change at Blue Mountain Community College, the air in the room got noticeably heavier and warmer.

It wasn’t necessarily climate change in action, but it did prove that the issue had the ability to generate local interest, as about 100 people crowded into a lecture hall in the college’s science and technology building on Tuesday evening.

The forum was hosted by the Eastern Oregon Climate Change Coalition, and Chairman Dave Powell explained to the audience why he invited Heppner eighth-grader Hunter Houck, Riverside High School senior Ivan Salgado and Pendleton High School senior Ashlynn Madril to come speak to an audience that skewed much older.

The prospect of having to deal with the effects of climate change was upsetting to Salgado, a Boardman resident who plans to pursue a business degree at Portland State University after a stint in the National Guard.

Salgado condemned “the destruction, arrogance, hate and blindness that we have created on our Earth,” going on to reference the Australian wildfires that killed dozens of people and hundreds of millions of animals last year.

“Our parents and (previous) generations have told us that we have everything,” he said. “That we are spoiled and everything has been given to us. But they are wrong. Because what they have given to us is the planet as it is and what they have done (to it).”

Houck has experience organizing climate protests in his native Heppner, but on Tuesday, he elected for a PowerPoint presentation.

He explained how an increase in carbon emissions traps heat from the sun in the Earth’s atmosphere, and how a steadily warming climate would soon lead to food scarcity, wildlife extinctions and underwater cities.

“Instead of just being social media advocates and activists, we need to make small changes or large changes in our lives to demonstrate that we are doing something to help,” he said.

Madril aimed for a middle ground between Salgado’s passionate speech and Houck’s data-driven approach, saying she had neither the inspirational ability nor a slide show.

She did talk about how she was concerned about how climate change would affect the national parks and forests she loved to visit, and although she encouraged personal efforts to combat climate change, corporations need to reduce their carbon emissions to affect real change.

EOC3 eventually opened up the forum to audience questions, with the crowd prompting the teens to expand on their thoughts on global warming.

For example, did they think population control should play a role in climate change? In a word, no.

Another question from the audience, if youths were more inclined to take climate change seriously, should the U.S. lower the voting age to 16? No, because students their age tended to focus more on high school than electoral politics.

Another question the teens were asked, should youths give up technology to reduce climate change? Their response? No, because technology could also be a part of the solution.

But some questions brought out more nuanced answers from the presenters.

One audience member asked if young people should start engaging in more civil disobedience like the tactics evinced by grassroots movements like Extinction Rebellion, a prospect an activist like Houck wasn’t too keen on.

A question on how climate change would affect agriculture brought out a personal answer from Salgado, who remembered working in the fields with his family and how some days were too hot to plant crops.

An audience member query about how to persuade climate change skeptics brought out varying answers from the panel.

While Houck thought facts were the best way to convince climate deniers, Madril thought an emotional appeal might be more effective.

“I think that sometimes presenting them with facts don’t always work, because sometimes people argue with facts,” she said. “I think a good way to address denial is a use of emotion. Like Ivan said, the videos of Australia where the animals are being burned alive and their home is being ruined, no one likes that. People are going to feel impacted because it’s hurting people’s emotions … I think empathy is one of humankind’s strongest motivators.”

All three said some of their peers feel the same way they do, but high school students would have more solidarity if the issue was taught in schools instead of having to research climate change themselves.

While many people involved in the discussion talked about the teens’ generation would be responsible for trying to reduce climate change, one audience member pushed back.

“We are confronting this crisis on our own as a generation, but it can’t just be us,” Pendleton High School senior Alysha Martinez said.

Whatever moments of dissension there were, everyone on the panel agreed that people needed to vote for people and policies that were committed to fighting climate change.